[ Editor’s note: The spreading of freedom and democracy silliness has some of its ugly side reviewed below in Mr. Berger’s NEO article, the most important being the long use of US Intelligence in international economic policy that should have been more public policy but was classified.

The main reason for this was to lessen the exposure of blowback from dollar devaluation, which has two sides to it.

While many are 100% critics of it all, they censor out all of the benefits that foreign countries received, which was the investment and trade credits made available through the use of the Federal Reserve banking system, in which financially strapped post-WWII countries had little to invest .

And yes, it is fair to say that the US ended up with an inflated dollar value, but all those who used the dollar as an inflation and currency hedge did quite well for themselves and their countries by providing economic stability.

The key issue is whether so much of this was done in secret for geopolitical thuggery reasons, or for the Plain Jane graft, where people in high government office wanted to reward their backers by hard wiring them into major economic shifts, which was insider trading at the top-drawer level.

That said, there was also an obvious security issue involved in knocking some European heads together, so as not to fall back into their own divide and conquer rivalries, when the US obviously wanted a united front structure to face the Soviet Union that was in the heart of Europe at the time.

A lot of nasty things were done, as the Cold War lasted a long time, but we don’t see many people concerned anymore about what the Soviets and the East European Communist states were doing during that time. There is no soul baring going on, nor concern for context, despite some really nasty people running the USSR for a long time… Jim W. Dean ]

As the decades go by we witness the change of leaders, governments, and alliances, but US policies remain the same. American leaders grew accustomed to applying pressure on other states, seeking ways to occupy the position of puppeteer that controls capitulating proxies across the globe. 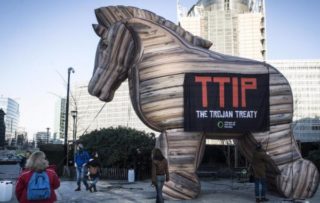 Certain politicians that would prefer to yield to the extensive amount of pressure applied on them are to discover relatively soon that the US is only defending its own geopolitical interests, often at the expense of other states.

It’s no wonder that US President Barack Obama has recently declared that America must write the rules while other countries have no other option but to follow them, and it would never be the other way around.

At the beginning of its march towards hegemony, back in 1913, the United States’ share of world industrial production was 35.8%. Just before the World War II it grew to the level of 40%, to then bring it to its peak at around mid 50’s at 54.5%. In the 1960s the US share started shrinking gradually, falling to 46%.

To compensate its falling outputs, the US started to seek ways of taking advantage of its partners in the European Union. After all, it was Washington that drove European integration in the late 1940s, and funded it covertly under the Truman, Eisenhower, Kennedy, Johnson, and Nixon administrations.

The fact that the European Union has been an American project from day one has recently been uncovered by The Daily Telegraph. Moreover, it was designed and put into existence by the CIA. The DT would note:

The Schuman Declaration that set the tone of Franco-German reconciliation – and would lead by stages to the European Community – was cooked up by the US Secretary of State Dean Acheson at a meeting in Foggy Bottom. “It all began in Washington,” said Robert Schuman’s chief of staff.

It was the Truman administration that browbeat the French to reach a modus vivendi with Germany in the early post-War years, even threatening to cut off US Marshall aid at a furious meeting with recalcitrant French leaders they resisted in September 1950.

The Telegraph would go one step further by claiming that the declassified State Department documents showed that US intelligence agencies have been funding the European movement secretly for decades and worked aggressively behind the scenes to push Britain into the project. For example, a document signed by US General William Donovan on 26 July 1950 states that there was going to be a massive campaign to promote the European Parliament.

Similar documents show that the CIA’s predecessor – the Office of the Coordinator of Information and the CIA itself consistently prevented the founders of the European Union from seeking alternative sources of funding, which would have allowed them to reduce their dependence on the US. 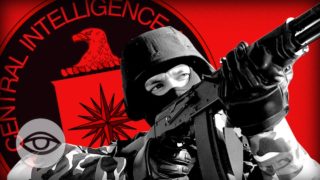 The Telegraph notes that the relations between the US and EU may be irritated at times, but the US has relied on the EU ever since the creation of the European Parliament as the anchor to American regional interests alongside NATO.

If we are to look at the amount of time, resources and money that Washington has spent to ensure that the EU will remain obedient, it’s not surprising that it keeps pushing the Transatlantic Trade and Investment Partnership (TTIP) down its throat. This, even though the fact is clear that the US has everything to gain from this deal, while Europe can only further compromise its financial and economic interests by signing it.

This fact has recently been stressed by the influential German newspaper Sueddeutsche Zeitung alongside two German TV channels: WDR and NDR. These media sources found the courage to publish leaked classified documents about the nature of the TTIP agreement, which were handed over to them by Greenpeace.

Those publications provided the citizens of both continents with an opportunity to impartially assess the nature of the negotiations between the US and EU, since the general public has been kept in the dark for over three years on this.

Initially, when the EU openly published its proposals, the US decided to make its demands a secret, which resulted in massive demonstrations across Europe. At the end of the day the Sueddeutsche Zeitung has come to the conclusion that the US has been applying far more pressure on Europe than one would assume.

The Independent would note that:

The leaks could be enough to destabilise the deal completely, according to campaigners who have claimed that the agreement couldn’t survive the leaks.

They indicate that the US is looking strongly to change regulation in Europe to lessen the protections on the environment, consumer rights and other positions that the EU affords to its citizens. Representatives for each side appear to have found that they have run into “irreconcilable” differences that could undermine the signing of the landmark and highly controversial trade deal, campaigners say.

Curiously, a similar situation has occurred with the Trans-Pacific Partnership (TPP) which Washington seeks to impose upon the states of the Asia-Pacific region, in order to secure utter and complete domination over it.

However, it’s unlikely that EU leaders or Asia-Pacific politicians would be able to proceed with negotiations, since the amount of PR damage that could be inflicted upon themselves by signing TTIP or TPP is inconceivable. And it seems that should people learn the degree of CIA involvement in these affairs, the talks would come to a screeching halt altogether.