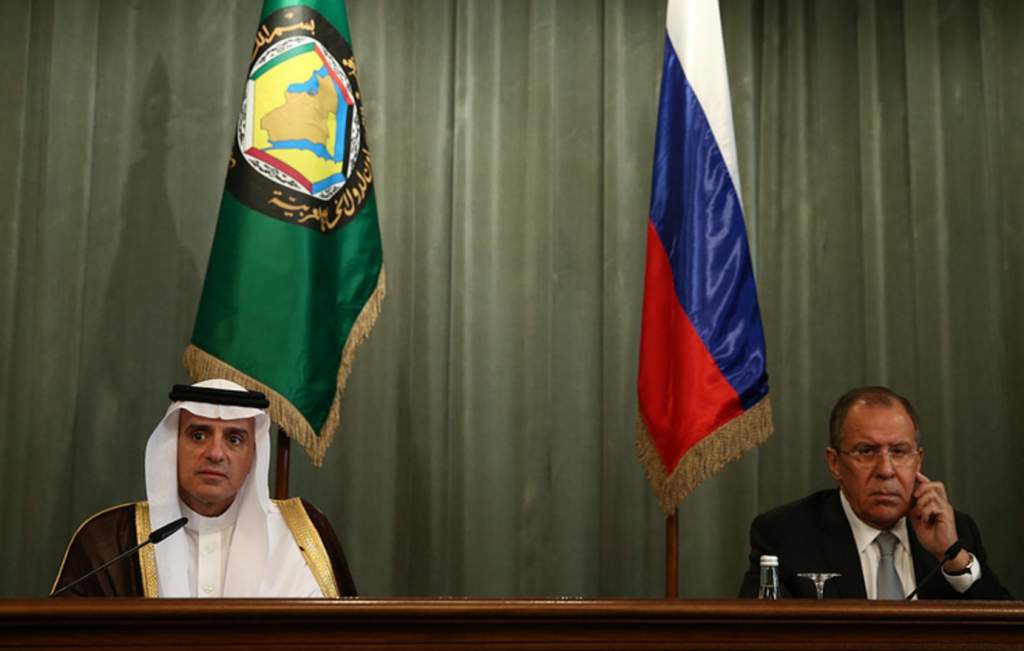 MOSCOW, May 26. /TASS/. Riyadh has formed a fairly representational delegation of the Syrian opposition, which, along with another couple of groups is a key player at the Geneva talks with the government, Russian Foreign Minister Sergey Lavrov said on Thursday.

“I am certain that our friends from the Cooperation Council for the Arab States of the Gulf, including Saudi Arabia, are interested in holding the next round as soon as possible and in the general acceleration of the intra-Syrian negotiating process with a view to approaching the fulfillment of the tasks set by the UN Security Council,” he said.

Russia unhappy new round of talks to begin after Ramadan

The minister has also called on the West to push the Syrian opposition toward talks instead of setting deadlines for establishing the administrative mechanism in Syria.

“With the lack of any desire to speed up inter-Syrian dialogue, some of our Western colleagues begin to say that August 1 is the deadline for establishing the joint administrative mechanism [between Syrian authorities and opposition],” Lavrov said. “If you set any dates that were not approved by UN Security Council, you should at least push your patronized groupings toward sitting down at the negotiations table. Otherwise, it’s a profanation,” he added. “Originally we, the UN Security Council, reserved about 18 months for the whole process and the countdown seemed to have begun,” Lavrov said. “The sole problem is: for the first step to be taken and governing machinery established it is necessary for the Syrians to come to the negotiating table and agree on the personalities, composition and functions.”

“Attempts to bring them [the government and the opposition in Syria] to the negotiating table have failed so far. The UN Secretary General’s special envoy, Staffan de Mistura, held a couple of indirect rounds, working as a go-between,” Lavrov went on to say.

“When we held another meeting of the Syria Support Group in Vienna on May 17 and everybody encouraged de Mistura to go ahead with his efforts we expected that another intra-Syrian round of talks would be called in May and the process will accelerate.”

“Now there have been reports that such a round of talks will hardly be called before the holy Muslim month of Ramadan [in most Muslim countries Ramadan this year will last from June 11 to July 10 – TASS],” Lavrov said. “We are unhappy about that, let us be frank.”

“While there is no wish to speed up the intra-Syrian dialog some of our Western counterparts are beginning to say that August 1 is the deadline for creating a joint governing machinery (between the Syrian authorities and the opposition – TASS), – Lavrov said. “If some deadlines are to be set which nobody has approved in the UN Security Council, those within the sphere of influence should be at least urged to come to the negotiating table. Otherwise this is sheer nonsense.”

Mideast issues should be solved based on international law

The diplomat has stressed that Russia and the Arab states of the Gulf are in favor of settling the Middle East problems based on international law through national dialogue.

“We don’t have absolutely the same views on each aspect of any given crisis situation in the Middle East region,” he said. “But the general conclusion that we have made today is that over these years we have learnt to better understand the positions of each other and also attained a really (new) level of coordination on a number of important issues.”

“Both sides stressed that problems of the Middle East region countries should be settled based on respect for international law through an inclusive national dialogue, with respect for the independence and territorial integrity of all states”, the Russian foreign minister said.

At the same time, according to Lavrov, is necessary to ensure “equal rights and freedoms for various religious groups.”