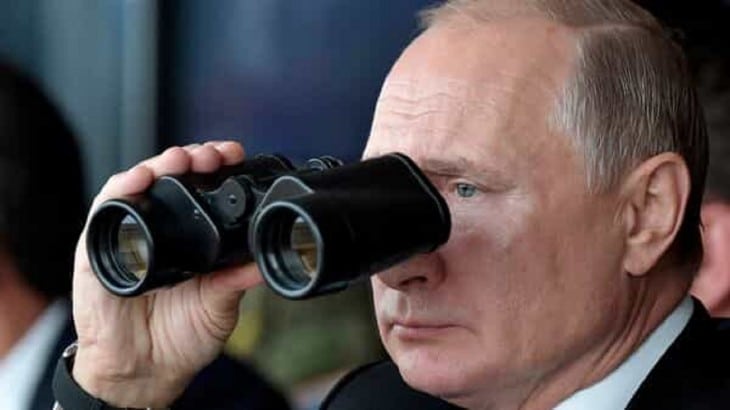 Russia continues to show ISIS that they will have to taste their own bitter medicine in Syria. Since last September, the terrorist group which was purported to decimate the Assad government is now being decimated by Russia. Evgeny Lukyanov, the deputy head of Russia’s top security body, has said:

“We estimate that at the beginning of our operation Al-Nusra Front and Islamic State possessed about 80,000 fighters, of whom 28,000 (35 percent) have already been eliminated. This is [the result of] our actions together with the Syrian Army.

“There were people predicting that it [Russia’s anti-terrorist operation in Syria] would result in another Afghanistan or something like that. That would never be. There are only limited military plans.”[1]

It is pretty obvious that New World Order agents do not like what Russia has been doing in Syria and elsewhere. Their plan was to remove Assad from power as soon as possible, but Assad is here to stay. He ain’t moving.

Obviously, NATO does not like that. Obviously, that is one reason why they have been moving to Russia’s borders illegally. What’s even more risible is that they move to Russia’s territory unlawfully and then turn around and blame Russia for being “aggressive”! Perhaps Russia needs to send NATO an ultimatum saying that they have the military mechanism to control them.[2]

In any event, Russia, Lukyanov added, has changed the political equation in Syria, and “only those politically motivated could deny that fact or interpret it differently.”[3]

We all know by now who those “politically motivated” are. They are New World Order agents and Satanists who simply refuse to act according to the dictate of practical reason in the political firmament. They want bloodshed by all means, and they are not going to be ripped by anything logical or sensible.

As we have shown in the past, one of those flaming Satanists is none other than Jewish Neocon Daniel Pipes, who postulated in 2013 that the West needed to support both the Assad government and the Syrian rebels/terrorists so that they could end up killing each other. Lest you think that Jonas E. Alexis is just taking Pipes out of context, listen to Pipes’ own words again:

Whether Pipes likes it or not, he is indeed a Satanist wearing a nice suit. Robert D. Hare would probably call him a thorough psychopath because he has obviously buried his conscience beneath the avalanche of a diabolical ideology.[5] Pipes’ essentially Talmudic statement would almost certainly make Anton Lavey blush.

Pipes also proves that Ayatollah Khomeini was right on target when he advanced “the Great Satan” idea to describe how America has been used to subjugate “the deprived and oppressed people of the world.” Khomeini continued to say (and his lecture was delivered in 1980!):

“There is no crime America will not commit in order to maintain its political, economic, cultural, and military domination of those parts of the world where it predominates.

“It exploits the oppressed people of the world by means of the large-scale propaganda campaigns that are coordinated for it by international Zionism. By means of its hidden and treacherous agents, it sucks the blood of the defenseless people as if it alone, together with its satellites, had the right to live in this world.”[6]

But Pipes is far from alone. There are other Satanists out there who have already taken a similar view. We have already examined the work of Jewish Neocon Jonah Goldberg, who said explicitly:

“Every ten years or so, the United States needs to pick up some small crappy little country and throw it against the wall, just to show the world we mean business.

“There is nothing we want to see happen in the Middle East that can be accomplished through talking around long tables festooned with bottled water and fresh fruit at Swiss hotels, that cannot be accomplished faster and more permanently through war. But there is plenty that cannot be achieved by such gabfests that can only be achieved through war.

“Wouldn’t an invasion of Iraq result in instability in the region? Yes. But in this context, instability is more likely to be good than bad.”[7]

What are the results of picking up “some small crappy little country” and throwing it “against the wall”?

Well, you get a six-trillion-dollar war, which has already begun to suck the blood out of virtually every single American.[8] You get sodomy in places like Abu Ghraib.[9] You get soldiers literally raping little kids in front of their mothers.[10] You get women being gang-raped by U.S. soldiers in places like Iraq.[11] You get U.S. soldiers ignoring “sexual abuse of boys by Afghan allies.”[12] You get at least 360,000 U.S. soldiers coming home with brain injuries.[13] You get terrorism boiling up virtually all over the Middle East.[14]

You finally get a madman and a psychopath from Tel Aviv telling us all that the 9/11 attack was good for Israel[15] because it opened the door for New World Order agents to perpetuate useless and aimless wars for Israel.[16] What if you resent this diabolical enterprise, particularly the debacle in Iraq?

“[T]his is a war whose aims and purposes make it very hard to understand how anyone who is a supporter of human rights, or who believes in freedom, could be against it. In four years, George Bush has liberated nearly 50 million people in two Islamic countries.

“He has stopped the filling of mass graves and closed down the torture chambers of an oppressive regime. He has encouraged the Iraqis and the people of Afghanistan to begin a political process that give them rights they have not enjoyed in 5,000 years…”[17]

What a coincidence that St. Paul had already dealt with people like Horowitz in the first century and said that they “both killed the Lord Jesus, and their own prophets, and have persecuted us, and they please not God, and are contrary to all men.”

As St. John implicitly articulates, reasonable people will always be at war with people like Horowitz because they have metaphysically and categorically rejected Logos and have embraced an essentially diabolical system that has crippled them morally, intellectually, and spiritually.[18] This is one reason why they have been persecuted through the centuries, and the history books are full of cases where their rebellion against authorities led to one bloody retribution after another.

Jewish historiographers Heinrich Graetz and Solomon Grayzel write that when Jewish revolutionaries revolted against Rome and slaughtered 240,000 Greeks on the island of Cyprus in 115, the Greeks in return slaughtered virtually every Jew on the island.[19] This was not an isolated case. From A.D. 66 to A.D. 135 and beyond, Jewish rebellion led to one sad reprisal after another. E. Michael Jones writes,

“The normally docile Jews in Egypt were also seized with revolutionary fervor, indiscriminately massacring Greeks and Romans. After plundering towns near Alexandria, the Jews boldly attacked the Roman army under general Lupus.

“In their first encounter, the revolutionary spirit of the Jews triumphed over the military experience of the Romans, and Lupus fled. When terrorized Greeks and Romans took to ship on the Nile, the Jews followed them bent on revenge.

“The historian Appian, living then in Alexandria, wrote an account that ‘gives some idea of the terror excited by the Jewish populations.’ The Jews ‘are said to have eaten the flesh of the captive Greeks and Romans, to have smeared themselves in the skins torn off them.’”[20]

What is the solution to all this mess? People ought to be trialed and punished for their crimes. The problem is that we have been allowing what Preston James calls “The Khazarian Mafia” to rule the West without any regard the moral law. If Ted Bundy can go to jail and be executed for killing a couple of people, why aren’t we putting the “Khazarian Mafia” behind bars? What are we to do if they continue to slaughter thousands upon thousands of people in the Middle East and elsewhere in the name of “democracy” and “freedom”?

Perhaps it is time for the West to go back to Sicut Iudeis non, which is counter-revolutionary and which protected the West for centuries against the racist and diabolical ideology of the criminal gang.[21]