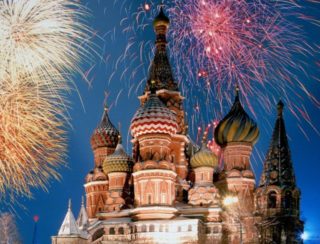 [ Editor’s Note: Putin’s approval continues to be the gold standard for world leadership, and a key factor in the sniping that comes at him from the West, land of the leadership wasteland, despite its longer history of democratic institutions.

The 84% percent who say they would vote to reelect him shows that even some of those who don’t approve of him still acknowledge him as the best pick for leadership. The losers in all this are the Ukrainian coupmeisters or the NATO and Western Intel agencies, who thought they were in the driver’s seat of their New Cold war all-terrain vehicle, which has not put a dent in Putin.

On the contrary, the world public has learned a lot watching the trumped up fear and threat campaigns of the color revolutionaries. All countries now need a constitutionally funded budget item for an Intelligence agency tasked with informing them of everything their government does not want then to know.

I would call this the Neo-Democracy era, when it begins. Our Founding Fathers warned us that being able to keep our Republic would require always knowing what our government was doing. Their context for that was “the free press”, which lies in shreds and tatters now, either having been bought by special interests with looted money, or taken over by Intelligence agencies that view independent press as a threat.

We have a long tough fight to turn this around. We have enough people to counter what is going on, but are losing, in that almost all of our institutions are ducking even having a say in any of this. The most common excuse I get is that it would be divisive for their organization.

When I bat that back at them, pointing out that our country was born out of a divisive American Revolution, which we have always honored… I get only silence… Jim W. Dean ]

According to the research conducted by specialists of the independent Russian company Levada Center, 80 percent of Russians approve of the president’s performance. 19 percent of responders said they were not content with Putin’s presidential course and 1 percent described themselves as undecided. The presidential approval rating has decreased from the peak value of 89 percent registered in late June 2015.

When asked about their opinion on the work of Prime Minister Dmitry Medvedev and the Cabinet in general, 55 percent of Russians said that they considered it worthy of approval while 45 percent disagreed with this position. 2 percent of those polled could not give a direct answer to the question.

The Lower House of the Russian parliament – the State Duma – currently enjoys support of 42 percent of citizens and 56 percent said that they disapproved of the lawmakers’ activities. Again, one percent of responders remained undecided over the issue.

Also, 49 percent of the Russian public told researchers that in their opinion the general course chosen by the country’s authorities was right and 33 percent hold that it is wrong. 18 percent found this question too difficult to answer.

When researchers asked who of Russian politicians enjoyed the most trust among the public, Vladimir Putin was first in the list with 53 percent, followed by Defence Minister Sergey Shoigu with 26 percent and Foreign Minister Sergey Lavrov with 20 percent. 12 percent of Russians said they considered Prime Minister Dmitry Medvedev the person most worthy of their trust and the same share of respondents trusted most Vladimir Zhirinovsky – the founder and all-time leader of the populist nationalist party LDPR.

A different poll conducted about one month ago by the government-owned research center VTSIOM also demonstrated that the overwhelming majority of Russians approved of the work of their president. It also showed that the number of Vladimir Putin supporters is high even among members of opposition parties.

According to VTSIOM, the share of Russians who said they are happy with Vladimir Putin’s performance as president was 82 percent in late April. Even more Russians – 84 percent – said they are ready to vote for Putin at the presidential elections.

According to the The Foundation for Development of Civil Society – the NGO that ordered the poll – the figures showed that the “pro-Putin majority” in Russia currently has significant influence on various public activities and the potential for expansion. The activists also said in comments that the results of the poll demonstrated that the next convocation of the State Duma, which will be elected in September, would be largely pro-Putin.