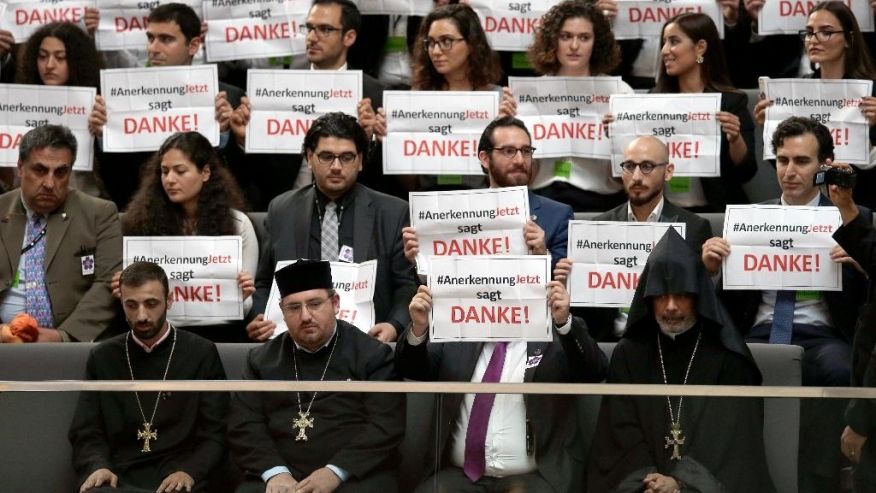 … from Russia Today,  Moscow
–
[ Editor’s Note:  This has been a long time in coming, but one has to ask, “Why now?”, when Merkel had put off the vote for a year. The issue has been a slam dunk forever , but despite modern Turkish governments not having anything to do with, they effectively supported it by trying being holocaust deniers.
–
I have never seen any demands being made for billions in reparations or Turkey to be dismembered to give Armenia more territory. Armenians have not been running terror operations inside Turkey, or anywhere else for that matter, and have been a threat to no one, so what has Turkey been so afraid of?
–
The most buried part of the story is how Jewish Freemasons played the key role in the genocide and have been desperate to keep that hidden. The historical evidence is overwhelming. Here is just one snippet of the effort from the US Jewish Lobby to keep the cork in the bottle.
–

Four large U.S. Jewish groups have lent support to Turkey’s position in opposing the passage of two resolutions pending in Congress that call for official recognition of World War I-era killings of Armenians in the Ottoman Empire as genocide. B’nai B’rith International, the Anti-Defamation League (ADL), the American Jewish Committee and the Jewish Institute for National Security Affairs (JINSA) have recently conveyed a letter from Turkish Jews who oppose the resolution to U.S. congressional leaders, officials from the groups told the Turkish Daily News.

In their letter, leading Turkish Jews have urged congressional leaders to postpone considering the genocide measures. In conveying the letter to Congress officials, the four U.S. Jewish groups tacitly agreed to its contents. Going further, the ADL and JINSA have also added their own statements opposing the bill. – Source: Turkish Daily News, April 26, 2007

As to the timing again, Turkey most recently fired back to the EU that, if it did not get the free visa regime on its own terms, it would not go through on the “tentative” EU refugee agreement. That might be a bluff, as frankly Erdogan wants the money.

–
If you were to assume that all the refugee care contracting business was going into the pockets of his party members, you would probably be right. And with the losses being incurred from the Russian sanctions in the energy and tourism fields, Erdogan’s party members expect the boss to send them some replacement business… Jim W. Dean ]
____________
– 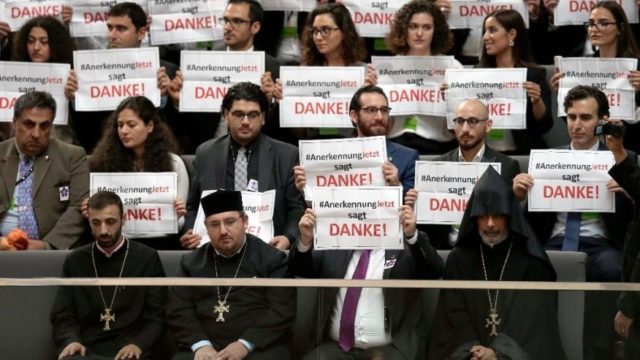 – First published  …  June 02,  2016 –
–
The German parliament has withstood a barrage of pressure from the Turkish government, approving a symbolic resolution that declares the 1915 massacre of Armenians by Ottoman Turkish forces a ‘genocide’.

The vote was almost unanimous in supporting the resolution with just one MP voting against and another abstaining. The move was largely expected and was supported by German Chancellor Angela Merkel. However, the German leader was forced to skip the vote due to prior commitments.

Gregor Gysi, a politician from The Left Party, who was critical of Turkey’s treatment of the Kurds who were doing an excellent job in fighting Islamic State, said that “Germany was a historical accessory” and has a duty to recognize the mass killings of Armenians in the First World War.
–

“We need to call this what it was – a genocide,” he told the parliament. “The Bunderstag should not allow itself to be blackmailed by Turkey’s threats.”

The news was greeted with delight by dozens of Armenian supporters who had gathered outside the parliament building carrying banners commemorating the genocide.

According to the Christian Democratic Union’ Albert Weiler, Germany had a “historical duty” to recognize the mass killings of Armenians.

“Without this admission there cannot be forgiveness and reconciliation. Suffering does not know temporary boundaries. Genocide will never remain in the past. By recognizing the genocide, it will force the Turkish government to take a brave step and look into its own history,” he said. 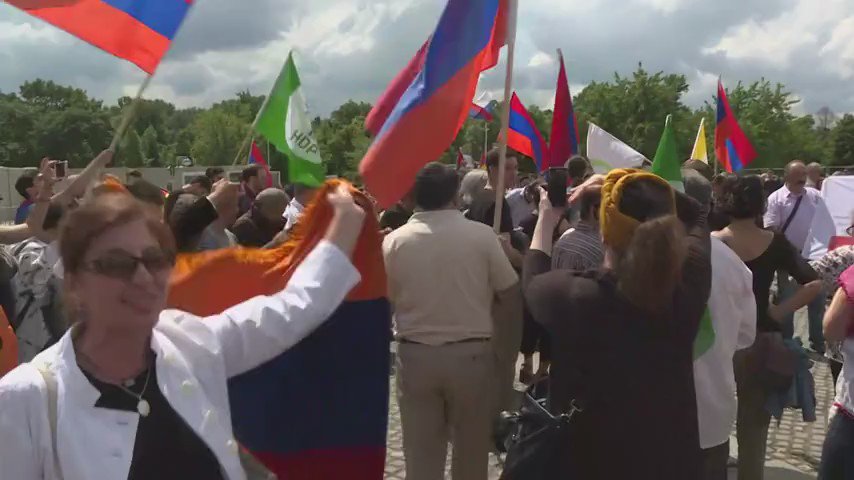 Representatives from the Turkish and Armenian embassies were present in the German parliament while the vote was taking place.

Armenian Foreign Minister Edward Nalbandian praised the German parliament’s decision, saying it demonstrated “Germany’s valuable contribution not only to the international recognition and condemnation of the Armenian Genocide, but also to the universal fight for the prevention of genocides [and] crimes against humanity,” AFP reported.

The ruling AK Party in Turkey responded by saying that the decision taken by the German parliament has seriously damaged relations between the two countries.

The Turkish President Recep Tayyip Erdogan who is on a state visit to Kenya, said that the decision taken by the German parliament will have a serious impact on relations between the two countries.

The Turkish government has already recalled its ambassador to Germany Huseyin Avni Karslioglu, who is expected to arrive back in Turkey on Thursday afternoon. Erdogan added that after Karslioglu returns, the government will discuss what steps Ankara will take in response.

Sections of the German media are worried about what impact the decision by the parliament to recognize the genocide could have on the migrant deal between Turkey and the EU, which has been championed by Merkel.

Speaking after the vote took place, Chancellor Merkel said that Berlin’s relationship with Ankara is broad and strong.

“There is a lot that binds Germany to Turkey and even if we have a difference of opinion on an individual matter, the breadth of our links, our friendship, our strategic ties, is great,” Merkel said, as cited by Reuters.

Thousands of emails have been reportedly sent out by the Turkish community to German MPs, threatening the politicians and calling them names in connection with Berlin’s latest attempts to recognize…

The bloc says the agreement is necessary to stem the tide of migrants heading towards Europe. Some 1.1 million refugees settled in Germany last year. In return, Ankara will receive billions of euro from the EU, while its citizens would also be given visa free travel to the Schengen zone, which encompasses most of Europe.

The parliamentary vote was originally scheduled to take place a year ago to mark the centenary of the genocide, but due to concerns over the fallout with Turkey, Merkel’s allies postponed the move.

The mass killings began on April 24, 1915, when 250 Armenian intellectuals were detained by Ottoman authorities and later executed in their capital, Constantinople, present-day Istanbul.

Most of the Ottoman Empire’s Armenians were subsequently displaced, deported or placed in concentration camps, ostensibly for rebelling against the Ottomans and siding with Russia during World War I. This affected up to 1.5 million Armenians.

Earlier this year, thousands of people around the globe took to the streets to commemorate the 1915 massacre.

Turkey – the successor of the Ottoman Empire – concedes that many Armenians were mistreated at the time, but maintains that the number of victims has been grossly exaggerated and that there was no ‘genocide’.