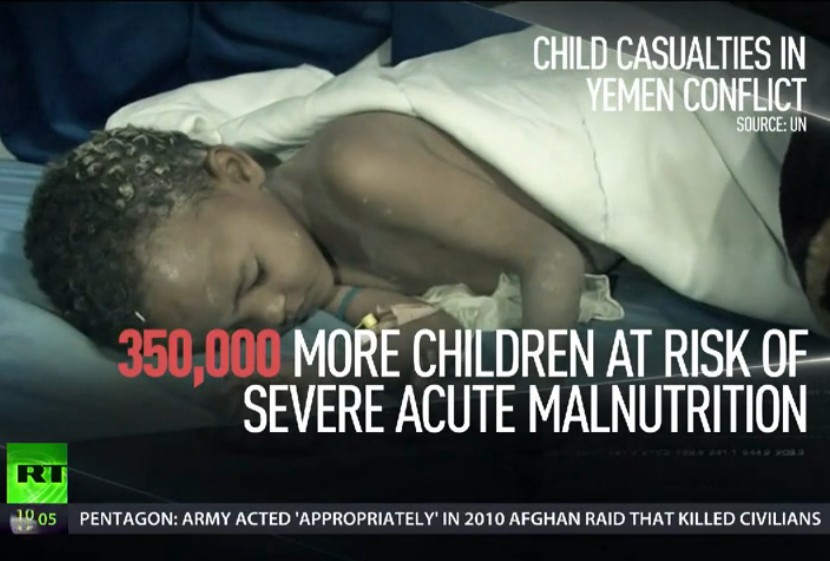 United Nations Secretary-General Ban Ki-moon has slammed the Saudi-led coalition for “killing and maiming” children in Yemen, adding it to an annual blacklist of countries and armed groups that have violated children’s rights in conflict.

“Grave violations against children increased dramatically as a result of the escalating conflict,” a report released by Ban on Thursday states.

“In Yemen, owing to the very large number of violations attributed to the two parties, the Houthis/Ansar Allah and the Saudi Arabia-led coalition are listed for killing and maiming and attacks on schools and hospitals,” the secretary-general stated in the document.

According to the report, the coalition was responsible for 60 percent of child deaths and injuries in Yemen last year, killing 510 people and wounding 667 others.

The coalition was also behind half of the attacks carried out on schools and hospitals in Yemen.

The UN report added the coalition to its blacklist of groups that “engage in the recruitment and use of children, sexual violence against children, the killing and maiming of children, attacks on schools and/or hospitals and attacks or threats of attacks against protected personnel, and the abduction of children.”

The coalition began a military campaign against Houthi rebels in March 2015. It sides with the exiled President Abd Rabbuh Mansur Hadi, while the Houthis are aligned with former President Ali Abdullah Saleh, who resigned in 2012 following a popular uprising against his rule. The conflict has left nearly 4,300 dead since March, half of them civilians, according to UN figures.

The Houthis have been on the UN blacklist for at least five years, and are considered “persistent perpetrators.”

But although the UN’s report cited a deadly US airstrike on a hospital run by Doctors Without Borders (MSF) in Kunduz, Afghanistan, it said the attack was carried out by “international forces” and did not add the US to the blacklist.

Ban did, however, urge all 193 UN member states to ensure their engagements in conflicts comply with international law.

“It is unacceptable that the failure to do so has resulted in numerous violations of children’s rights,” he said.