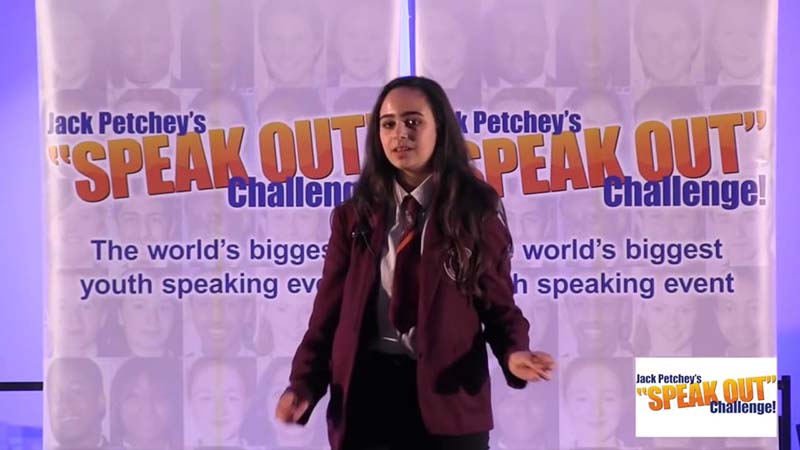 In a highly-regarded public speaking competition 15 year-old Leanne Mohamad, a pupil at Wanstead High School in London, stood up and gave an impassioned speech about the appalling situation back home in the Holy Land. It was so moving that she won the regional final and a video of her speech was posted on the organisers’ website.

Then a blogger called Edgar Davidson complained and Leanne’s speech was deleted. He said it was “full of ignorant lies and blood libels”.

The Speak Out Challenge! operates in nearly every secondary school in London and Essex and claims to be the largest speaking competition for young people in the world. It is run by the charity Speakers Trust and funded by the Jack Petchey Foundation.

It’s a great idea and has worked with 100,000 schoolchildren. Each academic year Speakers Trust trainers visit state schools throughout London and Essex to give Year 10 students a day’s training in public speaking. They are encouraged to “speak out and share their voices with the world” and talk openly and honestly on any subject they feel strongly about. Each school then chooses a representative for the Regional Final. The 37 Regional winners are then whittled down to 15 who go forward to the Grand Final.

Speakers Trust explains: “The 15 Regional Champions perform in front of a panel of prestigious judges and a vast audience in London’s West End in their bid to become the next Speak Out Challenge! Champion.  All those taking part receive a Certificate of Achievement and the top four placed speakers win prize money for themselves and their school.”

So how far did Leanne get in the competition?

Speakers Trust and Jack Petchey Foundation have issued a joint statement saying that she was chosen by a panel of judges as a Regional Final winner and her speech posted online. But after “vile and hateful” comments over the recent Bank Holiday weekend [28 to 30 May] Speakers Trust removed the video of Leanne’s speech.

“We will not tolerate trolling of young people… It was considered essential to protect Leanne by temporarily suspending the regional video until we were able to consult fully with her school and family.”

The judging panel did not select Leanne for the Grand Final, saying their decision was taken before the unpleasantness, but she remains the Redbridge Regional Winner for 2016. However the Jewish Chronicle reported that the Julie Holness, CEO of Speakers Trust, said that Leanne had breached the rules:

“There are two fundamental rules that are made explicit during the training: the speech must have a positive and uplifting message – in fact this is one of the core terms of the agreement with the Jack Petchey Foundation [and] a speaker should never inflame or offend the audience or insult others and this, by definition, means that propaganda is ruled out absolutely from the outset.”

Truth is propaganda and supporters of a criminal regime mustn’t feel upset? If Leanne broke fundamental rules how did she manage to become a Regional winner? Speakers Trust and the Petchey Foundation are at pains to stress that all their young speakers, irrespective of background, race or religion, should be able to speak out in a safe and supportive environment.

However if you post their speeches online you can’t guarantee a polite reception. The online world is neither safe nor necessarily supportive and often has no manners. You must expect opposing and sometimes hateful remarks. But the last thing you should do is cave in to pressure and pull the plug on a good and truthful speech.

A little research would have shown what sort of person Edgar Davidson is. Judge for yourselves from the poison and sarcastic claptrap here, claiming anti-Zionism is always driven by antisemitism

According to the Jewish Press he also runs the “satirical” blog Free Palestine Now but seems to be cross-dressing as Fiona Warburton to do so. The source mentions that he spends most of his time in Israel, so why would anyone in London and Essex care what he says?

What plucky Leanne learns from this is that her elders who teach the art of free speech can’t always be relied on to defend it. In this case they preferred to shame her in favour of the rantings of an obnoxious blogger. She has experienced, at a tender age, a shoddy betrayal of her youthful courage, which is hardly what Wanstead High School intended. I hope this teenage female fireball comes out of it even stronger.

The Palestine embassy chimed in with a press release rightly condemning the decision to silence this British-Palestinian schoolgirl. “Leanne won the regional final of the ‘Speak Out’ Challenge in a speech entitled ‘Birds not Bombs’, which was about being a Palestinian and being denied human rights. She talked of the injustice of living in fear of violence and about health inequalities where Palestinians in Gaza are unable to receive proper medical treatment.

“It is a great shame that such a charity [The Jack Petchey Foundation] which has helped so many young people, sees fit to silence a young voice…  whose family are refugees from Palestine and, before they came to Britain, lived in terrible conditions in Burj Al Barajneh Refugee Camp in Lebanon….  Surely it is exactly such disenfranchised voices that The Jack Petchey Foundation should aim to magnify, not silence.”

The embassy adds that “Palestinians will never be silenced and will never tire of telling the world about the injustices against them.”

The ambassador himself, Manuel Hassassian, says: “The fact that she was silenced and stopped in her tracks by the institutional anti-Palestinian discrimination that haunts so many parts of British public life… shows that we, as Palestinians, still have a lot of work to do. But we will never tire of this work because the oppression we suffer is real and our cause is just.”

Sadly, not many Palestinians actually speak out despite their cause being just. Certainly not the Palestinian leadership.

Did Ambassador Hassassian summon the limmo, go see Leanne and her family, make a fuss of them, present an award with the gratitude of a dispossessed and cruelly abused people tormented by Israel’s never-ending military occupation, and turn a crushing disappointment for the young girl into a heroic, human story with irresistible appeal to press and TV? Apparently not. And there’s the problem.

Prof Hassassian has been Palestine’s senior representative at the communication and media centre of the  West, London, for the last 10 years, during which he has made little impact and circumstances for his people have gone from bad to worse. Lack of progress can be equally blamed on the faceless people he works for – the Palestinian Authority and the useless PLO (Palestinian Liberation Organisation) now led by the world’s most hopeless negotiator Saeb Erekat, and the so-called Government of the State of Palestine of prime minister Rami Hamdallah.

All are controlled by Mahmoud Abbas whom everyone would love to see the back of. Some say Hassassian is under orders not to rock the boat mediawise. I can believe it.

Rivals Hamas are no better. They tell us nothing even though they recently appointed a high-powered media chief. Either he’s just as pathetic as his PA/PLO’s counterparts or he too is under orders to stay shtum. The upshot is that the Palestinian people continue to get a raw deal, continue to have no hope and continue to get viciously trodden on… and the West remains uninformed or misinformed, certainly not well-informed. Israeli propaganda goes unchallenged.

Those who work hardest at telling the Palestinians’ story are non-Palestinians, an assortment of unpaid activists, writers and campaigners in the West. The well-paid officials of the PA, the PLO, Hamdallah’s outfit and Hamas’s politbureau sit on their backsides doing nothing sensible in broadcasting terms to advance the Palestinian cause. It’s left to youngsters like Leanne.