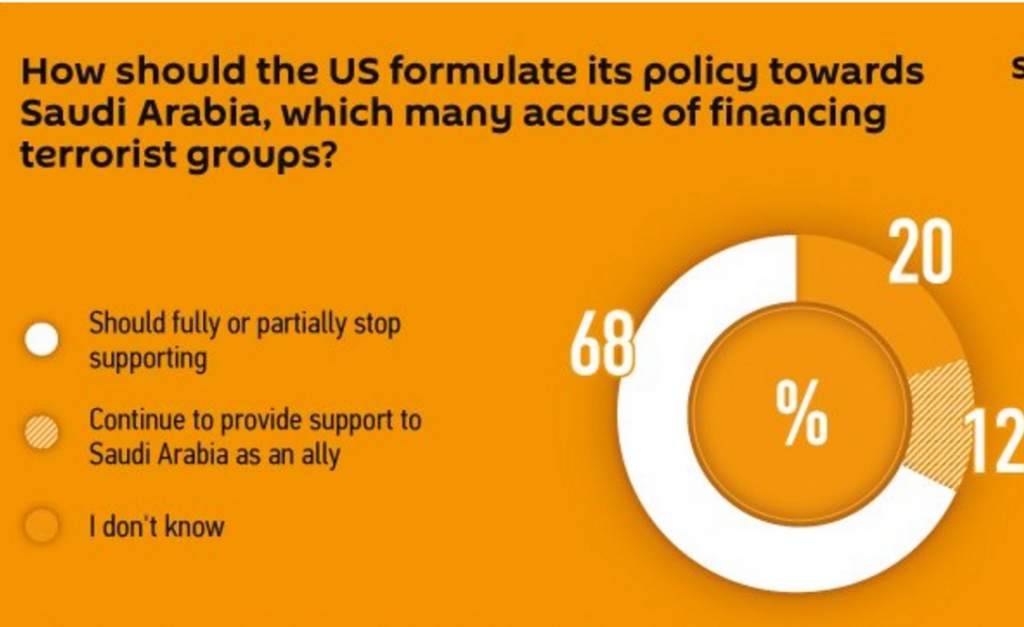 The latest poll by the Sputnik media outlet has revealed that the majority of Americans – 68 percent – believe the US should stop supporting Saudi Arabia until its authorities can prove they don’t finance terrorism.

The survey showed respondents a leaked memo from Hillary Clinton stating that Saudi donors were also the source of funding for Sunni terrorist cells all over the world.

Poll participants voiced their opinion about the future of US policies towards the Saudis.

As many as 68 percent said a strict ‘no’ to full or partial US support of Saudi Arabia.

On Monday, former Pentagon official Michael Maloof told RT there is a reason for ongoing US support of Saudi Arabia, and it is the ‘moderate rebel forces’ in Syria.

“Washington is bowing to Saudi Arabia, because these groups are members of the opposition that the Saudis put up to represent the opposition in Geneva,” he said.

Washington has no control over ‘moderates’ in Syria

US support continues despite widely known Saudi human rights violations in all spheres of life: only a few days ago, activists voiced concern over the fate of a teenager put behind bars for participating in anti-government demonstrations. The boy has been held in prison since 2014, with no charges leveled against him.

Saudi Arabia has also recently been included in the UN ‘blacklist’ of countries violating children’s rights, after data emerged of Saudi-led bombing and ground campaigns in Yemen that have resulted in hundreds of children’s deaths.

The UN subsequently removed the Saudis from the list after they complained. The issue remains under investigation.

The country is also notorious for its backward attitudes towards the internet, technology and women’s rights.

At the beginning of June, Saudi authorities issued a fatwa against siphoning others’ Wi-Fi connections, in line with the Islamic ruling that theft is forbidden.

In May, Saudi authorities issued a law forbidding the country’s women to check their husbands’ cell phones, an offence punishable by jail sentences and flogging.

The US isn’t the only Western state that supports the Saudi regime. Last month, it emerged the UK sends troops to train other countries’ militaries, including Saudi Arabia’s.

The latest poll in the US was conducted by the Sputnik media outlet in collaboration with Populus, a research company, and included some 1,000 respondents aged between 18 and 64. The margin of error is 3.1 percent, so the results are 95 percent accurate.