According to the Syrian president, capturing Aleppo is the last hope of Erdogan’s regime “to implement its Muslim Brotherhood Islamist project”

BEIRUT, June 7. /TASS/. Syria’s northwestern city of Aleppo will become a graveyard for the regime of Turkish President Recep Tayyip Erdogan where his “dreams and hopes will be buried,” Syrian leader Bashar Assad told the country’s parliament on Tuesday.

“When they failed to achieve what they wanted to, an open declaration came up on the support for terrorism and withdrawal from an agreement on halting military actions,” Assad said. “And we saw that when the civilian population and hospitals in Aleppo were attacked.”

“The fascist regime of Erdogan focused its attention on Aleppo as it was crushed in Syria and this is the last hope to implement its Muslim Brotherhood Islamist project,” Assad said. “Aleppo will become a tomb where all dreams and hopes of this butcher will be buried,” the Syrian president said.

All sides should join the peaceful process

Assad has urged all sides involved in the conflict to lay down arms and join the peaceful process.

“I call on all those who hold arms in their hands regardless of the reasons to join the reconciliation process in the country that began several years ago already and was given a new impetus of late,” the Syrian president told lawmakers.

The Syrians have no other choice than to gain victory over terrorism, he said. “Without that victory for us and our children there is no present and no future,” the president said.

But this does not mean that Syria is giving up political processes, he added.

“We continue working in the political area, now there is possibility to achieve success in this direction,” Assad said.

The Syrian leader stressed that “both at the official level and all the Syrian people have a great wish to stop bloodshed for the sake of saving the country.” 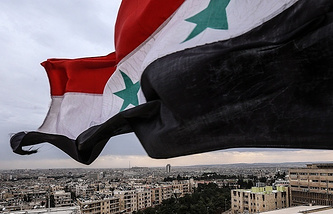 The president thanked Russia, Iran, China and the Lebanese resistance for their support.

“The defeat of terrorism is inevitable as there are such countries like Russia, Iran and China that back the Syrian people and are on the side of truth and those oppressed against the oppressors.”

“I thank them for their firm positions towards us. These states do not give up their principles and traditionally seek to support the right of people to choose their fate independently,” Assad said.

The talks must not violate the constitution

Damascus won’t engage in any talks that are launched in violation of the principles stipulated in the Constitution, Assad said.

“Plans were nurtured for terror to fully seize Syria along with the plans to destroy the foundation of our state – the Constitution – by changing it for a constitution based on the confessional division, which turns the sons of one motherland into enemies and foes,” the Syrian president said.

“We won’t engage in any talks in violation of the principles of the Constitution and we won’t allow the states sponsoring terrorism to push Syria into an abyss and we’ll continue our struggle against terrorism until its full eradication,” Assad said.

According to Assad, “international conflicts have generated regional conflicts, which directly affects the region and, in particular, Syria.”

“The world has become an eye-witness of international conflicts between the countries, which are seeking to keep their sovereignty and independence, and other countries, which are working to implement the interests of third parties even at the expense of their own peoples’ interests,” Assad said.

The Syrian leader also said he was convinced that “the inter-confessional strife in Syria was dead, even though some are trying to waken it up” and terrorist attacks in the country “won’t be able to cause a split among the Syrian people.” Commenting on the talks on the peace settlement in Syria, Assad said these negotiations “have actually not started” while Damascus “has not received an answer” up until now “to the document submitted on the very principles of the negotiation process.”

Assad also said the international community had not expected that the Syrian people would take an active part in the parliamentary elections.

“These parliamentary elections were not ordinary and they were held in severe conditions but the Syrian people has again surprised the world with its unprecedented participation in them and elected its representatives,” Assad said.