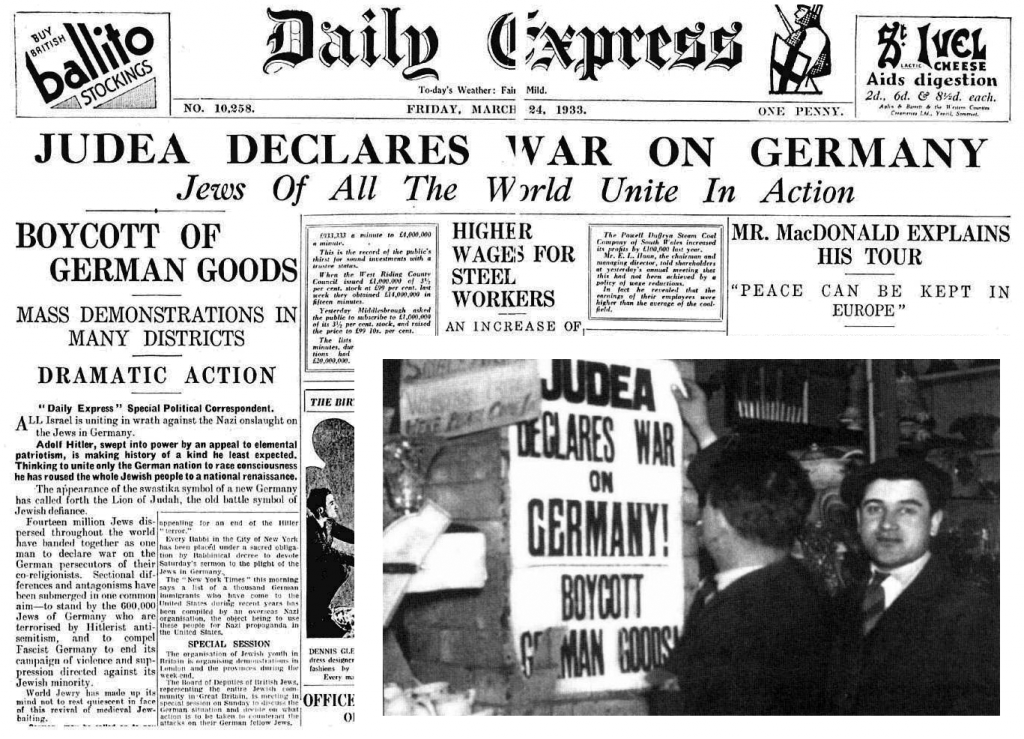 J. K. Rowling and British historian Niall Ferguson, among other figures, signed a letter last October saying that the U.K. needs to build bridges with Israel and not boycott the country. The letter stated in part:

“We will be seeking to inform and encourage dialogue about Israel and the Palestinians in the wider cultural and creative community. While we may not all share the same views on the policies of the Israeli government, we all share a desire for peaceful coexistence.

“Cultural boycotts singling out Israel are divisive and discriminatory, and will not further peace. Open dialogue and interaction promote greater understanding and mutual acceptance, and it is through such understanding and acceptance that movement can be made towards a resolution of the conflict.”[1]

It appears that those people had good intentions. But there are numerous problems with this position. First of all, why didn’t the Zionist world apply the same method in the 1930s? Why did they boycott Germany and even propagandize the claim that “Judea declares war on Germany”? In 1933, the Harvard Crimson specifically declared:

“The role of the neutral nation will be, as always, a difficult one. But those nations sincerely desirous of European peace still have an opportunity to preserve it. An economic boycott of Germany to force its government to terms would so multiply its target as to make a shot impractical.”[2]

Second, J. K. Rowling and Niall Ferguson are not blind. They know that the Palestinians have been mercilessly liquidated, humiliated, beaten, and even tortured by the Israeli regime since 1948. Gaza, as Ron Paul once said, is a concentration camp.[3] So, it is ridiculous for Rowling and Ferguson to ignore these facts and perpetuate the dubious idea that boycotting Israel is not realistic. 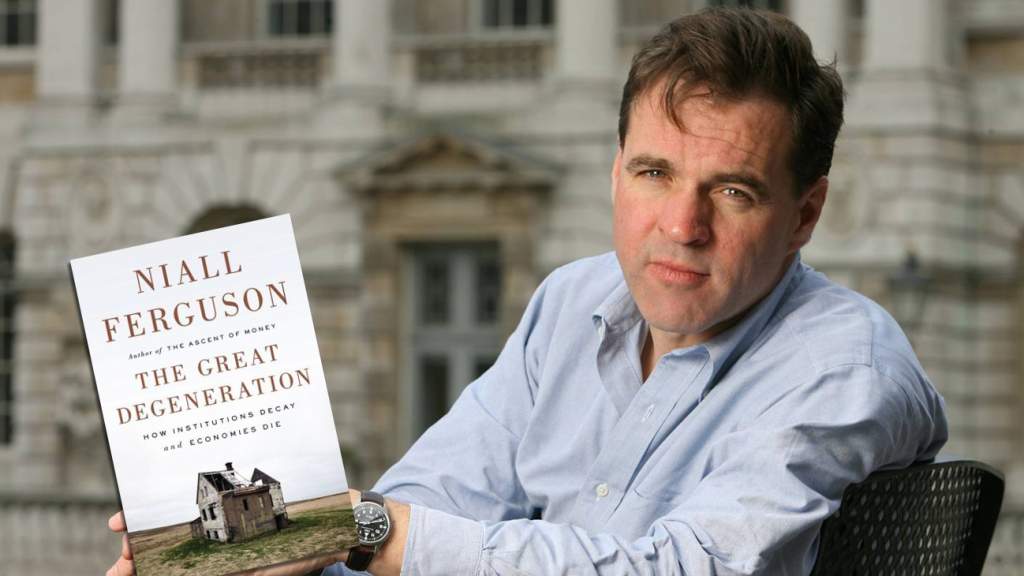 Ferguson is a widely-read historian, and he should call fellow historians such as Israeli scholars Benny Morris and Ilan Pappe to get their assessment on some of these issues. To repeat the words of Morris:

Morris expanded on these issues in scholarly studies which are published by Cambridge and Yale.[5]

Third, Ferguson, who is the Laurence A. Tisch Professor of History at Harvard University, wrote an entire article in the Daily Beast back in 2012 saying that both the U.S. and Israel needed to bomb Iran.[6] The Harvard professor didn’t ask for “peaceful coexistence” or mutual understanding between Iran and the West. He didn’t even ask the West to promote mutual dialogue with Iranian officials at all. He asked for another war. He asked for another disaster. He asked for another bloodshed. Now he is asking for “mutual acceptance”?

As it turns out, Ferguson is another representative for the powers that be.[7] He declared in the Boston Globe:

“I am a philo-Semite…I am also an anti-anti-Semite. The murder and mayhem perpetrated by anti-Semites throughout history, above all in the 20th century, deserves its special place in the annals of infamy.”[8]

Ferguson never defines what he means by anti-anti-Semite because no one has been able to articulate this promiscuous idea in a logical or rational way. Is Jewish scholar Norman Finkelstein, whose siblings died in Nazi Germany, an anti-Semite for criticizing Israel?

Well, according to the prevailing wisdom, he is. This was one reason why Israeli officials did not allow him to come to Israel. Is Jesus Christ an anti-Semite, despite the fact that he was an ethnic Jew? Abraham Foxman, former director of the Anti-Defamation League, would say yes.[9] Are Christ’s disciples anti-Semites? Organized Jewry would again answer in the affirmative. Heinrich Graetz, the father of modern Jewish historiography, charged that Christians’ “hatred against Jews” was “derived from the gospels and their theological literature.”[10] We all know by now that the anti-Semitism card is a trick:

So, if we follow these ideas to their logical conclusions, Ferguson is an anti-Christ precisely because organized Jewry has already dubbed Christ an anti-Semite. Perhaps this is one reason why he has spent much of his career spreading the political ideology of that system. Ferguson fully supported the invasion of Iraq back in 2003. He wrote then:

“It’s all very well for us to sit here in the West with our high incomes and cushy lives, and say it’s immoral to violate the sovereignty of another state. But if the effect of that is to bring people in that country economic and political freedom, to raise their standard of living, to increase their life expectancy, then don’t rule it out.”[11]

Can Ferguson really look an Iraqi in the eye and tell him or her that the war actually brought any of those lofty promises to fruition? Has he picked up the newspaper lately to see what is actually happening in the region? The International Business Times reported last year: “ISIS Has $1B Worth Of US Humvee Armored Vehicles; One Was Used In Monday’s Suicide Bombing Near Baghdad.”[12]

What could America do with one billion dollars? Is this the freedom that Ferguson is talking about? Is this man really submitting his appetite to practical reason?

[4] Ari Shavit, “Survival of the Fittest?: An Interview with Benny Morris,” Counter Punch, January 16, 2004. I always get into trouble for things that I discovered. I first got into trouble when I presented Morris’ assessment to a Zionist friend of mine about two years ago. Instead of wrestling with Morris’ own judgment, which he documents from sources in the Israeli archives, my good friend instantly called me an anti-Semite. “Wait a minute,” I said, “Let’s talk about what Morris said and ignore Jonas E. Alexis’ opinion. Can we do that?” He didn’t want to focus his attention on the real issue at all. Obviously I was the problem because I cited Morris.  As the saying goes, if you don’t like the message, then shoot the messenger.

This incident actually supported my prevailing belief that there are some people in this world who will never be convinced by facts, logic, and consistency at all. In fact, they will hate you for deconstructing their cherished ideology. If your overriding principle in life is to pursue the truth and uphold practical reason wherever they are found, then you are going to lose some friends and isolate people. Here is a similar example. The Israel National News has recently reported:

“Jews are the most libertine religious group in America according to a new Gallup poll, and are more likely even than people with no religion to find same-sex relations and abortion to be morally acceptable. As a group, American Jews have long leaned towards the Democratic Party, a tendency which has persisted despite rising average incomes.

“Milton Himmelfarb, a sociologist who specialized in American Jewry, once remarked that ‘Jews earn like Episcopalians, but vote like Puerto Ricans.’ While Americans as a whole voted for Barack Obama over John McCain in 2008 by a margin of 53% to 46%, Jews split even harder for the Democratic candidate, with 77% supporting Obama compared to just 22% for his Republican challenger. In 2012 those numbers changed only slightly, with Jews breaking 69% to 30% in favor of Obama, compared to 51% to 47% among Americans as a whole.

“A whopping 76% of American Jews said they felt abortion was “morally acceptable,” compared to just 38% of Catholics, 33% of Protestants, and 18% of Mormons. Only respondents who selected “no religion” tracked closely with Jews, with 73% saying they found abortion acceptable.

“While views on homosexual relationships have shifted in the United States, American Jews were again far more likely than others to find them morally acceptable, with 85% of Jews and 83% of those with no religion accepting of gay or lesbian relations.” “American Jews strongest backers of gay marriage, abortion,” Israel National News, May 30, 2016.

The problem is that Mark Dankof, E. Michael Jones and others have said the same thing. But the Daily Beast wrote an entire article saying that Dankof is an anti-Semite.

[6] The article seemed to have been an embarrassment to the Daily Beast, and they have deleted it from their archives.

[12] Angelo Young, “ISIS Has $1B Worth Of US Humvee Armored Vehicles; One Was Used In Monday’s Suicide Bombing Near Baghdad,” International Business Times, June 1, 2015.