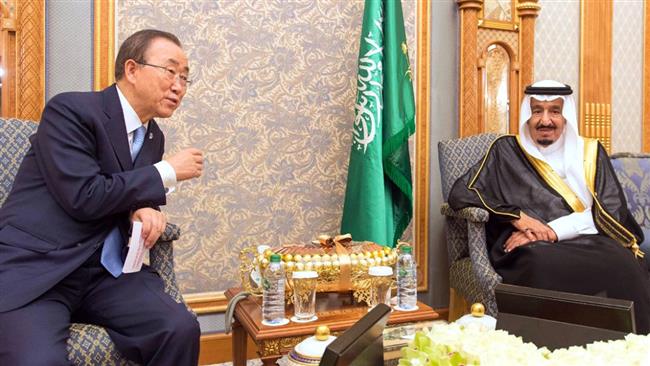 [ Editor’s Note: The thin veil has now been dropped by the Saudis. The Royals are demanding a UN understanding that they can purchase immunity from any UN determinations on their actions, including their horrendous record of bombing hospitals and civilian targets in Yemen. And of course, not a word will be mentioned of their support for terrorism via their proxies in Syria and Iraq.

That said, I must add that the Yemeni rebels, as the Jihadis have also been doing throughout the current wars, are locating their operational commands and critical supply depots in these facilities so that if they are bombed they can at least get the propaganda slaughter PR out of the loss.

This is what Gordon so often calls, “Welcome to how the world really works.”

I think the threat of the fatwa is just wonderful… if the world counters with its own fatwa of isolating the fatwa jihadis with their own medicine, isolation. They should be given a list of demands that must be met, like banning their religious extremists and ending state funding for them, paying reparations for their damages, and closing down all the Wahhabi terrorist-funded mosques in the world.

This will be an interesting showdown, as all those influence peddlers who are not on the Saudi payroll will rush to try to get onboard the gravy train, trying to protect the Saudi’s right to kill kids in Yemen. American “exceptionalism”, and the Western version also, will be on public display.

It is not that we don’t already know what a fraud the exceptionalist claims are, but that it is such great fun to have them so shamefully exposed. The fix, of course, is to diversify oil and gas supplies, so that the gulf sources are not the engine for corruption and extremism they have become.

I understand that the corruption will be just as bad almost anywhere else for resource extraction. It is just that spreading it out more makes it easier to control…  Jim W. Dean ]

Saudi Arabia and its allies have threatened to cut off funding to UN programs if United Nations chief Ban Ki-moon doesn’t drop the kingdom from a blacklist of violators of children rights, diplomatic sources say.

Speaking on condition of anonymity, the sources said Tuesday that Ban’s office was bombarded with calls from the foreign ministers of the Persian Gulf littoral states, as well as ministers from the Organization of Islamic Cooperation (OIC), after the blacklisting was announced last week.

On Monday, the UN temporarily removed the Saudi kingdom from the blacklist of states and armed groups that openly flout the rights of children, pending a review. But Saudi envoy to the UN said the removal was “irreversible and unconditional.”

One UN official said Saudi Arabia is organizing a “full-court press” over the blacklisting.

“Bullying, threats, pressure,” an anonymous diplomatic source told Reuters on the nature of the contacts, adding that it was “real blackmail.”

The source said that Saudi clerics have also threatened to issue a fatwa (religious decree) “against the UN, declaring it anti-Muslim, which would mean no contacts of OIC members, no relations, contributions, support, to any UN projects, programs.”

The UN had added Riyadh and the coalition of countries supporting it in its war on Yemen to the blacklist for being responsible for 60 percent of child casualties in the Arab country last year, when it killed 510 children and injured 667 others.

Riyadh, angered by the report, demanded its “correction” and on Monday UN Secretary General Ban Ki-moon agreed to the kingdom’s proposal to jointly review the report.

“Pending the conclusions of the joint review, the secretary-general removes the listing of the coalition in the report’s annex,” Dujarric said.

Human Rights Watch criticized the UN move to remove Saudi Arabia from the blacklist and said the UN chief had capitulated to Saudi pressure, highlighting that the UN itself had extensively documented the Saudi airstrikes on Yemeni schools and hospitals.

Amnesty International decried the “blatant pandering,” which it said “damages the credibility of the UN as a whole”.

“It is unprecedented for the UN to bow to pressure to alter its own published report on children in armed conflict. It is unconscionable that this pressure was brought to bear by one of the very states listed in the report.”

“This is a stark example of why the UN needs to stand up for human rights and its own principles – otherwise it will rapidly become part of the problem rather than the solution,” said Amnesty.

The British charity group Oxfam said the world body’s decision to retract its findings was “a moral failure.”

Saudi Arabia launched its military aggression against Yemen on March 26, 2015, in a bid to reinstate resigned president Abd Rabbuh Mansur Hadi, a staunch ally of Riyadh, and undermine the Houthi Ansarullah movement.

Riyadh has been backed by Egypt, Morocco, Jordan, the United Arab Emirates, Sudan, Kuwait, Qatar and Bahrain in the military campaign. More than 9,400 people have been killed and at least 16,000 others injured in the aggression.