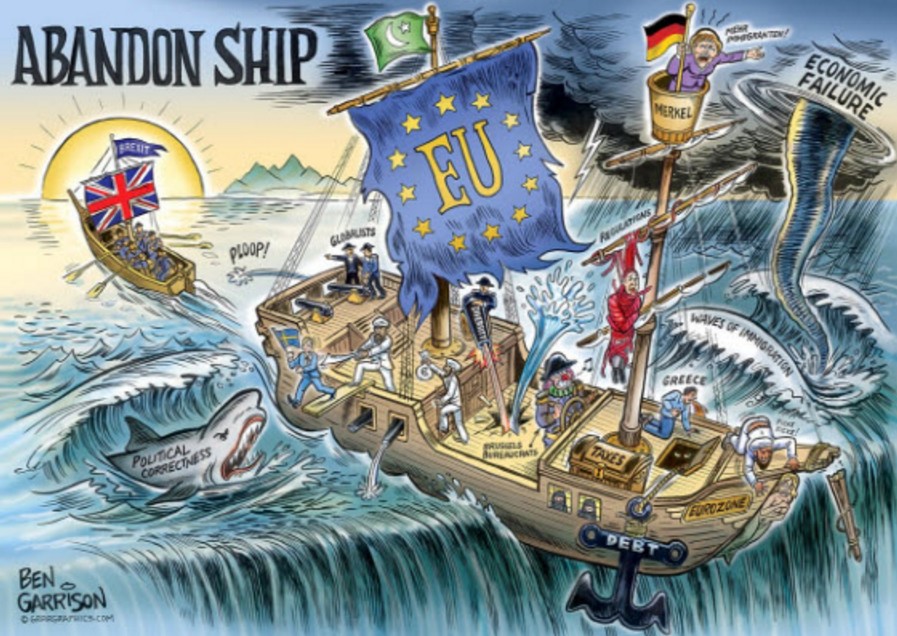 It’s happening, as I predicted it would, reluctant though I am, as always, to blow my own trumpet. Most polls now show a significant lead for leaving the EU. The political establishment are in such a funk they’ve even had police in Caerphilly in South Wales (famous for its cheese) moving on Leave campaigners, whilst leaving the Remain activists in place.

Let me repeat that, in case it didn’t sink in first time: the police are now so desperate to keep Britain in the German orbit they are interfering in the referendum campaign, misusing police powers so as to frustrate Leave campaigners. There are anecdotal reports, probably true, from the 1975 EEC referendum campaign of police cars depositing ballot boxes in disused aircraft hangars.

The ‘No’ side won that referendum, but were deprived of victory by the German agent Philip Allen, who was rewarded with a peerage. Probably the second most important Abwehr agent inside the War Cabinet secretariat during World War II, after Sir Edward Bridges, Allen was a notorious civil servant. More than any other German agent in Whitehall he undermined public support for capital punishment through his cynical maneuvers to get young Derek Bentley and Ruth Ellis hanged.

Both Bentley and Ellis were guilty of murder, although there is some doubt in Bentley’s case, but neither deserved to be hanged. Bentley took the less serious role in the murder of a police constable, who was only doing his duty, to his accomplice, Craig. Since Craig was too young to be hanged, Bentley should have been reprieved.

Ruth Ellis’s victim was a brute of a man, who could not have been heard to complain too loudly about being shot, although he probably did. No Englishman could be expected to have much sympathy with a man who had lifted his hand to a woman.

Allen’s modus operandi was absurdly simple. The pro-German Wilson government arranged for regional counting of the votes, which Allen was in charge of counting. He simply substituted his own numbers for the actual votes. Harold Wilson of course had worked hard for a German victory in World War II, trying to get as many Allied sailors drowned and ships sunk as he could. I only saw him up close once, towards the end of his long and worthless life. He was a wreck of a man. Tragically, neither Philip Allen nor Harold Wilson was hanged for treason in World War II, a huge counter-intelligence failure by MI5.

Local counting officers were too stupid to do the sums themselves. In a desperate effort to shut down the debate over British membership of the EEC Allen went so far in rigging the result as to show a 2:1 majority in favour of staying in the EEC. As now, journalists were credulous and ill-informed. It was the simplest thing in the world for Allen to pull the wool over their eyes.

The BBC probably knew what was happening, but they wanted Britain to remain under Germany’s thumb, just as the Corporation secretly backed Hitler’s Germany in World War II, subtly altering its output to push the Jerry point of view, whilst pretending to be neutral.

The polls vary, as usual, but broadly speaking the online polls, which are more accurate, are showing a 5-10% lead for the pro-British (Leave) side amongst those intending to vote. You can pretty much ignore the telephone polls. You’d be better off asking around the local pub.

There are, however, three main problems with the polls:

(1)  We don’t know if the pollsters are checking whether the people they are polling are actually eligible to vote – thanks to large-scale labour dumping there are a large number of Europeans in the UK.

(2)   The polling companies have not adjusted their methods, despite failing to predict last year’s Conservative win in the General Election and

(3)   There are serious doubts about the objectivity of the polling companies on the EU question and the media organisations who commission the polls.

In my experience the best polling company in the UK is ICM, but even they are not that good. Canvass returns appear to be suggesting a large pro-Brexit swing.

Assuming there is no repeat of the shameful exercise in vote-rigging in 1975, I predict a win for the pro-British side, with the pro-German side trailing by somewhere between 10 and 20 points.

What Happens After the Referendum?

The UK has two routes to denunciation of the Treaty on European Union (TEU): under the TEU itself (Article 50) or the Vienna Convention on Treaty Law (VCTL). Various articles in VCTL could be used, with differing notice periods.

Technically, the UK isn’t bound by the TEU at all. That is because our two signatories to the Treaty of Brussels, under which we acceded to the EEC, Edward Heath and Sir Geoffrey Rippon QC, were both German (DVD) agents. Under international treaty law, where one country corrupts the signatories or another, that state is not bound.

The TEU notice period is 2 years. During that time alternative trade arrangements can be made, but given the massive trade deficit with the EU, which could be as much as £75 billion this year, even after allowing for a small surplus in services, the UK neither needs nor wants tariff-free access to EU markets.

Don’t forget that the government exaggerates the importance of the EU as an export market by counting all exports via the giant container ports of Rotterdam and Antwerp as exports to the Netherlands or Belgium. They also calculate EU exports by a different method, using VAT returns, again with a view to pretending that the EU is a more valuable market than it really is.

I favour a clean break, giving say 12 months’ notice under VCLT, which could also be used as a transitional period. Twelve months would be ample time for European workers in this country to pack up their bags and leave.  Some of them will be missed, but most will not.

Immigration, of course, has been a huge issue in the campaign. Economically illiterate journalists, if that is not a tautology, and the government keep saying that the key issue is the economy, as though the two were not linked. The massive, £75 billion a year cost of EU labour substitution has a big economic impact, driving up welfare costs and the deficit, and that figure does not include the multi-billion pound impact on the National Health Service of several million unwanted semi-skilled and unskilled Europeans.

The IMF and NATO

BREXIT will have implications for those international organisations which unwisely chose to campaign for the Remain side, in particular the IMF and NATO. Each is now likely to have to accept the political consequences of their side losing.

UK membership of both is now seriously in question. The IMF is hated, whilst NATO is increasingly seen as pointless, with a dangerous obsession with Russia.

News of this broke in England after I had written the above. My sympathies to the families and friends of the victims. Being gay myself I feel particular fellowship with the victims of course. Looks like Islamic terrorism, but too early to call. The Orlando mass shooting will be the subject of next week’s column. I hope security is being beefed up at gay venues across the States – I doubt this will prove to be an isolated attack, indeed there are already reports of an arrest in LA.