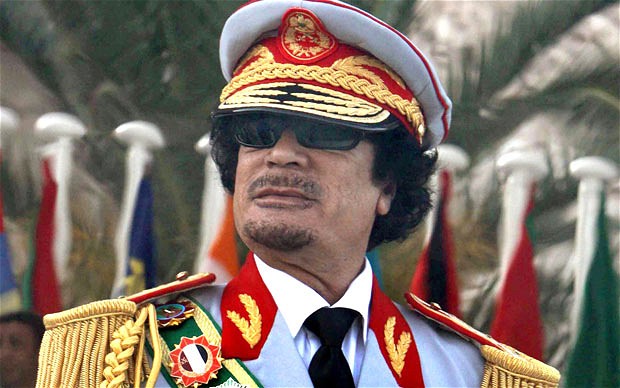 [ Editor’s Note: One of the lessons in life that those in high positions have learned to survive major upheavals is the art of “knowing when to leave town”. Unfortunately for these former Gaddafi people jail time must have dulled their senses.

To have remained in Tripoli, the heart of the hard core Libyan extremist country was a form of suicide. I would have headed for the border pronto, but it is too late for them now.

Tribal revenge is hardwired into Libyan society. They must have known that. The UN as usual in these cases, gets up on their high horse and demands that the killers be found and punished in a country now run by armed gangs. These folks are brothers from another planet, like they get high from making nonsensical pronouncements which ignore the reality of the situation.

In a rare presidential admission Obama spoke about how he wishes he had given more thought about what would happen in a post Gaddafi Libya with all the various tribal factions armed to the teeth and competing for power and control over the oil resources. 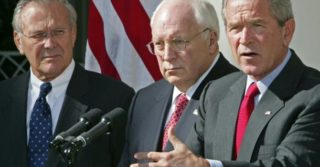 It was a legacy statement, designed to not try to defend the undefendable, like Bush (43) and his Cheney-Rumsfeld cabal have done…their position of having no regrets about anything they did while in office. We live in a world now where political denial of the most obvious disasters is the norm.

Maybe the Libyans have resorted to justice from the barrel of a gun because they know that is the only option they have any control over. This is the anarchy that emerges when people have no faith in public institutions and resort to gang warfare on the large and destructive scale we are seeing in so many places.

The biggest news of this story is surprisingly in the last line, what we call in the trade an upside down story. “Last Friday, military forces allied with the GNA (the new unity government) managed to retake Daesh’s main stronghold in Libya, namely the northern port city of Sirte, from the terrorist group.” Color me completely surprised by that. (Update: Once again the “retaking” reports are premature. The battle is ongoing) ... Jim W. Dean ]

Twelve former officials with the deposed regime of Libyan dictator Muammar Gaddafi, who were recently freed from prison, have been found dead in the Libyan capital.

The Libyan prosecutor’s office said in a statement on its Facebook page on Sunday that the bullet-punctured bodies of the 12 former government officials — who have not been identified — were found in Tripoli on Friday. It further said authorities have launched an investigation into the murders.

Seddiq es-Sour, of the prosecutor’s office, told Libyan television that the corpses were found in different parts of Tripoli and confirmed that all of them were ex-prisoners who had been arrested between 2011 and 2014.

Es-Sour said earlier this month that the Supreme Court had ordered the release of six officials from the former regime of Gaddafi pending an appeal “for reasons linked to their health and age.” It was not clear if the six officials es-Sour talked about back then were among the 12 individuals who have now been killed.

The killings occurred a day after a court ordered the release of the officials on the condition that they report to the prosecutor twice a month.

They had been imprisoned over atrocities they committed during a 2011 uprising that, coupled with NATO military intervention, led to the fall of Gaddafi and his regime. The former dictator was himself later captured and brutally killed by armed rebels in the country.

Martin Kobler, the United Nations (UN)’s special representative and head of the UN Support Mission in Libya (UNSMIL), denounced the killings and urged a rapid and “transparent” investigation. Kobler said on his Twitter account that he was “shocked and dismayed by the reports of murder of so many detainees released by a Tripoli court.”

Also reacting to the news, Libya’s Government of National Accord (GNA) decried the “despicable crime,” calling on security and judiciary authorities to hold accountable those responsible for the murders, according to the GNA’s statement on its Facebook page.

Tens of people are on trial in Libya for their participation in the violent repression of the 2011 uprising, including two sons of Gaddafi and his officials.

Libya has been grappling with violence and political uncertainty since the strongman was deposed. Armed groups and regional factions have been fighting for power ever since.

Exploiting the chaos, the Daesh terrorist group, which had previously been mainly operating in Syria and Iraq, emerged in Libya in February last year. Last Friday, military forces allied with the GNA managed to retake Daesh’s main stronghold in Libya, namely the northern port city of Sirte, from the terrorist group.