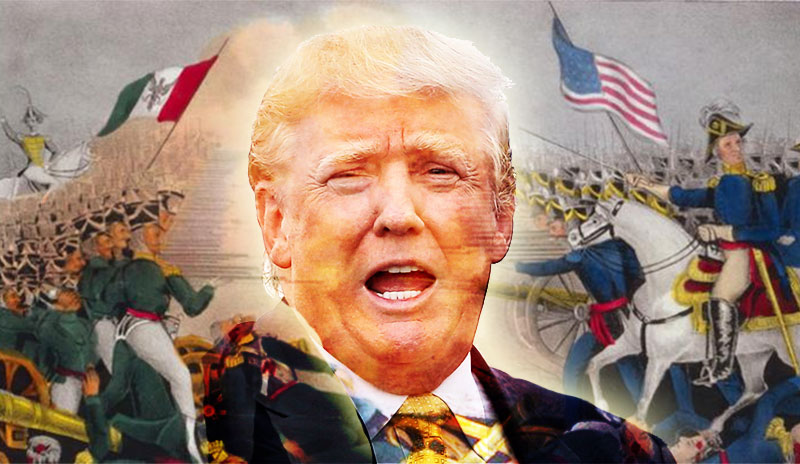 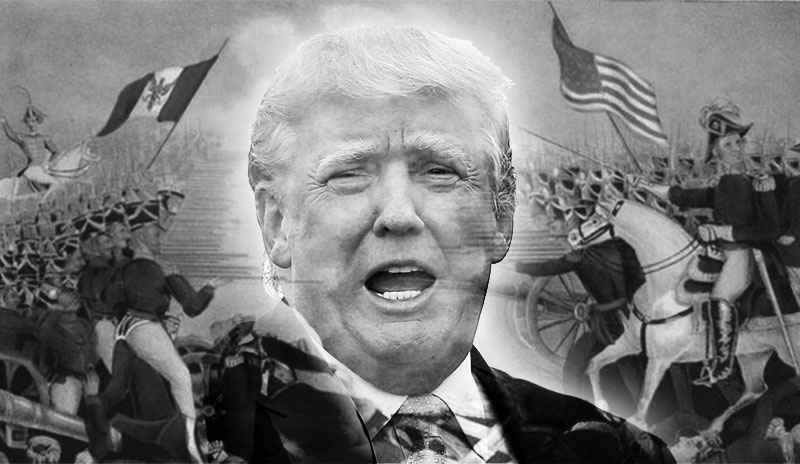 The last time the USA invaded Mexico was over 167 years ago. It was called “Mr. Polk’s War” after the ardent Manifest Destiny U.S. President James Polk.  It was also more commonly known in the US history books as the Mexican-American War of 1846-1848; a forgotten war that saw the USA invade Mexico via a FALSE FLAG claiming Mexicans shot at US Troops over the boarder thus ramping up support to attack and invade to meet Manifest Destiny goals.

The outcome of the war brought USA massive territory of Texas and the west.  But all was NOT well.

Many, like Congressman and future U.S. President Abraham Lincoln who through the Spot Resolutions exposed President Polk’s False Flag and condemned saying “the war was unnecessarily and unconstitutionally begun by the President of the United States”.

So unpopular was the war that Zachary Taylor was elected U.S President followed later by one its greatest critics and arguably America’s greatest President Abraham Lincoln.  President Polk is largely forgotten and most US citizens cannot even name him as a President.

Trumps demagoguery on Mexico is well documented and proudly out in the open.  Trump is very clear.  Back in 2015, he said “US Should Have Invaded Mexico Instead of Iraq”

And everyone knows the famous “We will build a beautiful wall and Mexico will pay for it” statements that he has made on many very public and media broadcasted occasions.

Part of the Trump strategy to deflect personal responsibility from the USA and its internal ills is to confiscate the working mans earned wages as they wire them back to family in Mexico and use that money to pay for the wall.  This strategy was concocted by Trump after current Mexican president Pena Nieto said “We won’t pay for his wall” and former Mexican president and coca-cola executive Vincent Fox said “We won’t pay for that fu$king wall”.

But we all know those wages wont’ be able to fund the billions up billions needed to pay for the Trump Wall; let alone pay for up to 60 billion it will cost to implement a deportation plan for the 10 to 15 million undocumented workers that he said he will get rid of.  Trump has never made it clear regarding the complicated fact that if he deports the millions of undocumented workers then from who will confiscate money from?  But then again, Trump does NOT have to make cents to get into a position of power to implement his unilateral plans; at least his Trumpsters don’t think so.

So if he wont’ get enough confiscated money from workers that won’t be in the USA anymore and Mexico wont’ pay for the wall, then what is the next logical step?

The USA has a long history of such things in Latin America so it’s not beyond the pale.

In fact, Mexico has a ton of resources from oil to mining of minerals not to mention a country that builds automobiles and is the 4th largest exporter of cars around the world. Did I mention the the lovely senoritas too?  You know Trump loves that right?  I mean once Melania sags a bit, he can find a Mexican hottie in Cancun or Puerto Vallarta right up his trophy wife alley.  Of course, he will sign her citizenship papers immediately citing national security or something like that and boom, Trump can own Mexico right?

Or is a bit more complicated than that?

Mexico is currently the USA’s 2nd largest trading partner. Putting that economic relationship in jeopardy would be foolish because it would take away resources from the USA to deal with its own internal economic challenges and international challenges around the world that depend on a stable economic relationship with Mexico as one of its foundation pillars that enable its hegemony.

Moreover, who said Mexicans will lay down for Trump.  Does the USA really want to engage the 120 million Mexicans who are fiercely proud of their modern country?  Wait, it gets worse and I mean really bad……

Think about it.  We have Trump yelling about ISIS in America and that we need to defend ourselves because there may be a few cells somewhere in the USA.  I mean, that is the card he plays.

So he’s telling us about ISIS while he wants to attack our largest neighbor while there is a potential of 85 million INSURGENTS sitting right now in the USA, working at factories, restaurants and more?  Really?  Is that a good idea?

I mean, we have a history of putting citizens in jail while we attack their former countries right?  We did it to the Italians and Japanese Americans during World War II and have since apologized for such ugly action.

But how many people was that? 85 million?  No!  It was about 120,000 Japanese Americans who were sent to just 10 camps around the USA.  And far far less in numbers for Italian Americans.

Now, how the heck is Trump going to create camps for 85 million insurgents?  That’s about 25% of the total USA population. Does that sound right to you?

So here we all are listening to Trump whilst he rambles on about Mexico feeding a frenzy of frustrated voters who still cannot figure out that the global banksters ripped them off and not the guy making $ 2 an hour under the table.  This is beyond a show. It’s irresponsible at the highest level.

Worse, if he gets to the oval office, it won’t even get that far.  The US Military knows dam well that attacking and invading Mexico is complete lunacy and will destabilize the US foreign policy around the world while China and Russia jockey for global positioning unencumbered by the stupidity of what Trump is aiming for.

Now there are some bright lights turning on within Wall street.  The talk on the street is that a Trump presidency will cause the Mexican Peso to devalue.  In other words, the smart money will make money shorting the Mexican pesos.

In fact, Bloomberg was first to report that traders are ready to pull the trigger on shorting the peso if Trump gets close to winning.  A drop in the peso will cause Mexico short term stress and will cause them to react badly as their economy is intertwined with the USA.  So this is quite serious and will have very bad consequences for all.

And finally, can I throw in one more thing?

Whilst Trump has been yelling about Mexico, China has fully entered the consumer market of Mexico bringing in all their stuff to sell.  They have already invaded economically from top to bottom.  Now, to be fair, the USA based global companies are in Mexico too…..so lets put them on the list;

What I mean is there are billions invested in Mexico by western globally companies that stand to lose billions in profits if Trump invades.  Do you think they will take that lightly?

Look no one in the sensible world wants to invade Mexico. It makes no cents.  But yet, there is Trump. And he makes no cents.  And do you know what happens to US Presidents that make no cents?   If Trump does NOT fall in line with the global reality, he will get punked by the elite powers.  It is that simple folks.

Wouldn’t it just make more cents to apologize to the working men and women of the USA and Mexico because we all looked the other way when things were good pre-2008 bankster robbery?  I mean, come on folks, you’re guilty like all of us.  You knew the guy cleaning your table at your favorite restaurant was undocumented.  His employer knew too. We all knew but since we were all on top of the world, it mattered not.  But now, after the robbery from Wall Street, all of sudden it matters?  Come on!  That’s bullshit and you know it.

So cut the crap and give the working man full 100% rights to work via permits and a clear path to citizenship.  It’s wrong to condemn a hard working man.  Period and you know it!

So do the right thing!  Forget invading and let’s fix ourselves first.

I welcome your thoughts, comments and encourage intelligent responsible discourse.