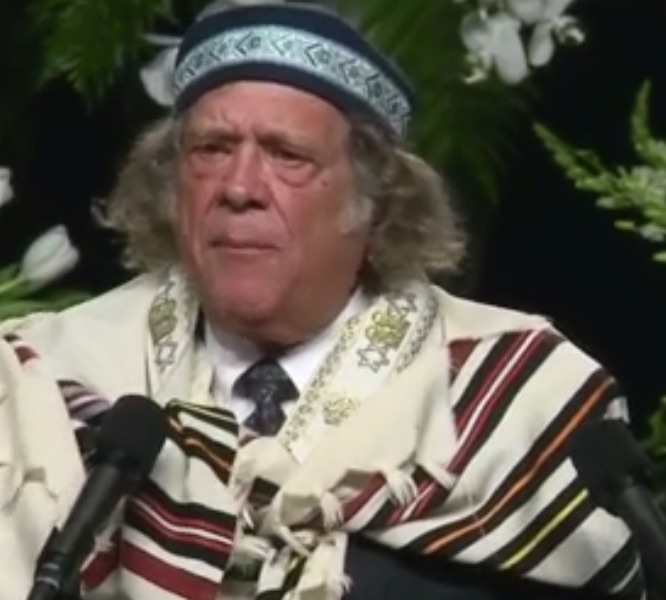 I met Rabbi Michael Lerner twice in 2012. The rabbi kindly invited me into his home, we dined together, I met with members of his congregation and discussed my thoughts with them. However, I was recently troubled by Rabbi Lerner’s speech at Muhammad Ali’s funeral. Unlike many other peace loving people I was not impressed at all.

“I came here as a representative of American Jews,” Rabbi Lerner announced to his audience at Muhammad Ali’s funeral. And I wonder if the Rabbi is indeed the representative of the Jews, how come he grossly misrepresents the beliefs of 90% of Jewish Americans? The answer? Rabbi Lerner doesn’t represent any Jews, not even the 15 members of his congregation. Rabbi Lerner misrepresented the nature of Judaism, Jews and Jewishness. He was on a mission to give the ‘J word’ a good plug.

“American Jews played an important role with African-American struggles,” the Rabbi insisted. This is certainly the case but, of course, Jews also played an important role in the African slave trade. The Rabbi missed a great opportunity to express sincere regret about that unfortunate fact.  And when the Rabbi said: “we today stand in solidarity with the Islamic community in the country and all around the world,” he was simply insincere. The truth is to the contrary. Leading Jewish American institutions and lobbies have been at the forefront of advocacy of the war against Arabs, Muslims and Islam.

The Rabbi claims that as a Jew he realises that “God has created everyone in God’s image and that everyone is equally precious.” Seemingly the Rabbi is confused. The religion Lerner describes is not Judaism that is tribal, exclusive and exceptionalist but Christianity that is universal and inclusive. In Judaism, Jews are chosen (what ever that means). The followers of the Judaic religion have invented a God who chooses them over all other people. This fact may explain why Rabbi Lerner doesn’t support a universal right of return in Palestine. His offering to the Palestinians is very limited. He effectively denies the Palestinian cause.

You can hear what Rabbi Lerner really thinks about Islam, Muslims Arabs Palestinians and the primacy of Jewish suffering (in particular from 17.20 m/s):

Rabbi Lerner is telling us. “It’s up to us to continue that ability to speak truth to power. We must speak out, refuse to follow a path of conformity…” I totally agree with that sentiment. But then he continues, “tell the 1% who own 80% of the wealth of this country that it’s time to share that wealth.” Maybe Rabbi Lerner has a better chance than most in negotiating with the Jews who dominate the demography of the notorious ‘1%’. I somehow have a feeling that Rabbi Lerner may have a slighter better chance to gain an audience with George Soros, Sheldon Adelson, Ronald Lauder or Haim Saban than anyone within Ali’s extended family.

“Tell the politicians who use violence worldwide and then preach nonviolence to the oppressed that it’s time for them to end their drone warfare and every other kind of warfare.” Again considering that the neocon philosophy is a Jewish Zionist project and Israel is the leading drone manufacturer maybe Rabbi Lerner should preach to his people rather than to the Ali family.

“Tell judges to let out of prison the many African-Americans swept up by racist police and imprisoned by racist judges.” I am perplexed. I will allow myself to be a bit cynical here — If I understand correctly, the American Supreme Court is now 3/8 Jewish. Maybe Rabbi Lerner can just sort out this issue with his own people, discussing these crucial matters in Yiddish or maybe even Hebrew.

Rabbi Lerner announced to the assembled Goyim at Ali’s funeral, “tell Israeli prime minister Netanyahu that the way to get security for Israel is to stop the occupation of the West Bank and help create a Palestinian State.” Dear Rabbi, Israel is the Jewish State, you are a rabbi. Shouldn’t you tell Netanyahu?

American Jewish oligarchs are dominating the American election. Hence, it is not surprising that the Rabbinical sector ‘knows’ the 2017 presidential results six months ahead of the American people.  Rabbi Lerner seems to know who the next American president is.   “Tell the next president of the United states that she should…”  Rabbi, considering that Haim Saban is the biggest donor to the Democratic Party, there is no reason to shout politics at Ali’s funeral. All you have to do is to call Haim and help him repair the world in accordance with your ‘Tikun’ philosophy.

“We could start with a global and domestic plan, once and for all end global and domestic poverty, — homelessness, hunger, inadequate education, inadequate health care.” I agree with the Rabbi, we can. But that move towards social justice and production involves complete opposition to the hard capitalism that was installed in our midst by the likes of Rothschild, Goldman Sachs, Soros, Greenspan, Milton Friedman, Larry Summers etc.

I guess that the Rabbi knows it all. But if the Rabbi wants Tikun Olam (to amend the universe in Hebrew), maybe he should start with his own people, whom he claims to represent, rather than spinning to Muhammad Ali’s family and the rest of the nation.