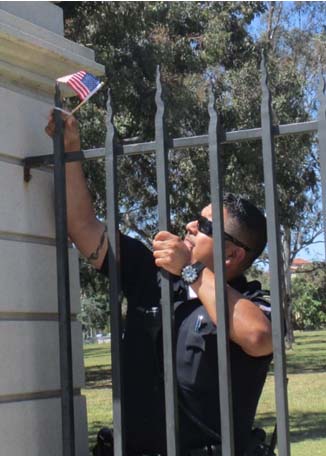 As a law-abiding 74-year American citizen, I have never been put in handcuffs until yesterday and it was carried out under your orders and done illegally and forcefully on your behalf by a bullying coward — VA policeman M. Perez (Badge #2140). He is unworthy of any rank or merit.

Prior to your new assignment at the Los Angeles VA just a few months ago, you were employed in Chicago, our nation’s most crime-ridden city where murder, violence and mayhem are a way of life.

This is West Los Angeles, a peaceful civilized area, aside from the white-collar crime that runs rampant at the most corrupt VA in nation carrying out the biggest land-fraud swindle in American history that leaves thousands upon thousands of disabled Veterans homeless and hungry at skid row and back-alley squalor.

For more than eight years, the Old Veterans Guard has always maintained peaceful and non-violent Sunday Rallies carrying out our mission to bring an end to the widespread mismanagement, malfeasance and misappropriation of Veterans property at the Los Angeles VA and to stop the abuse and inhumane treatment of our fellow Veterans who are disabled, disadvantaged and homeless. Now, you’ve brought your Chicago mob-boss mentality of gangsterism and thuggish police misconduct to West Los Angeles and it’s time to bring it to an end.

Last week under your unilateral directions, the main entryway to the VA Wadsworth Hospital was aligned with gay pride banners. After Sunday morning’s massacre in Orlando, you tried to shield and deflect possible repercussions of the VA’s banner display by sending four VA police vehicles with armed VA police officers to the front open-gate of the Veterans National Park to illegally block us from our weekly Sunday Rally and posting of the American Flag.

VA police officer Davis was barking orders that we can’t put anything on VA property because of what happened in Orlando, which he said forced the VA to remove its own gay pride banner display.

I reminded him that the American Flag is not “anything,” but is “a living thing” while he tried desperately to equate Old Glory to your gay pride banners, which is consistent with your unilateral and out-of-control VA leadership.

Yesterday was our 433rd consecutive Sunday Rally to “Save Our Veterans Land” and to “Bring Our Homeless Veterans HOME.”

Per usual, I was preparing to legally post my American Flag in honor of and in tribute to the brave men and women who have defended our Nation’s Colors for more than 2 ½ centuries, when officer Davis illegally grabbed and confiscated it before I could legally and proudly display It.

Then Ted Hayes, aka “Mr. Patriot,” prepared to post his American Flag for the same honor and tribute when officer Davis illegally threatened him and ordered him not to display his Flag, but Ted patriotically proceeded. Incredulously, Mr. Davis took out his handcuffs and placed “Mr. Patriot” under arrest – illegally!

VA policeman M. Perez showed up as I was photographing all of this illegal, immoral and unpatriotic activity while standing on the Veterans Freedom Plaza, a designated free-speech area of the National Veterans Park.

Perez assertively came straight at me and asked what I was going to do with my film and I said it is evidence, my evidence for trial, and he said “you post photos on blogs” and I said that’s “Freedom of the Press” and he ordered me to surrender my camera to him or he was going to place me under arrest. This is flat-out illegal! Nonetheless, he illegally seized my camera, illegally handcuffed me, illegally placed me under arrest and issued me an illegal citation.

Perez used unnecessary force after he illegally took possession of my camera and evidence photos.

I fully cooperated as I knew he was in serious violation of the law, just as you are Ms. Brown, by ordering VA police to carry out your Chicago-style of police thuggery.

Instead of letting me walk on my own, he kept pushing me forward — cuffed with my hands behind my back — and illegally forcing me away from the Veterans Freedom Plaza onto the grassed public park where his government-owned SUV was parked. He put me in the back seat where it was even more painful on my wrists and also made a longtime back injury extremely painful and uncomfortable.

Ms. Brown, this is your idea of a “Veteran centric” VA — Chicago-style — illegally and immorally enforcing your personal laws and punishment onto innocent Veterans, albeit elderly ones.

In sum, you make up your own laws day-by-day compounded with illegal arrests that intentionally inflict harm and injury to elderly Veterans as “punishment.”

Is there anything that you and your staff do that is legal and moral? Just one thing?

Let there be no misunderstanding Ms. Brown, policeman Perez was the one breaking the law by illegally and maliciously inflicting painful punishment upon me in your behalf.

Let me be very clear Ms. Brown, I did not break any law. To the contrary, it is you and your sycophants who are routinely breaking the law.

Once again Ms. Brown, this is your Chicago mob-boss temperament and dictatorial style of “leadership.”

It is unacceptable anywhere in the USA.

When M. Perez ordered me out of the back of his SUV, my ARMY baseball cap was knocked sideways and being the classless thug that he is, he pulled the bill down as hard and far as he could. He’s a street thug operating as an imposter in a VA police uniform.

When he was taking the handcuffs off, M. Perez made sure that he would inflict even more pain as he twisted my arms. When I was finally freed from your illegal imprisonment and falsified arrest, there were huge indentions into my wrists which broke the skin.

After I was finally un-cufffed, I returned to the Veterans Freedom Plaza, called 911 and the paramedics came to treat my wrists.

As though this hostile misfit didn’t violate enough laws, M. Perez intentionally and illegally seized my driver’s license and took it with him.

I had to make three phone calls to the VA police dispatcher before another officer returned it. M. Perez was too irresponsible and too much of a coward to personally return my driver’s license that he illegally seized. Perez is unfit to be entrusted as a public civil servant and must be relieved of duty, posthaste.

And so is another of your gangster puppets, Andres Centeno who operates under the ruse of your deputy chief of police.

At 7:07 AM this morning, he sent the following e-mail supposedly regarding policeman Garca (Garcia?) your “officer of the year” who went ballistic on Memorial Day and broke every law imaginable while issuing illegal arrest citations to me:

So, would you like to sit down and talk to me about this complaint? I would like to gather more information from you. Otherwise, I will be forced to close the complaint as unfounded without your side of the story.

Mr. Centeno is obviously trying to divert from yesterday’s huge blunders in addition to being upset that I refuse to meet with him as he wanted to view my “videos” of Garca’s misconduct so he could give a falsified conclusion on Garca’s behalf – a classic “good ole boy’s club”.

After M. Perez illegally seized my camera yesterday, Mr. Centeno was shocked there was no video of Garca and his Dr. Jekyll and Mr. Hyde personality – only one where Garca is unrecognizable in his overly polite demeanor in another falsified arrest of Ted Hayes, as opposed to his out-of-control hostile misbehavior when he illegally assailed and cited me.

You can tell Mr. Centeno that my evidence against R. Garca, M. Perez, Dennis Troy, himself, you, et al., is well-founded and I certainly do not need to engage the local Chicago mobsters to prove how corrupt and out-of-control your entire staff really is, as you will all be under full investigation by bona fide investigators … very soon.

Ms. Brown, I’ve lived in Brentwood for more than 22 years. Thus, I am a resident and a U.S. Military Veteran and you have come into my home town trying to destroy my good name by attending a local community meeting and boasting that you “ordered” the VA police to issue the “illegal” arrest citations and to confiscate our American Flags.

You clearly showed your classless mob-boss mentality and while it may be accepted amongst your few wealthy elite cohorts and spineless VSO leaders, it is unacceptable with the vast majority of residents and bona fide Veteran activists.

Moreover, you are fabricating citations for photography and illegally seizing my camera with my evidence against your corrupt and out-of-control Chicago gangsterism.

All of this is illegal and yesterday simply underscored how desperate and out-of-control you and the VA police really are. Grow up and face Reality and the Truth because it’s headed your way like a bullet train.

Ms. Brown, you crossed a serious line yesterday by the illegal and intentional inflicting of physical harm to an innocent 74-year old Veteran.

I definitely fear for my life now as you hail from a city where murder is acceptable and yesterday’s intentional physical harm is just one gunshot away from where the handcuffs are clipped to the belts of your lawless posse.

Ms. Brown, your Chicago-style of gangsterism is unwelcome here in West Los Angeles and so are you.

Your boss, Robert A. McDonald is a pathological liar, cheat and thief, and you both need to resign posthaste so that we can be safe and operate these sacred grounds as they were legally and congressionally deeded — as a National Home for disabled and homeless Veterans, in addition to finally ending Veteran homelessness in Los Angeles just as your feckless and corrupt boss promised in his counterfeit settlement agreement.