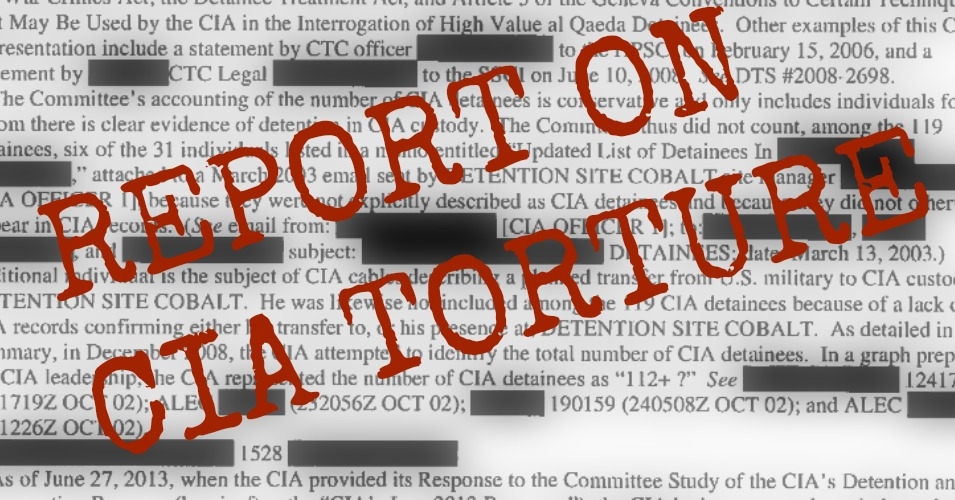 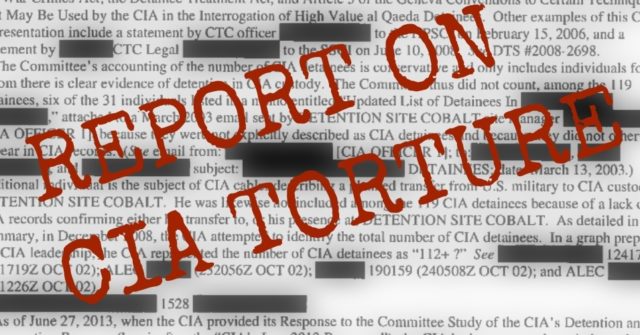 [ Editor’s Note: The 800 pages the Senate Intelligence Committee had gotten to see are open to the rest of us now. We were generally aware of most of the topics revealed, but have more details and confirmation. Click on the 2014 link below for a good review on the top ten nasties.

The ACLU went to all this trouble to create a public demand for prosecutions, which may be tilting at windmills after all this time. The sad irony in all this is that only one CIA person has been punished, and that was John Kiriakou, sentenced and imprisoned until his early release last year for going public about the program in 2007. How did he feel about it?

“In truth, this is my punishment for blowing the whistle on the CIA’s illegal torture program and for telling the public that torture was official US government policy,” Kiriakou said in a letter last May sent from a Pennsylvania prison.

Cheney of course has declared he would do it all over again, no surprise there. John Brennan claims it is overblown to say that no information of any value from the enhanced interrogation program.

But Dianne Feinstein clipped his wings quickly on that, stating that there was  “no evidence that terror attacks were stopped, terrorists captured or lives saved through use of EITs.” She should know, as chairwoman of the investigation committee for four years.

After all that has been said and done, we would like to feel that at least a few things were learned from America’s real Rocky Horror Picture Show, that might make a repeat less likely. I have seen no evidence whatsoever for that… Jim W. Dean ]

Disturbing details of “illegal” torture techniques used by the US government after the 9/11 attacks were revealed by the Central Intelligence Agency (CIA) following a Freedom of Information Act (FOIA) request from the American Civil Liberties Union (ACLU).

More than 800 pages were released Tuesday, which the ACLU says highlights the “inhumanity of the torture conceived and carried out” by the CIA under the George W Bush administration.

The documents, some of which have redacted content, were previously seen by the elite group of politicians called the Senate Intelligence Committee as part of its probe into the “enhanced” interrogation program.

“It bears emphasis that these records document grave crimes for which no senior official has been held accountable,”ACLU deputy legal director Jameel Jaffer said.

“We’re seeing just how much (James) Mitchell, (John ‘Bruce’) Jessen, and their CIA co-conspirators knew that what they were doing was wrong and illegal.

They talked about seeking a get-out-of-jail-free card for torturing people, and then discussed how to make sure their victims were silenced forever, even if they survived their torture.”

Instead of being convicted for war crimes, some of those responsible occupy powerful positions like federal judge, law professor, and vice president of a defense contractor.

Although some of the details have been previously reported, these documents further detail the gruesome methods used during the lifetime of the covert operation. Jaffer said in a statement that the files “under­score the cruelty of the methods used in [the CIA’s] secret, overseas black sites.”

Among the gruesome details found in the files is a 35-page internal investigation into the interrogation and death of Gul Rahman known as the “Death Report.”

Rahman froze to death in a CIA secret prison in Afghanistan in 2002 after being doused in water and left in a cage semi-naked with no blankets or any form of heat as temperatures dropped below 32 degrees Fahrenheit (0 degrees Celsius).

The same investigation details how “prisoners who possess significant or imminent threat information” were often“stripped to their diapers during interrogation and placed back into their cells wearing only diapers.”

The report goes on to say that if there were no diapers to hand, prisoners were “placed back in their cells in a handcrafted diaper secured by duct tape” or sometimes completely naked.

It is also shown in the files that some CIA employees had objected to some of the techniques being used on the suspects, as well as the legitimacy of their detention.

One memo detailed how a field officer had “serious reservations with the continued use of enhanced techniques” on suspected Al-Qaeda operative Abd al-Rahim al-Nashiri, who remains at Guantanamo Bay today.

It’s equally clear, however, that other officers, including those in the higher ranks, found the covert operation to be both effective and within legal bounds.

James L Pavitt, the deputy director for operations at the time, said in a 2004 memo that he believed only an internal probe would confirm the agency’s “fundamental respect for human values.” Instead of sitting in his own prison cell, Pavitt currently serves on the board of the Scowcroft Group, which is named for the former National Security Advisor for Presidents Gerald Ford and George H.W. Bush.

One “special review” by the CIA found some felt it would be important for the agency to hide the extent of the torture, indicating that relevant detainees should be hidden from representatives of the International Committee of the Red Cross for as long as they live.

Another draft letter shows how the CIA applied to the Justice Department, asking the attorney general to “grant a formal declination of prosecution” for any future measures taken by their personnel against Abu Zubaydah. The Al-Qaeda suspect, referred to as AZ, remains at Guantanamo Bay.

The application was made as the methods they intended to use on Zubaydah “normally would appear to be prohibited under the provisions” of the federal law known as the Torture Act. A number of torture methods have been used against Zubaydah. He was subjected to 83 waterboarding sessions and was placed in a coffin-sized box for a total of 266 hours (11 days, two hours) over a 20-day period.

“All major players are in concurrence that AZ should remain incommunicado for the remainder of his life,” a memo reads.

The use of such interrogation techniques was banned by President Barack Obama in 2009, although presumptive Republican nominee Donald Trump said in February that if he was elected, he would “bring back a hell of a lot worse than waterboarding,” echoing his previous sentiments on it.

Trump was forced to clarify his remarks in March, however, claiming he would be “bound by laws just like all Americans,” but did add that he would “have those laws broadened.”