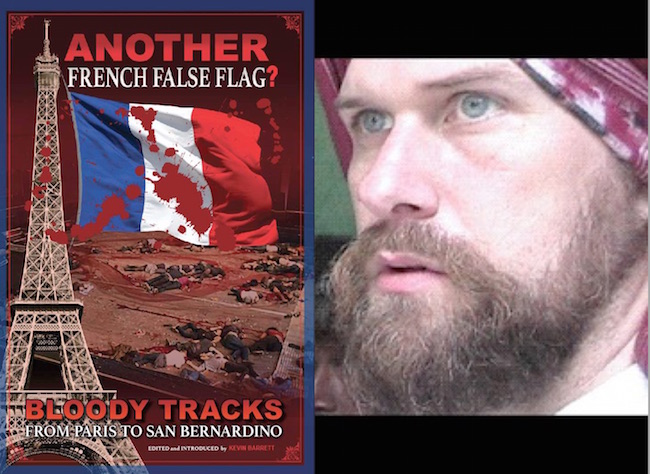 Rafiq is a self-exiled Canadian intellectual whose books GAJ and Days of Shock, Days of Wonder are both highly recommended. Below is his review of my most recent edited volume on false flags—timely reading in light of recent events in Orlando. -KB

The Clash of Histories

Reading Kevin Barrett’s edited collection of essays on false flag history in the twenty-first century is a dissonant experience. On the one hand, the daily media tell us stories about a “war on terror” started by crazed Muslims on 9/11. This war is said to be waged in the present day by al-Qaeda’s offspring, called ISIS, in the form of mass murders like the Paris Attacks of 2015. On the other hand, scholars like Barrett and the twenty-five thinkers represented in Another French False Flag? tell us stories about a “war on terror” fabricated by the CIA and Mossad on 9/11. This war is said to be furthered in the present day in the form of ongoing attacks by Western governments against their own people. Clearly, there is a clash of histories going on. The outcome of this clash could very well determine whether the coming century will be dominated by war.

The essays in this collection read like the core of a history curriculum fifty years in the future.

That is why Another French False Flag? is such an important book. Its wide-ranging collection of essays provides a view of our current history that shatters the official government and media story about the “terrorist attacks” that have befallen the West. Essays like these ones aren’t usually written until long after the events have passed, when it’s too late to change history. Indeed, the essays in this collection read like the core of a history curriculum fifty years in the future. With the publication of this book, we see that history has caught up with itself. Today, the tricks of those who want to steer history have been used too many times to go unnoticed.

As Barry Kissin points out in his chapter on the urgency of exposing false flag terror if we are to secure peace, the CIA’s history of using this tactic to overturn governments has long been declassified. As an example, he cites the CIA-led coup that overthrew democratically elected Iranian president Mohammad Mossadegh in 1953. Kissin writes, “The record now affords us a comprehensive view of the makings of what is destroying today’s world.” Similarly, Gearóid O Colmáin traces the use of false flag terrorism by deep state actors from Latin America in the 1980s to present-day Europe and Syria. Notably, the agents who carry out such false flag terror attacks are likened to Nazi “brown shirts” in Colmáin’s chapter. All the way back to Hitler’s Germany, we see that terror by governments against their own people is not a new phenomenon.

Most striking about this kind of terror is that it targets innocent civilians instead of targeting the political enemies of those who are said to be the terrorists.

Most striking about this kind of terror is that it targets innocent civilians instead of targeting the political enemies of those who are said to be the terrorists. This tactic of terrorizing the populace has long been used by fascists to further anti-democratic agendas. When terrorism of this kind is blamed on others, we can be sure that we are observing a false flag event. More than that, from 9/11 to Paris, Another French False Flag? identifies the telltale signs of modern-day false flag terror.

Among these common traits is the fact that there is never an investigation before blame is assigned. As Ole Dammegard describes in his chapter, the official story of the Paris Attacks was posted on Wikipedia less than two hours after the attacks had begun,  complete with President François Hollande’s comment to the nation that France should “close the border” to keep out murderous Muslims. Few noticed that the president did not actually make this comment until fifty-two minutes after Wikipedia reported it.

The terrorists who are blamed always leave behind their ID, either a passport or a driver’s license.

Additional recurring features of false flag attacks are discussed in the chapters by Paul Craig Roberts and Nick Kollerstrom, among others. These include the fact that terror drills replicating the specifics of the attack are always running at the same time. In the case of the Paris Attacks, the number of dead in the terror drill just happened to be identical to the number of dead reported after the live attack. Further, the terrorists who are blamed always leave behind their ID, either a passport or a driver’s licence. And, most convenient, some kind of technical failure, like failed subway cameras, usually aids the terrorists. Roberts reports that during the Paris Attacks, “the French police were blinded by a sophisticated cyber attack on their mobile data tracking system.”

What perhaps most reveals the involvement of governments in these attacks is their prior “surveillance” of the Muslims who end up being blamed. Although said to be under investigation before the attacks, these people are permitted to cross borders unimpeded, establishing a pattern of suspicious behaviour that is later used against them. Warnings about these behaviours are ignored, and the terrorists are often hunted down and killed afterward, lest they confess that they are covert federal assets who are being used or framed by their employer. Roberts states, “By my last count, the FBI on 150 occasions has successfully deceived people into participating in FBI orchestrated ‘terror plots.’”

Another French False Flag? provides us with a handbook by which to identify false flags and thereby free ourselves from psychological manipulation by the agents of fascism.

False flag attacks are psychological operations intended to terrorize. In Hitler’s time, those who carried out the terrorist killing of innocent civilians face to face were members of “death squads.” Today, they are mercenaries hired by “private security” firms. In both Paris and San Bernardino, these mercenaries turned up in eyewitness accounts. Contrary to the official story about Arab Muslim terrorists, witnesses to both events reported that the shooters were “white men in black military attire.” In documenting the similarities between such attacks, Another French False Flag? provides us with a handbook by which to identify false flags and thereby free ourselves from psychological manipulation by the agents of fascism.

More than that, Barrett and his colleagues situate our governments’ modern-day use of false flag terror in the unfolding of history, painting a clear picture of why this fascist campaign is being waged now and who benefits from the march toward a third world war. Notably, the chapter by Anthony Hall discusses

NATO’s use of terror against civilians in Europe during the Cold War as a means to falsely discredit left politics, which is the method now being employed by NATO to discredit Muslims. He explains that “the same national security establishment created to fight communism was re-deployed in a very strange operation involving both the creation of, and opposition to, Islamic terrorism.” Only in understanding the agenda of the real terrorists – the deep state elites – can we intelligently confront their push to war.

Many readers may be shocked to learn of the murderous tactics used by our governments to shape public opinion and thereby the course of history. Why should this evil shock us?

At the beginning of Another French False Flag? Barrett writes, “based on what we know of other events such as 9/11, I think it’s fair to assume these new events are probably false flags, and put the burden of proof on the authorities and mainstream media to prove they aren’t.” I agree. But many readers may be shocked to learn of the murderous tactics used by our governments to shape public opinion and thereby the course of history. Why should this evil shock us? Why do many of us refuse to believe the evidence of this truth? Why do some of us become angry when confronted with a history that clashes with the official one?

Roberts offers this answer: “Some people are so naive and stupid as to think that no government would kill its own citizens. But governments do so all the time … Americans are not capable of believing truth. They have been brainwashed that truth is ‘conspiracy theory.’ A population this stupid has no future.” Roberts is only half-right. Being “naive and stupid” has little to do with it. He is closer to the truth when he concedes that we have been “brainwashed.” But even that isn’t accurate. Rather, events like 9/11 can be said to hypnotize us. When we are in a state of heightened fear, our subconscious is susceptible to hypnotic suggestion. Things implanted subconsciously bypass rational scrutiny and become difficult to dislodge.

Mujahid Kamran hints at this phenomenon in his chapter when he writes, “The people, who are in a state of shock, and are therefore in a highly suggestible state, are deeply influenced by the media.” Readers would do well to remember this fact when exploring the alternate twenty-first-century history presented in Another French False Flag? If the clash of histories is going to be won by the side of truth, it will require a mass awakening of Western citizens. And that isn’t going to happen unless we understand not only the tactics of the elite but also the psychological effects of those tactics, including the hypnotic effect of lies told to the traumatized. We don’t need to blame ourselves for suffering from this effect. We only need to recognize that it has prevented us from knowing the truth. Until now.

In short, Another French False Flag? is a book by the fearless for the fearless. It goes a long way toward countering the onslaught of war propaganda that passes for news today. In doing so, it stands as a great resource in the quest for global peace.