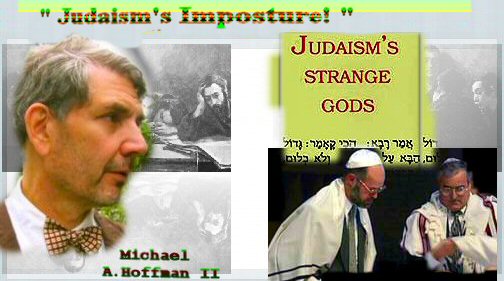 Michael Hoffman is an independent scholar based in Coeur d’Alene, Idaho. He is a former reporter for the New York bureau of the Associated Press. He was educated at the State University of New York at Oswego and Hobart College. He is the author of numerous books, including Judaism’s Strange Gods and Judaism Discovered.

Alexis: Many writers have already commented on the Orlando incident. My good friend Hugh Akins, who lives in Orlando and who wrote the book Synagogue Rising, told me that “The FBI had prior knowledge of Mateen’s shady background and twice investigated him for his radical ideology and suspicious affiliations and activities.” Akins believes that there is a connection between the Mossad and the incident. What’s your take on this issue?

Hoffman: Orlando terrorist Omar Mir Seddique Mateen was licensed by the state of Florida to carry firearms. His rifle may even have been part of his job. Since 2007 he has been employed by G4S Secure Solutions, a “global” security firm that provided protection to the London Olympics. Until recently, G4S had an Israeli section with 8,000 employees. G4S states on its website that Mateen was “off-duty at the time of the incident.” The Establishment media have shown little interest in reporting on G4S. Why?

Another Alibi for the Gun-Grabbers

Mateen’s access to firearms appears to be the same access enjoyed by tens of thousands of the hired guns who corporations and millionaires employ to ensure their own safety. How then can this be a case for another call for gun control? Hillary Clinton does not want to deny “assault” rifles to the people who protect her, or David Rockefeller, or who guard the Olympics; she isn’t seeking a total restriction on AR-15s.

Hillary and her wealthy cronies will always have bodyguards who legally possess high powered “military-style” weapons. She seeks to disarm the people, in whose name the Democrats claim they are working. The peasants are to be denied the weapons which the licensed agents of Her Majesty possess.

This is the path to a police state, which we saw at work in the now largely forgotten 1993 government massacre of 82 Americans at Waco, Texas which was ordered by Mrs. Clinton’s husband, and in in 1995 in Oklahoma City when a cabal of government agents and patsies bombed the Alfred Murrah building, killing 168 people. Congress then passed numerous laws restricting our freedoms and granting greater latitude to the police to violate our rights, although that was small beer compared to the aftermath of the 9/11 terror attacks and the enactment of the misnamed “Patriot Act.”

Lady Macbeth’s scapegoating of firearms is part of the script. She prefers to focus less on the Sunni-Salafist Muslim connection, inspired by Saudi Arabia’s Wahhabist theology, which is the ideological engine of the Islamic State (Mateen traveled to Saudi Arabia twice. Imagine if he had gone to Iran instead — sanctions would be demanded instantly).

If this writer were tasked with investigating the Orlando massacre we would be closely examining the circumstance of an Orlando police officer “exchanging fire” with the terrorist either prior to his entry to the club, or soon after he entered it.

The New York Times reported on June 14: “Soon after Mr. Mateen first opened fire, he was confronted by an armed security guard who was an off-duty police officer, said John Mina, the Orlando police chief, at a news conference Monday morning. They exchanged gunfire. The security guard was then joined by an unknown number of police officers, the first to arrive on the scene.” — Times, June 14, p. A1

Is this not strange? An unknown number of officers arrived on the scene “soon after” the terrorist opened fire and they did nothing to shoot or apprehend the killer until 5 a.m. — three hours later?

We would also be researching everything there is to know about G4S Secure Solutions and how, despite their boast that they thoroughly check their employees to be certain they have impeccable backgrounds, the Muslim Mateen, who had been repeatedly investigated by the FBI for terror connections, had been working for G4S from 2007 until the morning of June 12.

What type of work did G4S’s 8,000 Israeli employees undertake, both in occupied Palestine, the Mideast (Saudi Arabia in particular) and the US and Europe? Was Mateen any part of those missions?

Koran attacked while the Talmud is sacrosanct

On the morning of June 12 FOX News featured a former NYPD detective named Solomon who blamed the Orlando massacre on the Koran. “Just read it, you’ll see” he told the FOX television audience. What if, in the aftermath of an Israeli massacre of Arabs, this writer were to indict the Babylonian Talmud on national TV? We would be hounded off the airwaves in short order.

Alexis: That is so true. In fact, we should encourage serious readers and truth seekers out there to pick up a copy of Jesus in the Talmud, written by Princeton Jewish scholar Peter Schafer. Some would be surprised that the Talmud provides the basis for Jewish hatred toward all mankind, most specifically hatred toward Christians.

Consider this passage from the Talmud about the events surrounding Jesus’s death:

“Jesus of Nazareth is to be executed by stoning for witchcraft and for leading Israel astray. Will anyone who know anything in his favour come forward and plead for him! They found nothing in his favour, so he was hanged on Passover Eve.”[1]

Hoffman has also done a great job categorizing these kinds of passages in the Talmud. Here is a representative sample from his study Judaism Discovered:

Many Jews would quickly respond that passages like these are taken out of context. Yet this is clearly not so. All of these passages have been exegetically documented and contextually examined. The Talmud, Schafer says, “is an inversion of and polemic against the New Testament narrative of Jesus’ birth.”[4]

Schafer moves on to say that the Talmud, which contains many such personal attacks on Christ and Christians, challenges “the foundations of the Christian message. It is not just a malicious distortion of the birth story; rather, it posits that the whole idea of Jesus’ Davidic descent, his claim to be the Messiah, and ultimately his claim to be the son of God, are based on fraud.”[5]

Many Christian Zionists would be surprised to know that Netanyahu says that Israel’s legal system is based on the Talmud.[6] In other words, Israel’s legal system is based on a text that is inexorably anti-humanity. The question then becomes, will people political sluts and whores like Pamela Geller tell their readers about these facts? Will Ann Coulter and others point these out? If not, then E. Michael Jones was right after all:

“When I hear an American talk about the dangers of ‘Islamofascism,’ I think it’s an infallible sign that I am in the presence of either a propagandist, an intellectual coward or a useful idiot.”

[6] Marissa Newman, “Netanyahu reported to say legal system based on Talmud,” Times of Israel, May 8, 2014.