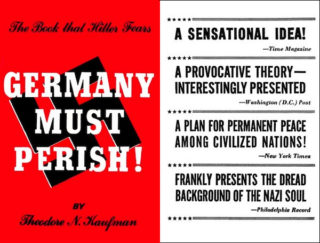 I just found verified what I have long suspected – that rampant German-bashing is a meme. According to Wikipedia,

A meme (/ˈmiːm/ meem) is “an idea, behavior, or style that spreads from person to person within a culture”. A meme acts as a unit for carrying cultural ideas, symbols, or practices that can be transmitted from one mind to another through writing, speech, gestures, rituals, or other imitable phenomena with a mimicked theme. Supporters of the concept regard memes as cultural analogues to genes in that they self-replicate, mutate, and respond to selective pressures.

So there you have it – German-bashing is contagious, much like a virus. It is a weaponized belief triggering behavior that targets an identifiable minority – those who lost WWII! – and, as the years go by, their offspring for good measure. It has the power to annul an ancient dictum found in the Bible and other holy books: “Thou shalt not bear false witness…”

It is extremely harmful to a subset of society; It can obliterate a people’s very self. Just look at Germany for a resounding object lesson. Have you ever seen a people grovel and cringe disgracefully before the most audacious German- basher to advertise that they agree with the applied abuse and are more than willing to do penance for what the Germans did to the Jews?

Does anybody dare to ask what the Jews did, and still do, to the Germans?

I herewith register my grievance against all German-bashers, friend or foe. I say it’s vulgar, rude, low-brow, unfair, and tasteless to the max. More yet, I know from personal experience that German-bashing hurts! It has all the features of shingles – lying in wait until it can strike with the fire of hell at the sight of a politically incorrect German.

The German dissident, Ernst Zundel, known as an “anti” German-basher extraordinaire world-wide, is someone I know well. Some forty years ago, Ernst Zundel’s youthful spirit, singled out and targeted by notorious German-bashers such as B’nai Brith of Canada, settled on a mission to put a stop to undeserved hostility against his people’s forebears.

He put on his German father’s soldiers’ boots with which he kicked the Wailing Wall three times and pledged, to paraphrase his hero, Thomas Jefferson of Monticello, that “ …I have sworn upon the altar of God eternal hostility against every form of tyranny over the mind of man.”

That’s Ernst. That was no pussyfooting milquetoast. That was an Aryan speaking. In front of God and Man, he registered his German people’s victimhood and said he would avenge it. And he made good on it. What Ernst has done forensically to stop the German-bashing globally is written in the annals of European history. It cannot ever again be erased.

I joined him decades later – seven years before the New York Towers fell. I did confess to him before I ever met him – and will confess it here and now – that in my youth I, too, was guilty now and then of trendy German bashing. I, too, was once a Holocaust Believer, like every other fool on earth. Do-gooder that I was, I wanted to fit in.

It was incumbent upon me, or so I thought, to do my share of bashing.

It was a reflex on my part, much like a sneeze – I simply couldn’t help it. I thought that it was only right to offer one’s apology as well as ample compensation – for all eternity. I, too, was vulnerable to trigger words that made me feel guilty for unspeakable crimes assumed to have happened to Jews – but even then, I always flinched a bit when I saw others bash my Folk to their own heart’s content. 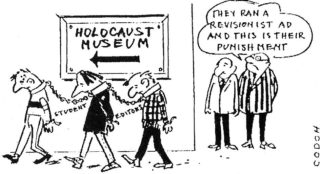 “Bless you!”, I’d say, but only to myself. My friend, Elena, taught me that. Or else, “… oh, you poor dear. Poor Holocaust survivor! Obsessing all day long. Please let me pat you on the head to let you know I am politically correct.”

It’s still a bit of a moral dilemma for me to come right out and call a spade a spade. I speak of “globalists” or “neocons” or “banksters” or “internationalists” because I cannot bring myself to call a Jew a Jew. Well, don’t we all? Can you say Nazi? Sure. Why not? Can you say Jew? Please! Ohmygod! Where is the nearest mouse hole?

And this despite the fact that my own father, when I was barely five years old, was exiled to Siberia for being German in the Soviet Union, , and that I never saw him again. As history records, most Soviet kommissars were Jews.

It’s got to stop. We’re dealing with a malicious spirit virus. Just as you can’t eradicate the measles by treating one sore at a time, eradicating German-bashing cannot be done piecemeal by trouncing one Holocaust Survivor’s lie at the time to make room for historical truth.

That’s what Revisionists have done – they thought that science and reason and logic would do it. It didn’t work that way – for once a meme has infested one’s soul, not even Einstein can get a scientific handle on the topic of so-called Jewish genocide at the hand of the racially mischievous Nazis. Does that not tell you something? 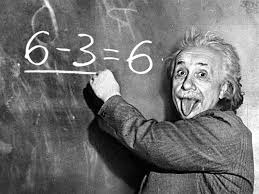 To cure systemic German-bashing has got to be a global effort, and I invite all people of good will to help eradicate the curse upon a decent people. You’re dealing with a very stubborn meme that acts like a chameleon – it’s not perceived as harmful und unfair; it makes you think you need to be politically correct and go out of your way to humor German-bashers. BS to that idea! Sheesh!

Don’t we all know in our era, monuments are built to German-bashers – who are, if you look closely enough, mere asses?

Ernst Zundel spent a lifetime demolishing that noxious meme. When he was young and daring and Canada was still an Anglo-Saxon state where you could speak your mind and not have to look over your shoulder, he was quite popular on talk show radio. In controversial talk shows such as Max Lipson’s programs, he challenged German-bashers by the thousands from coast to coast in Canada. I wish I’d known him then. He would have changed my PC weltbild in a proverbial New York minute!

As the custodian of the Zundel archives, I have unearthed several master tapes where Ernst tackled the hoary topic of Auschwitz and such in the perception of the average Canadian. Those were the halcyon years where you could speak your mind without fear of talking yourself right into prison. How often, on the air, did Ernst ask for German-bashing to be stayed – at least until forensic evidence could clear the atmosphere and settle grievances on both sides?

His counterpart, the fabled Jewish radio host, Max Lipson, was known as the Dean of Talk Radio. Max Lipson and Ernst Zundel, then still the best of friends, talked about Jews a lot, on radio and off. Both knew that Jews controlled the media, including radio, but it was not an issue then because Canada was still an Anglo-Saxon country in its social make-up and mores.

Well, that was then – and now is now. Some claim that, in the later 1960s and early ‘70s when Ernst appeared on the Canadian political scene to run for political office, he was a youthful Donald Trump. That’s stretching it a bit, although I can spot similarities. Both are of German background. Both have the peasant touch. Both shoot from the lip, and both were then, as they are now, savagely victimized by folks who are amazing experts at furious German-bashing.

Unlike The Donald, though, Ernst was no billionaire when he aimed for the highest office. Talk about chutzpah to run against Pierre Trudeau! Ernst even made it to the finalists, although these days that achievement is swept under the rug. Ernst had in his election kitty a grand total of $3,750.- a small fortune in those years, created by his brushes, whereas his globalist opponent leaned on his multicult sponsors who underwrote the Trudeau election campaign to the tune of $375,000. 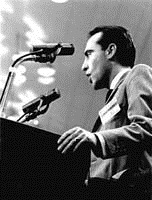 The rest is history.

Here as there, the end-goal of the globalists, of which Trudeau was one illustrious member, was destruction of a way of life that served good people for millennia. In Germany, the guilt cudgel “Auschwitz” has just about finished the job. The Germans now crawl on their bellies and welcome any Hottentot with open arms to partake in what their industrious forebears achieved. Here in America, that last act is playing right now.

Today, Ernst is arguably the best-known dissident in Europe, highly respected by many and equally hated by some. After having been politically kidnapped under cover of the Patriot Act, Ernst spent the next 7 years locked up in six prisons in three countries on two continents – for what? For murder? Racketeering? Money forging? Child molesting? No. For merely fighting German-bashing. The courts of Western countries are in the business of German-bashing, too.

Here’s Orwell, paraphrased: “All dead are equal, but some dead are more equal than others.” You can defame the German dead until the cows come home – but not the Jewish dead!

Part II – Why Turn into a German-bashing Bully on Command?