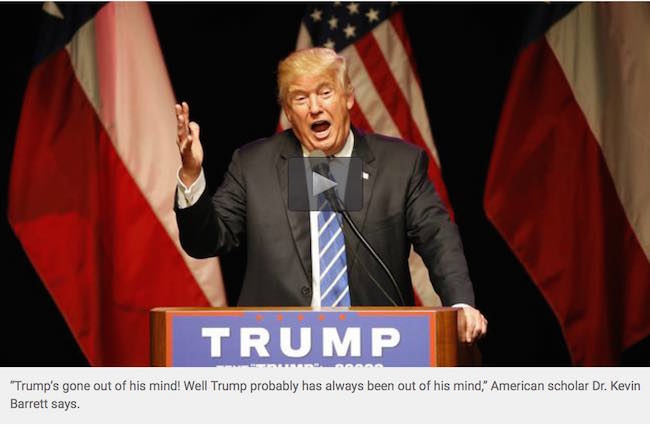 Presumptive US Republican presidential nominee Donald Trump — a psychopath, narcissist, and megalomaniac — is fueling genocidal Islamophobia in the United States to get elected president, according to American scholar and Veterans Today Editor Dr. Kevin Barrett.

Dr. Barrett, a founding member of the Scientific Panel for the Investigation of 9/11 and founding member of the Muslim-Jewish-Christian Alliance, made the remarks in an interview with Press TV on Thursday while commenting on Trump’s intensified rhetoric against Muslims in the wake of Sunday’s mass shooting in Orlando, Florida.

US President Barack Obama on Tuesday condemned Trump, and rejected his demands that the president use the phrase “radical Islam” in reference to the Orlando massacre and other mass shootings.

He stated that “the political class in the US wants to pursue a strategy of tensions, but they don’t want to become another Nazi Germany.”

“They don’t want to have Muslims rounded up and put into concentration camps, barred from the country. They don’t want an open war on Islam, which is not in the interest of the US ruling elite,” he added.

“Trump on the other hand is just is a psychopath, and a narcissist, and a power-hungry maniac who essentially wants to essentially grab the presidency using this kind of inflammatory rhetoric to connect with people who feel disenfranchised, who lost their jobs, who lost their futures, who see a country in which increasingly all kinds of madness is taking over,” the American academic stated.

“So Trump is playing a political game that actually is at odds with that of the people who are in fact behind these events who are cynically trying to incite the Islamophobia and trying to use it for their purposes… well, he is doing the same thing only vastly in a more dangerous way, and, so there is split within the US ruling elite,” he pointed out.

“But all of them are on board with the program of mass false flag murders of American citizens beginning with the people who blew up the World Trade Center on September 11th of 2001,” he argued.

“The American people not only need to rise and repudiate the genocidal Islamophobia of Trump but also the slow-motion genocidal of the American political elite,” the analyst emphasized.