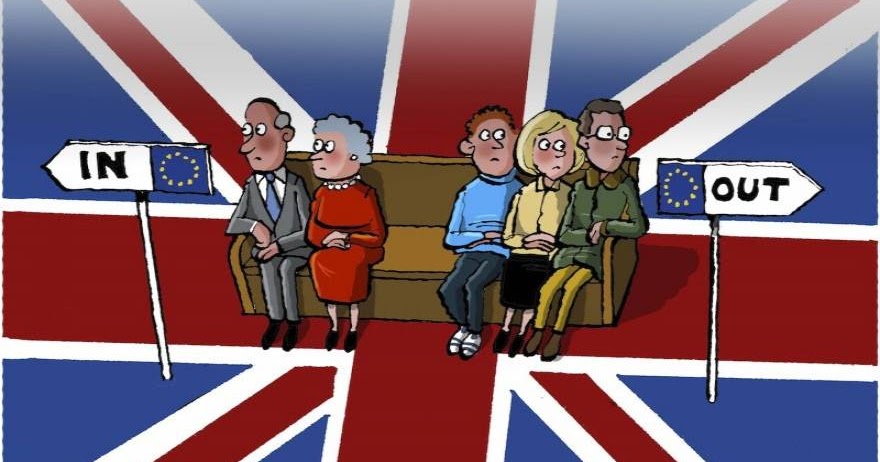 A referendum is being held on Thursday, June 23rd, to decide whether Britain should leave or remain in the European Union. To many, Britain leaving the EU is the equivalent of escaping fortress Europe, with all its stifling rules, tariffs and regulations, as well as the growing possibility of a United States of Europe and new world order. As expected, Prime Minister David Cameron, President Obama and the corporate media are solidly for maintaining the status quo but the bottom up forces of change are determined to rightfully be heard on June 23rd. Here’s the movie, produced by the masses, to explain it to you and let’s hope the votes are legally counted: Allen L Roland, PhD London Mayor, Boris Johnson claimed that some opponents have been marginalized by the agents of Project Fear ~ the label used by Brexit campaigners to criticize the fear based tactics used by David Cameron and his corporate media allies backing the status quo and a Remain vote ~

“This is like the jailer has accidentally left the door of the jail open and people can see the sunlit land beyond ~ and everybody is suddenly wrangling about the terrors of the world outside. Actually it would be wonderful… It would be a huge weight lifted from British business.”  Boris Johnson /  Mayor of London Brexit: The Movie ~ lays bare the nature of the European Union – and shows why millions of Brits are voting to leave it.

Brexit: The Movie ~  blows apart the pro-EU propaganda, and makes the case for an independent, confident and outward-looking Britain

Brexit: The Movie ~ is a feature-length documentary film to inspire as many people as possible to vote to LEAVE the EU in the June 23rd referendum.

Brexit: The Movie ~ spells out the danger of staying part of the EU. Is it safe to give a remote government beyond our control the power to make laws? Is it safe to tie ourselves to countries which are close to financial ruin, drifting towards scary political extremism, and suffering long-term, self-inflicted economic decline?

Brexit: The Movie ~ shows a side of the EU they don’t want us to see: the sprawling self-serving bureaucracy, the political cynicism, the lack of accountability, the perks, the waste, the cronyism, the corruption.

Brexit: The Movie ~ cuts through the patronizing intellectualism of the noble, higher goals of ‘Project Europe’, to reveal the self-interestedness of the political-bureaucratic class which runs and benefits from the EU.

Brexit: The Movie ~ highlights the danger of becoming a prisoner in an insular, backward-looking Fortress Europe. And it explores the exciting opportunities that open up to us when we look beyond the narrow confines of the EU ~ an example being Switzerland.

Brexit: The Movie ~ looks to the future, arguing forcefully and persuasively that it is safer and wiser to live in a country which is free, independent, self-governing, confident and global.

A Crowdfunded film for the British public as well as interested American observers and nervous EU members.

“Regarding the consequences of a Brexit, I have said that a deserter would not be welcomed with open arms. That is the stance of the commission as well as the attitude of other governments. And of course, it would have implications for voting patterns in other countries which are going in a direction that we do not wish for” : European Commission President Jean-Claude Juncker

Brexit : The Movie ~ is a crowdfunded production, financed entirely by donations from the public and is extremely well done. It was made possible thanks to the support of more than 1,800 backers, who raised over £300,000 with donations from as little as £1.  See article ~

“First they make us pay in our taxes for Greek olive groves, many of which probably don’t exist. Then they say we can’t dip our bread in olive oil in restaurants. We didn’t join the Common Market ~ betraying the New Zealanders and their butter ~ in order to be told when, where and how we must eat the olive oil we have been forced to subsidize.”  Boris Johnson, on EU problem.

Heart centered spiritual consultant and advisor Allen L Roland can be contacted at allen@allenroland.com Allen is also a lecturer and writer who shares a weekly political and social commentary on his web log and website allenroland.com. He is also featured columnist on VT and is a featured guest on many radio and Television programs