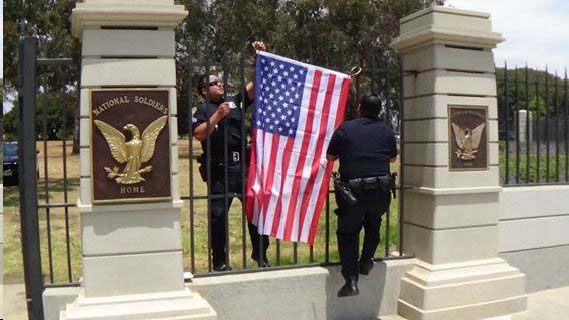 LOS ANGELES – The white-collar crime and corruption at the Los Angeles VA is out-of-control and so is police brutality as last Sunday, June 12, VA cop M. Perez (Badge #2140) delivered a pain-inflicted, mobster-style message to Old Veterans Guard members (me specifically) who take photos of their illegal activity of issuing falsified criminal arrests citations when we proudly display the American Flag in honor of the men and women who have defended our Nation’s Colors for more than two centuries.

If what the VA police have been doing is “legal,” wouldn’t they be proud of their action and want their photographs taken and published on the Internet?

However, it is they and their superiors who are criminally breaking the law and shamefully and cowardly confiscating our American Flags as “evidence” by declaring Old Glory is nothing more than a “a placard, a hand bill pamphlet and / or a handbill,” even “material” equal to dirty socks and underwear.

Sixteen of these previous falsified arrest citations were dismissed in Federal Court and the VA cops and bureaucrats are angry and more retaliatory than ever.

Now, they are making it violent, brutal and personal.

VA police officer Perez illegally used the “color of law and authority” to execute his own pain-inflicted punishment for my lawful taking photos of him and officer Davis who had falsely arrested Ted Hayes, aka “Mr. Patriot,” and illegally put him in handcuffs for displaying the American Flag

On June 12, officer Perez “lost it” as he specifically and illegally wanted to know what I was going to do with the photos I was taking of them and angrily and vindictively placed me under false arrest and illegally seized my camera.

He did this while I was lawfully on a designated free-speech area – a public plaza outside the National Veterans Park and then illegally handcuffed me.

Officer Perez took me into custody and forced me out of public view to exert extreme and forceful pain with continued pressure on my wrists that inflicted harsh and memorable pain.

Officer Perez forced his handcuffs on me intentionally tight and when I complained about the severe pain he brazenly proclaimed:  “when you break the law, it is going to hurt.”

Let there be no misunderstanding, I broke no law as it was VA cop Perez who broke several laws by illegally and violently placing me under false arrest so he could inflict his own brute and painful punishment for my taking photos of him and officer Davis’s illegal arrest of Ted Hayes.

This is out-of-control VA police brutality against Veterans and Patriots who expose the Truth about their corrupt, immoral, unpatriotic and illegal assault on the American Flag

Officer Perez put me into the back seat of his VA SUV vehicle and kept tightening the handcuffs with my hands behind my back, intentionally inflicting serious pain.

Officer Perez then lied by saying he could stick his finger between the handcuffs and my wrists, and even called VA officer Davis over to falsely confirm his lie.

The photos below clearly show that there was no airspace between my wrists and the handcuffs, shutting off the blood circulation.

I was lawfully taking photos of him and officer Davis’s illegal activity while on a public forum, permission granted via the U.S. Constitution.

This is how desperate and ashamed VA cops are of themselves for issuing illegal arrest citations for displaying a “placard” to innocent and elderly Veterans and Patriots who lawfully display the American Flag.

Perez’s Al Capone-style of hidden-message was quite clear; the next time you take photos of our illegal activity, we will break your wrists and your camera.

VA mob boss Ann R. Brown, acting under the color of law and authority, has given VA police carte blanche to do whatever it takes to eliminate the Old Veterans Guard from exercising our Constitutional First Amendment Rights at Veterans Freedom Plaza outside Veterans National Park.

“Federal Statute 18 USC Section 242 makes it a crime for any person acting under color of law, statute, ordinance, regulation, or custom to willfully deprive or cause to be deprived from any person those rights, privileges, or immunities secured or protected by the Constitution and laws of the U.S.”

These criminal thugs have stolen our U.S. Constitutional Rights, now we fear for our lives.

During the Vietnam War era, I proudly served in the U.S. Army but was spared the brunt of the battle against the foreign enemy.

Now, however, I’ve been physically assaulted by entrusted public civil servants of the United States Government on American soil

We have found the enemy, and it is our own government. 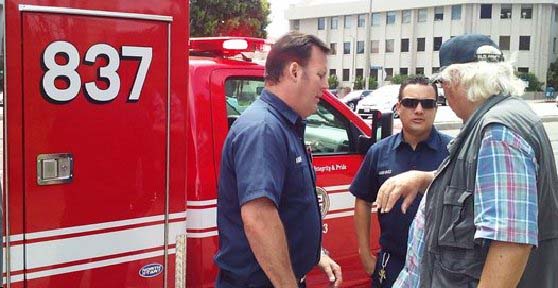 After being un-cuffed and released by VA cop Perez, I called 911 and Paramedics came to administer a sterilization ointment on the skin break on my right wrist and instructed me to keep my hands elevated and wiggling my fingers to keep blood circulation activated. 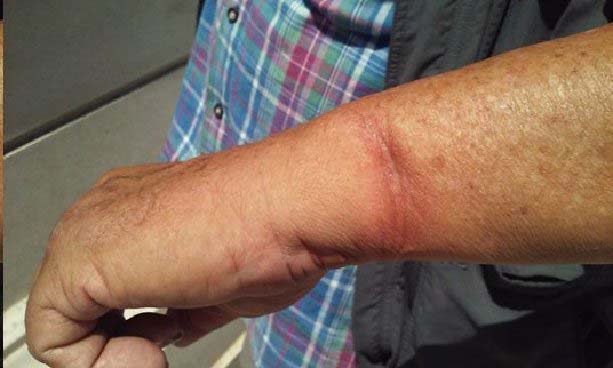 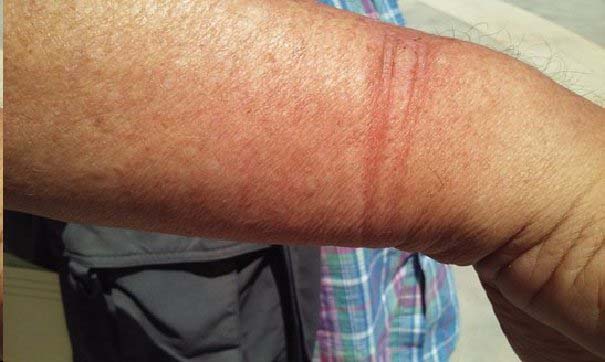 Perez lied and said he could stick his finger between the handcuffs and my wrists and VA police officer Davis “agreed.” 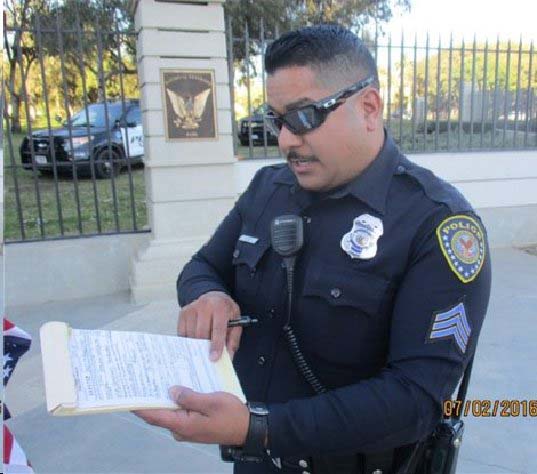 Officer Perez issuing me a falsified arrest citation on February 2, 2016 for displaying a “placard,” which was subsequently dismissed in Federal Court.  This angered him and other VA police officers as well as their superiors who delivered the orders to issue the unlawful arrest citations. 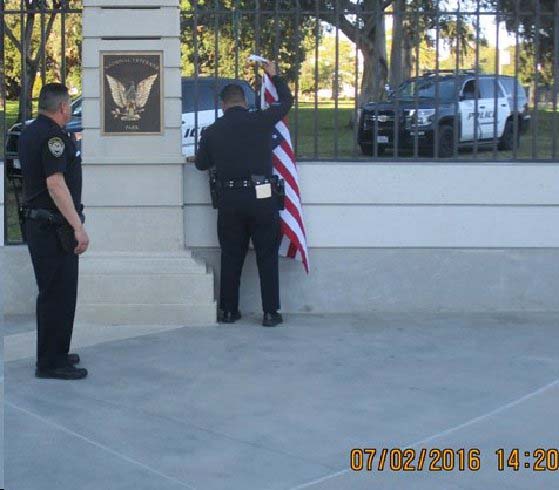 Officer Perez removing the American Flag as “evidence” for Old Glory being a “placard.” 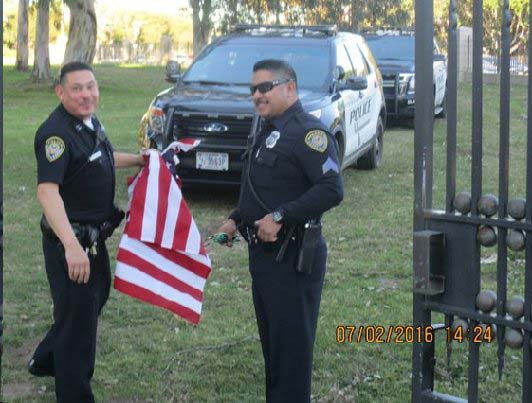 Officer Perez cowardly seizing a 3 inch by 5 inch American Flag as evidence for being a “placard” and then confiscating a three foot by five foot American Flag on another occasion with the assistance of officer Morales.

The anti-American Flag, crime, corruption and police brutality at the Los Angeles VA is out-of-control and it must cease, posthaste.

Each and every VA police officer who has issued an illegal citation and confiscated the American Flag under the color of law and false duress must be fired immediately and prosecuted accordingly, along with their superiors, including but not necessarily limited to: VA secretary Robert A. McDonald, special assistant to the secretary, Vincent Kane, Los Angeles VA executive director Ann R. Brown, her minions Susan Shyska, William Daniels, Theresa Dimaggio, Charles Green, Charles Lesa, Andres Centeno, Kathy Treadwell, Dennis Troy, et al.

“I Pledge Allegiance to the Flag of the United States of America, and to The Republic for which It Stands, One Nation, Under God, Indivisible, with Liberty and Justice for All.”