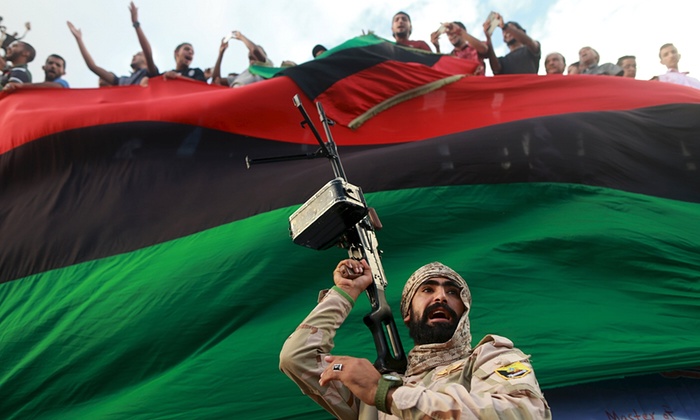 [ Note: Obama admitted the obvious last month, that he should have given more thought to the aftermath of a post Gaddafi Libya. Duuuhhhh….yeah!!! But that was some symbolic play-acting going on. It was also a failure of the Pentagon planners, the State Department and our European allies.

At a minimum, an international force should have secured all of the known weapons storage facilities to keep the cork in that bottle. Once all the various tribal groups had jumped on those, it was a foregone conclusion as to what the losers in future leadership votes would resort to… declaring their own autonomous zones, especially where the oil sources and facilities were.

From an economic standpoint, there was plenty of wealth in the country for everyone to live better than most in Africa… even more without the Gaddafi family raking off the top. But as all too often happens in life, which included the post Gaddafi Libyans, a lot of people have to learn things the hard way, a lesson drilled into me by my mother.

I tried to be a good student, most of the time, but alas I too tasted the bitter fruit of learning the hard way, and joined the ranks of senior citizens advising the young not to go that route, and that work continues daily here at VT. ]

“I am not going to leave this land. I will die as a martyr at the end. I shall remain, defiant. Muammar is Leader of the Revolution until the end of time.” – Muammar al-Gaddafi, address to the nation (22 February 2011) 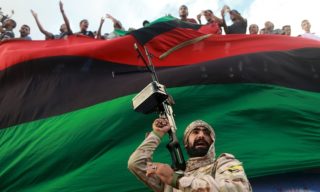 This past month has seen a strange turn of events that no one saw coming. Factional fighting was put on hold to focus on routing ISIS out of the country, which so far has been successful. Libyans went through a nasty war to get rid of Gaddafi but then threw that all away through the tribal and oil control wars that sprang up almost instantly.

A country which could have had a dream economic base for the size of its population watched as its oil production went down and down…where all became losers in the post-Gaddafi era. The million barrels a day oil cash flow is down to 360,000, and at the current lower prices versus the good old days.

The Misrata brigade is a key faction in the fighting, where its 100+ dead and 500 wounded have overwhelmed its hospital staff, many of whom had already left the city due to unpaid wages. The seriously wounded are being shipped out to neighboring countries for treatment.

The new Government of National Accord in Tripoli, the GNA, has fielded a group of Western militias aligned with the forces guarding the oil installations. They have coordinated an East-West envelopment of ISIS’s last main base in Sirte, Gaddafi’s home town, or I should say what is left of it after heavy fighting during their civil war.

ISIS lost its base at Derna, in north-east Libya, to local forces last year, and in February its western Sabratha base was destroyed by militias and US airstrikes, leaving Sirte as its last remaining stronghold.

This one-month campaign has taken Sirte’s port and airbase during the last week, and forces claim to have the ISIS jihadis surrounded in a central downtown pocket. Credit for the speedy advance is being given to the British and US Special Forces, who have provided battlefield Intel and training.

On May 12th the commander of Misrata’s Third Force reported that a British Special Forces security team took out with a very big bang an ISIS truck bomber approaching a bridge on the way to Misrata, saving many civilian lives.

The estimates of ISIS fighters in Libya have ranged from 3000 to 6000, which means nobody really knows, as irregular units are hard to count, especially in a widespread and fluid theatre.

The situation also serves as a gold-plated example of how greed and tribal competition can render a former well-off county like Libya easy pickings for what is really a small ISIS force that has created such mayhem in Libya. When all is said and done, there is a chance that ISIS may have united the country against it and knocked some sense into the heads of the various factions.

And as is so often the case of leaders remaining in the rear, that is so with the Misrata military, where former minister of martyrs Abdel-Rahman al-Kissa was killed while attacking ISIS jihadis inside Sirte. While the three-pronged attacked has bottled up the ISIS forces in the city center, predictions on June 9th of an imminent victory turned out to be premature, as is so often the case.

ISIS has counterattacked Libyan advances on their center city position in Sirte while launching suicide truck bombers against the Misrata militia’s rear, including a field hospital 30 miles outside the city, with three killed and seven wounded. Two other suicide bombings inside Sirte did not report casualties.

ISIS is nothing if not a well-trained street fighting force. It had a lot of time to mine the approaches of its defensive positions and has made deadly use of its snipers. That said, there is a growing realization that the US intel reports of 6000 jihadis in Sirte now seem to have been over estimated, some reporting as low as 700.

The best thing about the battle, unlike so many others we have seen where the goal has been to push the jihadis out of the city so as to reduce the attackers’ casualties, ISIS then lives to fight another day and another place. The Libyans seem to have enough troops to grind them down in an attrition fight, where the Misratans have airpower at their disposal, but only limited artillery.

Some Libyans fear that many of the ISIS forces have escaped into the desert, leaving behind a sacrificial force to bloody the attacking Libyans and then have those who escaped initiate a bombing campaign, further destabilizing the country.

We saw this recently in Syria, when after being pushed out of Latakia province, ISIS unleashed a major one day bombing campaign on two of Latakia’s cities, even mixing a suicide bomber in with rescuers taking wounded into a hospital to blow up the medical staff.

The national political situation is still up in the air. The Tobruk war lord, Khalifa Haftar, has sat out the Sirte fighting, enjoying having his Libyan political competition bleed losses while hopefully finishing off ISIS. Haftar has Egyptian support at his back, which wants Haftar to guarantee a quiet Western border for Egypt while it battles ISIS in its eastern Sinai desert.

But Haftar’s fence-sitting may cost him prestige in Europe and in the UN Security Council, which recently passed an arms embargo on Libya. An EU naval force will now be boarding and searching ships heading to Libya, particularly those areas not under GNA control.

Unsaid in the new blockade is that the EU will be able to better block the immigration traffic coming through Libya, which has been a major gateway, especially those heading for Italy. It would expand the EU’s ongoing Operation Sophia, which is already fighting the migrant smugglers.

The new UN-backed GNA could find itself in good graces with the UN, where its army could be rewarded with more modern arms and military training to maintain better control over jihadis, many of them infiltrating from outside the country, religious mercenaries only, and to whom no quarter must be given.

While the GNA is called a unity government there still remains substantial political opposition. It will have to be invited inside the tent to give those factions a stake hold in Libya’s future they will want to protect. The GNA must be magnanimous in victory to really change the destructive political dynamic that is swallowing Libya.

Fayez al-Sarraj, the GNA’s designee Prime minister was quick to portray the recent gains against ISIS as a model for others to follow, “a national initiative to fight terrorism.” We hope and pray that it is, as Libya has bled enough into these ancient sands.