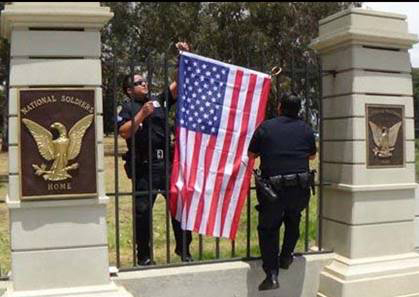 LOS ANGELES – On March 9, 2008, the peaceful and non-violent “Veterans Revolution” was established to bring an end to the rampant crime, corruption and misappropriation of Veterans property at the Los Angeles VA, and to stop the abuse and inhumane treatment of our fellow Veterans who are war-injured, impoverished and forced to live homeless and hungry at skid row or in back-alley squalor.

On that same date, Nathaniel Webb, a VA police officer, expressly stated to me that our group would be prohibited from hanging any signs, placards or flags from the VA fence or on VA property. On the other hand, officer Webb explained specifically that we could hang “flags of the United States of America or Prisoner of War.”

This was confirmed by Jim Duvall, a Senior Manager for the Public Affairs Department of the Los Angeles VA

Additionally, Mr. Duvall instructed officer Webb “to let our group be on that area of the VA property that was designated at the intersection of Wilshire and San Vicente Boulevards, but to prohibit our group from hanging any signs or placards on VA fence line, and Mr. Duvall reaffirmed: “The only exception[s] to the prohibition were the flag of the United States of America and the POW flag,” and this was further confirmed by then VA chief of police Ronald Mathis.

Thus, it was clearly established from day one that the open-plaza area outside the VA where we peacefully assembled was clearly designated as a free speech area but we could not hang any signs or placards on said fence, with the exception being we could hang “flags of the United States of America or Prisoner of War.”

Correspondingly, the Old Veterans Guard honored the VA’s policy and it was through our U.S. Constitutional First Amendment Right to demonstrate and display the American Flag that our Sunday Rallies led to two Federal Judgments against the VA; one in 2011 for violating our Constitutional Right to Free Speech and another in 2013 for exposing nine VA real estate deals that were adjudicated in Federal Court to be “unauthorized by law and therefore void.

Instead of honoring the Federal Judgment entered against the VA’s unlawful land-use scams, newly appointed VA Secretary Robert A. McDonald met secretly behind closed doors with two of his wealthy and powerful friends – attorneys Bobby Shriver and Ron Olson, neither are Veterans – to fraudulently vacate the hard-fought and long-sought Federal Judgment as they falsely promised to end Veteran homelessness in Los Angeles by the end of 2015.

This so-called settlement arrangement is a counterfeit and fraud as Los Angeles is still our nation’s capital for homeless Veterans and the illegal, non-Veteran occupants are still on Federal VA property.

Consequently, the Old Veteran Guard continued with our Sunday Rallies and our Mission to end the out-of-control crime, corruption and land-fraud of Veterans property and to stop the criminal abuse and inhumane treatment of disabled, disadvantaged and homeless Veterans. 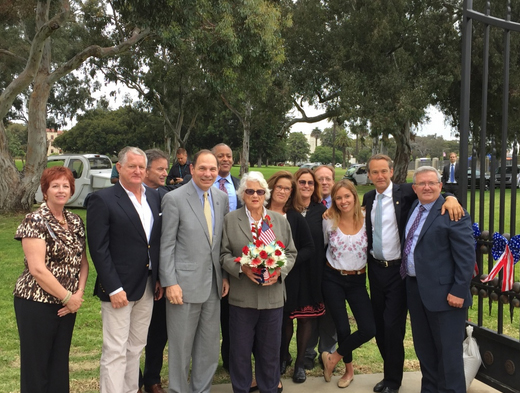 On June 4, 2015, Mr. McDonald met privately with a few more of his wealthy and powerful cronies fellow bureaucrats to officially open the front gates of the “National Veterans Park” to the general public, which expanded the designated free speech area.

For nearly six months and without incident, the Old Veterans Guard hung the American Flag on the VA’s outside fence adjacent to the newly opened front gates.

On October 25, 2015, without just cause or reason, armed VA police officer James Brinkman intervened our Sunday Rally and ordered us to remove the American Flags we had displayed on the front fence or be issued a criminal arrest citation and our Flags confiscated.

We refused to comply with his illegal demand and he falsely cited me under VA regulation: << C.F.R. 1.218 – a) (9) Distribution of handbills. The distributing of materials such as pamphlets, handbills, and/or flyers, and the displaying of placards or posting of materials on bulletin boards or elsewhere on property is prohibited, except as authorized by the head of the facility or designee or when such distributions or displays are conducted as part of authorized Government activities.>>

Not only was this a falsified arrest citation, but officer Brinkman illegally seized two of our American Flags.

Eight years earlier we were prohibited from hanging any signs, placards or flags from the VA fence or on VA property, but we were authorized by Senior Management, the Chief of Police and a VA police officer the right to hang “flags of the United States of America or Prisoner of War” on the front fence.

Thus, we were in full compliance with the established policy and since we were not “hanging any signs, placards or flags” — only the authorized American Flag — we do not need authorization or permission from anyone to do something that we are not doing. 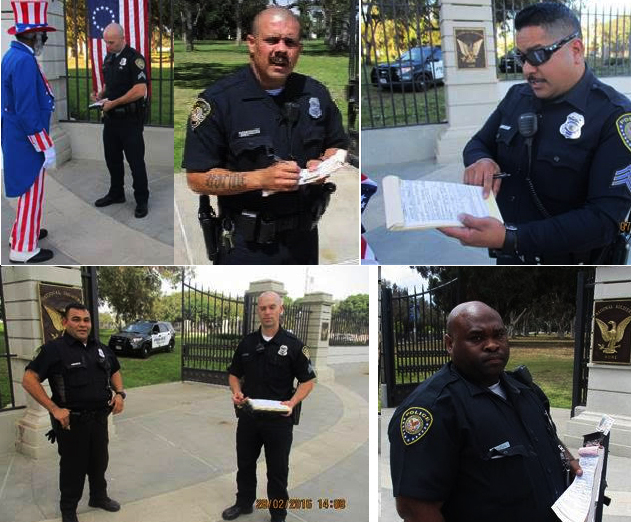 Nevertheless, a slew of armed VA police officers intervened and issued a total of 16 falsified arrest citations for displaying placards and confiscated more than 30 of our American Flags as “evidence.”

On May 18, 2016, all 16 falsified arrest citations were dismissed in Federal Court and the VA still has illegal possession of our American Flags.

Instead of honoring the Federal Court dismissals, an angered, outraged and out-of-control Robert A. McDonald and his Los Angeles executive director Ann R. Brown, retaliated against us and our Federal Court victory by ordering armed VA police officers to issue more falsified arrest citations for displaying the American Flag, to be hostile and confrontational, to use physical force in illegally confiscating our cameras while we legally photograph this illegal activity, illegally placing us in handcuffs and exerting extreme pain as unilateral punishment, and illegally ordering us off “that area of the VA property that was designated at the intersection of Wilshire and San Vicente Boulevards” where we legally assembled for more than eight years with peaceful and non-violent Sunday Rallies.

We went from freely exercising our U.S. Constitutional and Civil Rights to Peacefully Assemble and Free Speech, to government Tyranny that brought an end to American Freedom as we once knew it.

During our reign of Freedom to Assemble and Freedom of Expression, there was no presence of VA police and then an overwhelming armed VA police force intervened which caused an absence of elderly Veterans who fear these out-of-control thugs who claim they are “just following orders.”

If you think what is happening to the Old Veterans Guard and American Patriots does not apply to you, then you are not thinking properly because it does apply to you, your children and grandchildren, etc.

What has happened to us is a microcosm of the bigger picture that is happening all across America.

Wake up, stand up and speak out, otherwise be prepared for a treacherous life under a Tyrannical government.

Either fight back against government Tyranny or say goodbye to true Americanism and our taken-for-granted Freedoms that so many others sacrificed in our behalf for more than two centuries.

Take time to carefully understand the magnitude of what has happened with our cause that went from Freedom of Assembly and Speech to government Tyranny literally overnight — or since the appointment of anti-American Robert A. McDonald as Secretary of the VA.

What’s happening is real — and it’s either beautiful and joyous, or very ugly and painful.

I’ve experienced both and I choose the beautiful and joyous – Freedom!