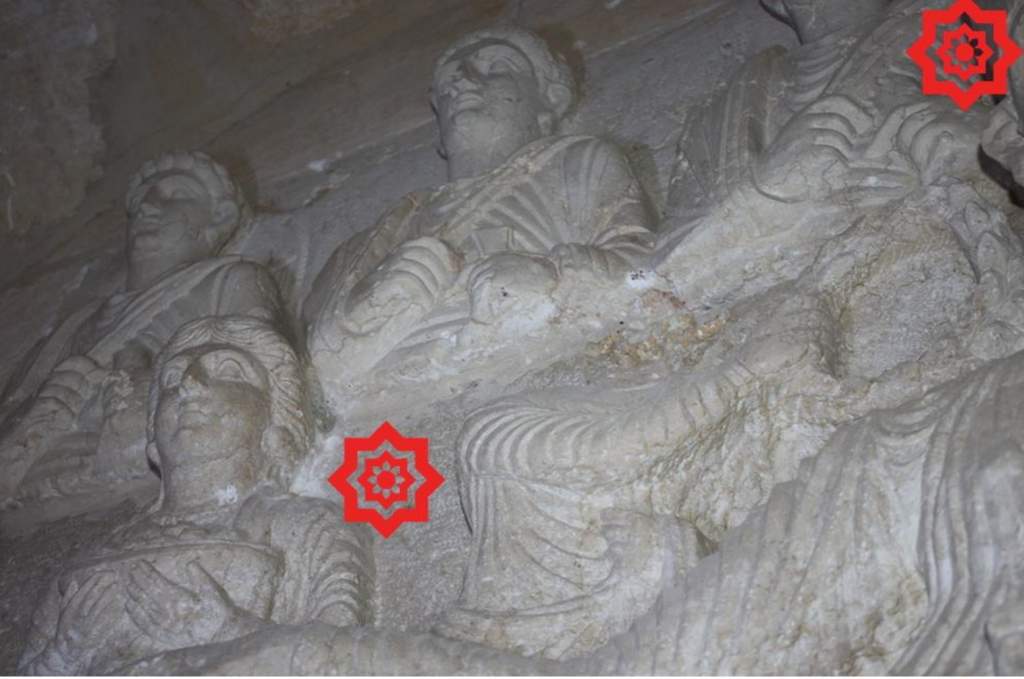 Writing by Ethar Abdul Haq at
https://en.zamanalwsl.net/news/16643.html
(Zaman Al Wasl- Exclusive)- Well-informed sources revealed to Zaman al-Wasl that secret excavation operations in the historic city of Palmyra are underway, aiming to find claimed Jewish antiquities backed by Russia which has the upper hand in the city.The sources said controversy over the nature of some activities in Palmyra following arrival of 3 unknown experts in Palmyra. They move in Palmyra in great reservation protected by Russian soldiers. They do not communicate with Syrian employees, but only communicate with Russians via an interpreter. The doubts have deepened after knowing the points on which the experts have been focusing in their tours of excavations. The excavated sites are brought up often by Israelis referring to it in their talks claiming it includes Hebrew engravings and antiquities. They could use to prove their historical presence in the region according to their common tactic in dealing with different cities.
Partnership first then monopoly

The sources start in their talk to Zaman al-Wasl from the minute the Russians came into Palmyra after they expelled ISIS. Russians hastened to spread and create a base in Palmyra’s historical sites until they established a camp and military base inside the archeological area.

In Palmyra, according to the sources, the Russian soldiers and intelligence worked for a duration with Syrian regime mercenaries and soldiers. During that period, they were partners in robbing and selling archeological artifacts according to their power and military presence; however, this partnership did not last long as Russians revealed their intentions fast. They excluded the regime and singled out power for themselves in the heart of the historical city which is considered a museum full of treasures and antiquities rare to find in the world.

Maybe the Russians singling out power for themselves explain even if late the secret behind Moscow rushing to participate in unprecedented effective force to recapture the city. Moscow plunged effective ground troops accompanied by intensive and violent air raids.

The size of losses Russians suffered on the Palmyra front can give a clear idea of the Russian rush momentum. Russians suffered the biggest loss in Palmyra since its direct and immediate intervention in the Syrian war.

Our private sources clarified the Russians fenced their camp in the heart of the historical city and banned any regime personnel or mercenaries from entering or coming close to the area under penalty and accountability.

This procedure came in tandem with arrival of 3 foreign experts who started moving between Palmyra landmarks with guards and intensive protection. They resided in the Russian camp located in camels’ racetracks and cemeteries extendıng to the theater and Bel Temple.

The sources said the experts are communicating with Russian exclusively via an interpreter. Their work is limited to mostly searching for Jewish engravings that might be a document to place Palmyra on the lıst of Jewısh cities according to what they are seeking.

The experts focus their activities, according to our sources, on the following areas: al-Naser Arch, Bel Temple, Baalshamin Temple, Diocletian camp. They performed big excavations in some of these areas aiming to reach deeper layers that have not been reached before by previous excavation missions.

Some excavations resulted in discovering a mummy and an amount of gold in the area next to al-Naser Arch according to the sources who confirmed that experts continue excavations under al-Naser Arch and in the street extending to the theater and Bel Temple. They are tirelessly searching for stone tombs that might carry Hebrew engravings.

The sources strongly indicated the deliberate destruction which al-Naser Arch, Bel Temple, and Baalshamin Temple were exposed to might have been planned to pave the way for the excavations of the unknown experts. The reason is that digging on deep layers before destruction might have damaged these sites and no party would have dared to do so before, whereas they can do that now under pretext of restoring the sites.

To shed light more on the issue, Zaman al-Wasl contacted the archeologist expert Dr. Ali Sheikhmus, the chairman of Syrian Archeological sites Protection Association. Zaman al-Wasl asked Ali if he was surprised regarding news circulating about excavations for Jewish antiquities in Palmyra. According to him as a researcher specialized in the ancient east archeology, he answered Palmyra under the regime and ISIS during the past years was exposed to robbery and excavations by all archeology thieves and from all parties and nationalities. He confirmed the Palmyra now is under absolute power of Russians and they are the ones giving permission to any sort of activity inside the city.

Regarding the possibility of Hebrew antiquities findings in Palmyra, Ali Sheikmus said all of the excavations in Palmyra and studies on it during the past century did not prove any trace on that indicating that Doura Europos which was subordinate to Palmyra Kingdom received a Jewish community which left ruins including a Synagogue. The contents of the synagogue were transported to the National Museum in Damascus.

The world interesting in protecting the Syrian archeological sites redressed stressing the identity of Palmyra is obvious and cannot be changed for a document or a simple engraving if a new excavation on deeper layers might find something describing Palmyra as an ocean that a small artifact or a group of artifacts would not change that truth.

Sheikhmus Ali pointed out the Russians who put all their force to recapture Palmyra to achieve a clear media objective and to get approval by international organizations like UNESCO, the organization protector of human heritage. The Russians looked forward to obtain the biggest part of the restoration of the city although Russians’ expertise in Syrians archeological sites is very limited compared to others. Moscow has only one lone excavation mission in Tal Khazneh over all the Syrian soil rich with archeological sites. The archeological expert concluded confirming that all activities and militarized scene in Palmyra and other archeological sites by any party is a clear violation to the principle of protection of international heritage and undermines that principle.
Rich Palmyra cannot be described as one thing.

Zaman al-Wasl asked Norwegian Professor Jorgen Christian Meyer at the University of Bergen few questions as he is one of the most important archeologists who were involved in research and studies about Palmyra. He was a prominent member in a Syrian-Norwegian excavation mission for years titled Palmyrene Project.

1. Would you be surprised if you learned that there are information about excavations to explore Jewish antiquities in Palmyra currently?

I am not aware of any recent or former excavations in Palmyra or Tadmur that have explored Jewish antiquities as such. It would be strange indeed to have excavations at the moment in the city, where restoration of the damaged building, both modern and ancient, is more important.

2. According to your previous observations, and field experience, is there any evidence indicate to any traces of a Jewish character antiquities in Palmyra?
I am not aware of any Jewish antiquities, as the synagogue in Doura Europos, but there are some inscriptions with Jewish names. There can be no doubt that there has been a Jewish population in Palmyra, just as there were Palmyrenes settled in other parts of the Middle East, The Red Sea region, Rhodos, North Africa, Rome and even Britain. That was normal for the ancient world. People traveled a lot and very often settled far from their native place.

3. In your opinion, If it is found a Jewish or Hebrew inscriptions in Palmyra antiquities, does that will be enough to prove that it is a Jewish city?

There is also another tradition (Athanasios of Alexandria) that Zenobia should have had a Jewish descent, but this finds no support in other sources. There can be no doubt that the majority of the population in Palmyra belonged to an Aramaic speaking group, which had their origins on the Syrian dry-steppe, the badiya, and the Palmyrenes maintained close connections to the Nomadic population.

There has also been other groups in the city: Greek, Roman, Jewish and probably also people from other regions of the Middle East. Otherwise Palmyra was a multilingual (Aramaic, Greek and also some Latin and Saphaitic), multicultural (Hellenistic, Arabic, Mesopotamian) and multireligious (Mesopotamian, Arabic, Hellenistic and later also Christian and Islamic (In the Umayyad period) society. This mixture of different elements is normal for large Empires before the rise of the National state in the 19th century. You may call Palmyra Roman, because the city was part of the Roman Empire, Hellenistic, because the culture was influenced by the multicultural Hellenistic world or Palmyrene, because the majority of the population came from the Badiya. I do not like to put just one label on the city. One of the most important Hebrew newspaper addressed the Jewish engravings in Palmyra in a noticeable way and in conjunction with ISIS capture of the city in the summer of 2015. The newspaper reported Israeli fear of theft of these engravings.
The newspaper focused on what it called, “the longest Hebrew biblical engraving from the ancient times” containing hymns from the book of Deuteronomy engraved on a stony entrance photographed by one archeologist in 1933. Since then, no one has information about this stone.

To summarize what the newspaper included in it file about the engravings, Palmyra was a homeland for a big Jewish community basing that on statement written over two Jewish graves from third century B.C. found near Haifa. The writings on the graves say the buried are from Palmyra.

The newspaper reported the researcher Daniel ….. from Ben-Gurion University saying, “it is clear there was a big Jewish community there. The Jews were brought from Palmyra for burial. It was written on their stony caskets they came from there.”

The newspaper continued with placing the Jewish identity on Palmyra saying there was engraving on a house entrance in Palmyra north east of its main street surrounded by columns. This engraving contains the most important hymns from the Book of Deuteronomy.

In addition to the engraving, there are two Hebrew texts and all these three engravings were photographed in the 30s, but no one knows anything about them now according to the newspaper quoting a commentary for Professor of Jewish Studies at Pennsylvania University Tawny Holm saying frankly these missing texts represent a part of the Jewish antiquities in Palmyra.

Some try to attribute building Palmyra to King Solomon, but all their attempts were not proved and disclaimed by different archeologists and researchers.

Lastly, it is common and known for archeologists interested in Palmyra and for those who study Jewish religion that Mashnah (the oral Jewish doctrine) is reported by Rabbi Johanan Baranbaha (died in 279 saying, “happy is who sees Palmyra destroyed” and Palmyra was destroyed for real by the Romans in 273 when they invaded it. But we would not know it was a small destruction compared to what Palmyra is exposed to now by different parties unified to destroyed this phenomenal city.  (Translation by Rana Abdul)

Cindy McCain: We all knew about Epstein but we were afraid of him-them (video)