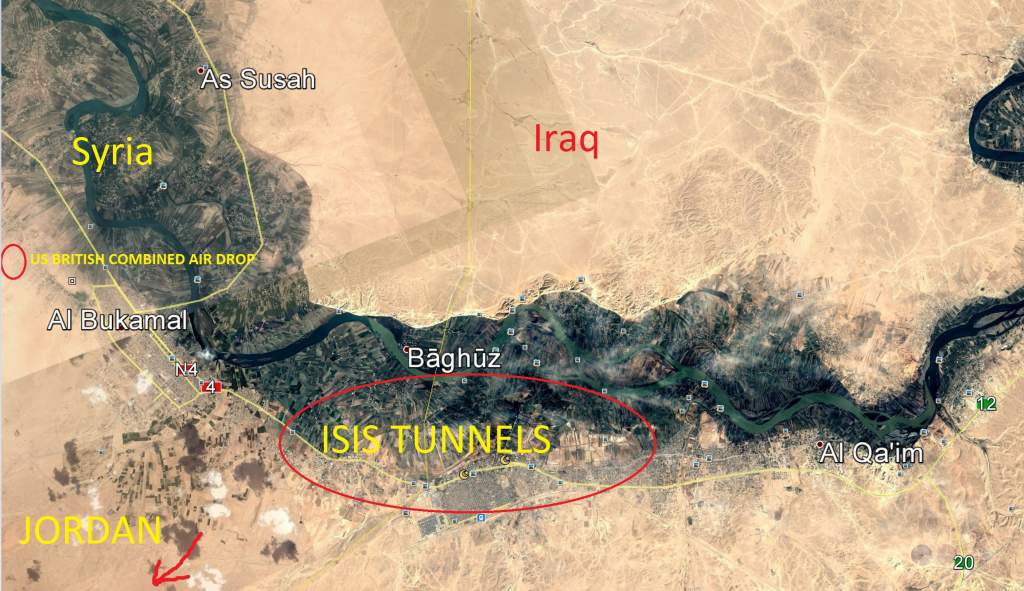 Update/Exclusive: The downed Syrian pilot is identified as Noras Hassan. He has been captured and executed by the Islam Army. Efforts to secure his release though Saudi Arabia were unsuccessful.

Two news stories today, least of which is the downing of a Syrian SU 22 by the al Islam Army, a Saudi Arabian paid force armed with American Stinger type missiles and Russian SAM 7s. Another Syrian jet was downed in Idlib ten days ago.

The second story is an American disaster, one being kept secret, a botched operation at the Iraqi/Syrian border that represents the kind of intelligence failure easily predicted when allies like Israel, Turkey, Jordan and Saudi Arabia, who all took part in the planning, are deeply invested in an American failure. We begin.

A combined US, British airborne special operation in remote Eastern Syria, at the confluence of the Euphrates River and the border with Iraq, went very wrong and will not be reported. American and British “technicians” were captured, along with Jordanian advisors and 20 survivors of the US-trained New Syrian Army, which was virtually wiped out during the botched operation.

A unit of the US-trained New Syrian Army was wiped out in an attack on an ISIS-controlled agricultural airstrip at al Bukamal, a short distance from the Iraqi border and the city of al Qa’im.

Our sources at the scene describe the operation, which began with a two-day long, 200-plus mile convoy that moved up from the CIA training center at the Syrian-Jordanian border north to attack ISIS. They were joined by American and British special operations advisors, US Army Special Forces and British SAS, who parachuted in just before the attack.

The attack, at dawn June 30, began with the New Syrian Army seizing the small airport at Bukamal, an agricultural airstrip converted to an ISIS underground command center. This was followed by an American bombing attack across a number of “targets” in the area. Then the Americans dropped leaflets advising locals to leave the area. ISIS did not leave, not hardly, they were waiting.

Before the New Syrian Army and their American, British and Jordanian advisors could consolidate, up to 400 ISIS fighters came out of tunnels that stretch all the way across the border to al Qa’im in Iraq and quickly mopped up the entire group taking as many prisoners as possible.

Along with the prisoners, ISIS seized the entire convoy of vehicles, along with radios and weapons. A deep suspicion is now being accepted at the Pentagon, that ISIS has been trained by US and British advisors, rumored to be with L3 Corporation, Dyncorp and others, over not weeks but years, under the guise of putting together a special operations combined force to protect the Gulf States. American trainers were paid $350k per year to train a force seen only twice, once during the Benghazi attack and now, as the core cadres of ISIS.

There should be no surprise at the things ISIS accomplishes, considering their best were trained to US Army Special Forces standards, with tens of millions spent. As to who was politically behind this is another story. None of the funding was American, not officially anyway. VT knows those who worked on the project, and we were not told, but had so much money thrown at us that we couldn’t easily refuse.

Since the first outing for ISIS was the Benghazi attack, with clear overtones of a combined CIA op in coordination, and our sources here are impeccable, with traitorous right wing pro-Israeli American billionaires, we can now clearly see the treasonous role the CIA is playing in Syria and Iraq and better understand the current “waffling” of Erdogan and his strong desire to get as far away from this as he can.

There is a total information crackdown on this debacle, a major American failure and a huge failure for President Obama. Everyone with information about this has been taken into custody or silenced, this is that serious.