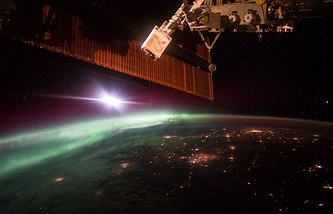 “Discussions of a possible configuration of the platform and requirements towards it elements and interfaces have begun,” she said. “Hopefully, proposals on the future program for the setting up and operation of the international habitable circumlunar platform to will be submitted to the heads of the ISS partner agencies in the first half of next year.”

Partners in the ISS project launched discussions of possible cooperation in space research beyond the low-Earth orbit in 2014 in the format of an expert workgroup. In the autumn of 2014, the heads of space agencies of the partner countries signed a plan for pondering the opportunities in remote space research created by the ISS.

“The group ponders possible scenarios for an international programme that would make it possible to trial-test all the key elements and to begin sending research missions in line with national interests of the partner countries, which include research of the circumlunar space, Mars and the asteroids,” Romanova said.

“The group has drawn a conclusion on the rationality of setting up the first international circumlunar periodically tended platform that would become the first step towards exploration of remote space,” she said.

A programme for exploration of the Moon is a strategic objective for Russian manned space missions. A descent of cosmonauts to the Moon and a subsequent laying down of a habitable lunar base there has been scheduled for the 2030’s.

The developers of the base are the Yenergiya space corporation and the Central Research Institute of Mechanical Engineering.

Sergei Krikalyov, the director for manned flights at the Russian state space corporation Roscosmos said earlier there was definite sense in establishing a permanently habituated base on the Moon and using the circumlunar platform for temporary visits, as the level of radiation there would be much higher.