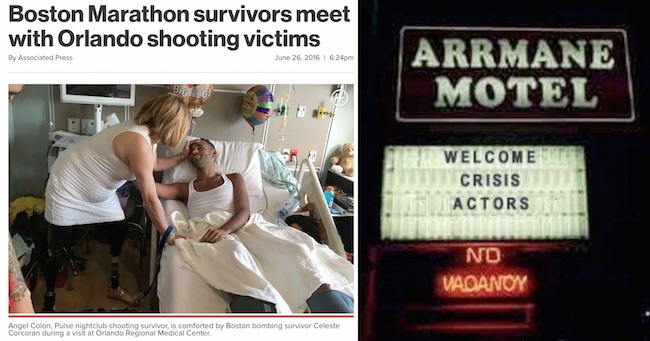 We covered several big stories exposing the Orlando false flag in this week’s False Flag Weekly News – watch it above, and click HERE for the story links.

But we missed the biggest one.

In what former CIA Clandestine Services Officer Robert David Steele argues may be an impeachable offense for Director James Comey, the FBI has ordered a complete blackout on information about the suspected false flag event.

According to the Orlando Sentinel, the FBI sent a letter to law enforcement agencies requesting “that agencies deny inquiries and directs departments to ‘immediately notify the FBI of any requests your agency received’ so ‘the FBI can seek to prevent disclosure through appropriate channels, as necessary.'”

Robert David Steele, who last week wrote to Comey demanding that he investigate and prosecute the suspected false flag in Orlando, responded:

“This is utterly outrageous. If the Florida Governor had any integrity at all he would immediately nullify this order, countermand this order, and begin an independent investigation starting with the National Guard securing the crime scene and a fresh team video-taping the entire crime scene as it stands today, releasing that to the public immediately.  All past photographs and videos of the alleged crime scene should be released to the public immediately. The integrity of FBI Director James Comey is now totally suspect — from his obligations to the Rothschilds via his well-paid indentured service as a director of the world’s oldest most corrupt bank — the Hong Kong and Shanghai Banking Corporation (Holdings) — to his refusal to indict Hillary Clinton, something Wall Street clearly does not want, James Comey has become both the most powerful — and the most compromised — person in the US Government.”

The FBI has also attempted to cover up the fact that alleged lone nut shooter Omar Mateen was a very active homosexual and frequent denizen of the Pulse nightclub. The Bureau has tried to silence witnesses, including Mateen’s ex-wife, and has issued a false report claiming that there is “no evidence” of Mateen’s gay activities, despite the abundant evidence that has been circulating throughout the global mainstream and alternative media.

Why is the FBI’s covering up Mateen’s gay identity and activities? Apparently the FBI is tasked with maintaining the “radical Muslims hate gays” propaganda blitz. The Orlando shooting was a PR stunt demonizing Muslims (those “barbaric anti-gay extremists” – watch the propaganda on Fox News and its sister outlets InfoWars and PrisonPlanet). The fact that Mateen himself was gay blows that narrative to smithereens.

But did Mateen even shoot anybody? According to FBI documents seen by Judge Andrew Napolitano, nobody died in the Pulse nightclub until the SWAT team entered, three hours after the incident began. This news potentially blows an even bigger hole in the official cover story than the revelation that Mateen was gay. No wonder the FBI is ordering a total blackout!

Here are the other Orlando-related news stories we covered in this week’s False Flag Weekly News:

New book dissects Orlando false flag: Which cover do YOU think is better?