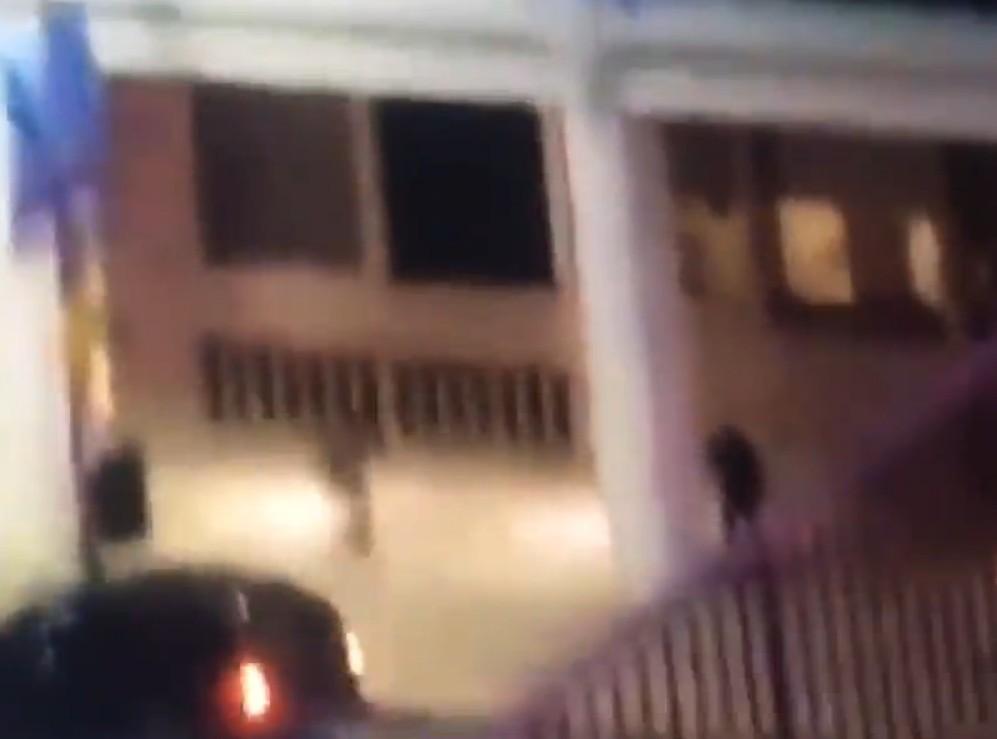 by Gordon Duff and Ian Greenhalgh

Editor’s note:  Bronfman – Mossad cheerleader Alex Jones, as predicted, is screaming for race war just as Israel wants…all to save Trump.  Read how we bust them all…slam dunk as usual…they are such amateurs.

This video is from the live Fox broadcast from Dallas where a number of police officers were shot during a Black Lives Matter protest.

Be forewarned, this video is graphic and shows the death of a police officer, discretion is advised.

We see a man in beige slacks toting an assault rifle, exchanging fire with a police officer, then he outflanks the officer, approaching from the opposite side of a pillar and shoots the officer at point blank range, the bullet passing clean through both the officer’s torso and his body armour.

Several thoughts spring to mind, firstly, what were people doing up on top of a building conveniently overlooking the scene of the crime? All too convenient. Secondly, unlike Charlie Hebdo and the farcical ‘murder’ of a French cop with obvious blanks, here we see a real weapon with real muzzle blast firing bullets that were all too real. That cop died, and he did so in a brutal fashion, he was executed in front of the watching cameras.

This whole thing reeks of psyop and we’re calling it right away – it’s a false flag, an all too obvious one.

Once again we are presented with a narrative that is quite implausible, where we are being asked to believe that the attackers were capable of feats of marksmanship that even seasoned spec ops operators would find difficult. This time we are being asked to believe that angry young black men took up arms and shot 11 police officers from elevated positions; not likely, not hardly, such a feat requires trained and experienced sniper teams – the same kind that were employed on the Maidan in Kiev two years ago to shoot down both policemen and protesters.

Let us explain this to you, over the past few weeks Trump has made statements abrogating America’s Middle East foreign policy of the past 45 years, he unilaterally decided, off the top of his head, consulting only the handler the Mossad & organised crime supplied him with that he would personally block any Palestinian state of any kind without consultation with anyone, not congress, not NATO and certainly not the UN; but he goes even further, international law requires an end to all settlements on the West Bank – these are war crimes, Geneva Convention violations, ethnic cleansing, apartheid – a holocaust. It seems gambling boss Sheldon Adelson’s pocketbook and Trump’s secret financial woes (there’s a reason he’s keeping his taxes secret) has turned from  buffoonery into mayhem that has now played out on the streets of Dallas.

This is a last ditch attempt to stop Trump melting down by his friends in the Khazarian Mafia.

We have a black president, a congress with 12% approval ratings, a failed Israeli-financed lynching of Hilary Clinton and a Republican Party in a hopeless shambles. The Catholics have fled, the upper middle-class has fled, the agricultural base has fled, Trump is building a coalition of 98% white, underemployed and disaffected’ with that we add a rapidly dwindling number of those who admired his ‘gutsy’ and outspoken approach.

Much of the press has fled from him and we know this press is Israeli controlled and anyone who claims they don’t know that is insane! So what does this tell us? The ‘Mossad’ or someone representing the rogue CIA, Israel’s Likudists who obviously aren’t being backed by the mainstream Israeli controlled press, are not any longer – they’ve gone that far.

Aided by Adelson & Saudi cash, supported by the drug cartels that own five members of the Supreme Court and stand behind the GOP…

Let’s take a second to talk police. The families of the slain officers have our full support & sympathies, however there is nothing innocent about the police. Since the 9-11 debacle, and let’s be clear it wasn’t PNAC that laid the plans for 9-11, it began with the Federalist Society; it’s all been about organised crime taking control of the US government and the blue gang is the biggest organised crime operation in the US.

It used to be that only the drug cartels ran the police departments, then the police became the enforcers for the banks. After the 2000 ‘election’ – and there was no election in 2000, the Bush gangsters dismembered the Constitution, erased Posse Commitatus and declared martial law, none of this would have been possible without militarising the police and systematically sending every police official at every level across the entire country to Israel. None of them should have ever been let back in the country. Who do you think ordered dozens of police departments to start gunning down unarmed black citizens randomly, and to what purpose? Who gains? Try blaming Obama and Hilary Clinton for this.

By 2005, Israel controlled not just the press, not just the White House, not just the Supreme Court, not just Congress, not just the Pentagon, not just the Federal Reserve, they controlled state legislatures. Adelson bought governor after governor, state, county, city, even townships, even school districts, this is the why of the Federalist Society. Look into the Potomac Institute, the Jamestown Foundation, the Heritage Foundation, the American Enterprise Institute, the US Chamber of Commerce and of course, the Federalist Society; this is the real Bilderburg/Illuminati, operating in plain sight across the US a fully militarised 800,000 man police force under the control of the Department of Homeland Security – from the outset and to this day, Israeli-controlled, threatens the lives and properties of all Americans, regardless of creed or colour. Nothing that went on in Dallas wasn’t part of their work; just another op, another Charlie Hebdo.

Something to note, look for the helmets, tanks and machine guns that came out when the Occupy Wall Street protesters were crushed?

Did Dallas misplace their DOD arsenal?