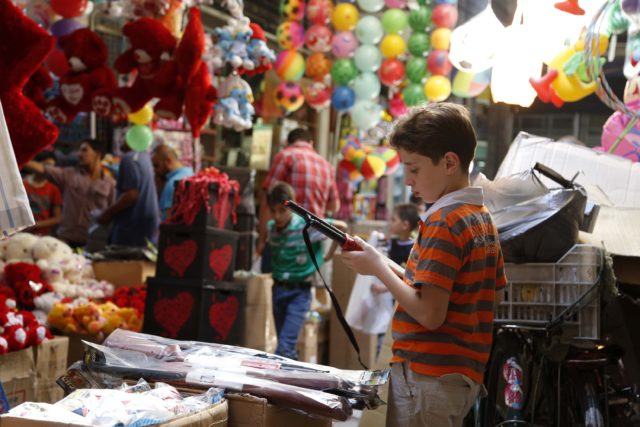 Syria with all Arab and Muslim countries celebrate Eid al-Fitr. Muslims, Shi’ites and Sunni, after completing 30 day of fasting and worship, today they aligned together in mosques to perform Eid Fitr prayers and praise and thanks Almighty God (Allah )!

The syrian President, Bashar Alasad, as usual attended Eid Fitr prayer in Al-Safa mosque in Homs city along with Syrians from all Muslim sects despite the war that that ravaged the country for more than five years.

Unfortunately terrorists from Nusra Front and ISIS  .. According to News reports, attacked worshipers in Al-Mashhad mosque, Nobel and Al-Zahra led to the martyrdom of three, including two children, and more than 30 wounded.

Nusra Front had a program of suicide-bombing throughout the month of Ramadan, and on this basis a suicide Wahhabi was recruited (according to our own sources) for carrying out suicide-bombing in Al-Hadher mosque, but his fear of failureof the operation prevented him from doing so.

It must be pointed out that terrorists in Aleppo city suffered significant losses in their attempts to attack the Syrian Arab Army.

The newly released documents suggest that in the Quds day for this year 100 thousand Websites and data Centers affiliated to the Zionist have been taken out of service. Experts say that this is one of the largest organized attacks against Zionist Regime. Hackers calling themselves Ansar al-Quds have shown documents about taking servers and Israeli websites out of service in a number of websites, links of these sites are listed at the end of this report. Since years, we have seen such as large-scale attacks from Hackers around the world in Quds Day, but in the recent years, several hundreds of websites have been under attack. In this time, the number of these attacks is much higher than ever. The following links confirms the validity of this claim: