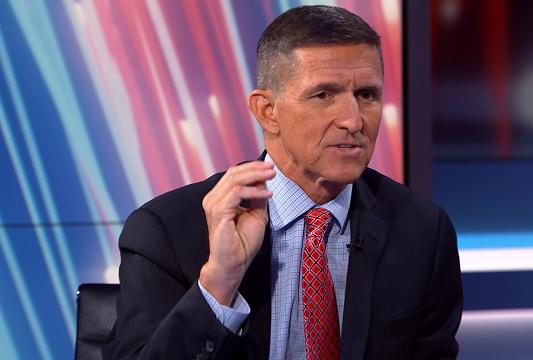 Obama’s former head of the Defense Intelligence Agency (stupidest agency in history), Lt. Gen. Michael Flynn, who was pushed out of the administration after raising the alarm on the spread of the Daesh terror network is Trump’s top pick.

Billionaire reality television superstar and real estate mogul turned Republican Presidential nominee Donald Trump has conservatives inside the Beltway sweating this weekend as leaks from inside the campaign suggest that the candidate will select Lt. General Michael Flynn, a lifelong Democrat, as his running mate against former Secretary of State Hillary Clinton.

The unconventional choice appears to fit the candidate who has rebuffed convention throughout his meteoric rise to the Republican nomination and subsequent downfall in the polls after being lambasted by the media for weeks over racially charged remarks and social media posts.

The candidate who once said that “the city of Belgium is a hell hole” has been scouting current and former elected officials for months in hopes of finding the right fit for his administration with many political pundits all but assuming that he would select former Speaker of the House Newt Gingrich for the “gravitas” and policy insights that voters believe he is lacking.

Of course, Lt. Gen. Michael Flynn would immediately infuse a Trump ticket with foreign policy experience and a track record of foresight that could quickly undermine Hillary Clinton’s primary strength – that although many people do not trust her, they believe she is competent enough.

‘Police Purge’: FBI Warns of Plots to Hunt Down and Kill All Cops

Donald Trump appears to be set on the choice of Flynn as his running mate despite grievous objections by his advisers who worry that by adding a lifelong Democrat to his ticket, the candidate risks alienating the entire conservative and Evangelical Christian base that he will desperately need in November.

The candidate and the Lt. General have a long standing relationship, however, with Flynn serving as the campaign’s chief foreign policy adviser with Trump reportedly liking the idea of a businessman and a general coming to Washington to stick it to the outsiders.

Unlike Hillary Clinton, Michael Flynn not only foresaw the rise of Daesh describing intricately in a report ignored by President Obama and the State Department that the conditions were ripe for a fundamentalist Islamic terror group worse and more hardline than al-Qaeda to emerge from the group of US-backed rebels. Flynn routinely opposed the Obama administration’s policy of arming rebel groups against Bashar al-Assad and ominously warned that ousting Gadhafi in Libya would open Pandora’s box.

Lt. Gen. Michael Flynn also has a much more optimistic view of Russia’s potential relationship with the United States, much like his counterpart Donald Trump, calling on the two sides to join forces in the Middle East to bring about peace and stability while advocating for the US to take steps to deescalate tensions along Russia’s western border.

Although an unconventional pick as a self-proclaimed liberal, Michael Flynn has been a regular guest of conservative television and radio shows – as well as a welcome guest several times on RT including on the ten-year anniversary show – which suggests that his own personal brand may be sufficiently well-known and appreciated for rank-and-file Republicans to ultimately accept him as one of their own.