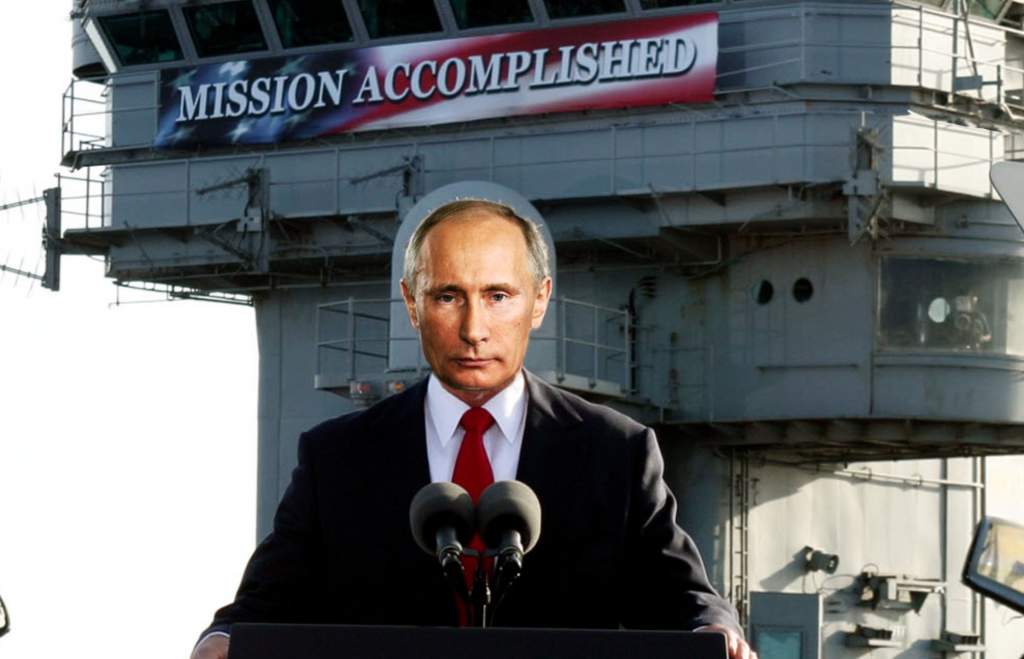 Pulling out of Syria, partially at least, in March was a blunder.  Putin was played by the West, by Turkey and Israel, by Jordan and Saudi Arabia, that flooded fresh jihadists and advanced American weapon systems into Syria.  Now Russia has paid a price, losing a helicopter and two crewmen to an advanced American weapons system delivered to ISIS by Saudi Arabia and Jordan in direct violation of American law.

No one in America says anything and even Putin himself will not respond to the real culprits.  Do we then wonder why the Syrian people, who love Putin as a father, feel shame and disappointment at his seeming cowardice?

With oil prices partially rebounded and Russia feeling a modicum of economic stability from “soft war” sanctions by the EU and US, does Putin realize he is sacrificing his leverage when he chooses to believe those he has to know are serial liars?

There is another suspicion out there, that the big fear is that this war will end.  You see, the sacrifices of the Syrian and Iraqi people, which can’t go on forever, have created a stalemate that has channeled international confrontations between the warring criminal gangs of the West and the hapless people of the world into an area where the fighting, by some estimations, can go on for generations.

This is believed, this is what is playing out and this is utter insanity.

And so it goes

Russian medium bombers are negotiating themselves across Iran and Iraq, hitting targets inside Syria today.  They are there because needed Russian assets were pulled out months ago in a fiasco that reminded many of George W. Bush’s humiliating “Mission Accomplished” speech.

It was May 1, 2013 when draft dodging fratboy chosen but unelected George W. Bush, wearing a flight jacket, playing the “fighter jock” thanked himself for winning the war in Iraq which is now alive and ongoing 13 years later.

With the uproar in Britain over more and more disclosures over the lack of prosecutions for the illegal attack on Iraq, neither Bush nor Blair will be imprisoned as required, the analogy of Putin as Bush is ironic, perhaps absurd, but is it really?

No sane person would accuse Putin of being Bush.  No one doubts Putin could have Bush pissing his pants in seconds in a face to face encounter.  America paid a painful price, a full surveillance police state set up at home, an economic collapse that has now lasted nearly a decade, America’s military bankrupted, worn down and disheartened, beyond even levels of Vietnam.

Is Russia’s fear of another Afghanistan legitimate?  Should Russia build a new coalition, pulling in India and China, their vast military manpower untested for many years?

What we know is this, the Syrian people are at an end.  We know Syria.  This has to stop even if it requires a nuclear confrontation with Israel and their Saudi puppets, the real power behind ISIS, and Putin rounding up the Zionist hordes that fill the clubs and brothels of Moscow.

Time we stopped lying and playing games.  Time we put a face on the enemy.  Killing off the Syrian people has already killed the European Union.  The current meltdown in Sudan is just a sideline, when Africa finally explodes, the world isn’t going to be able to ignore anymore.

Anyone who doesn’t see the hand of Israel in the burgeoning American race war is blind as well.  When America blows up, and it is heading that way, it won’t be a race war.  The mainstream media, failed student interns and paid conspiracy bloggers, doesn’t run America anymore.

The killing will start but when it does, there may well be sides few imagined, police, Wall Street, the banks, oil and defense on one side and several million highly motivated Americans of all colors, mostly white, a million of them military trained, angry and enraged at the life they and so many other Americans have been consigned to, one of fear and hopelessness, on the other.

The theatrically televised and contrived bloodlust spectacles of ISIS will be child’s play in comparison, the anger level in America is not to be underestimated.  There is rage here but those who think they can control is will be the first targets, mark my words.

The Syrian bloodbath everyone is enjoying so much may well spread around the world.  People can take only so much and playing war as a George W. Bush spectator sport isn’t going to work anymore, not hardly.