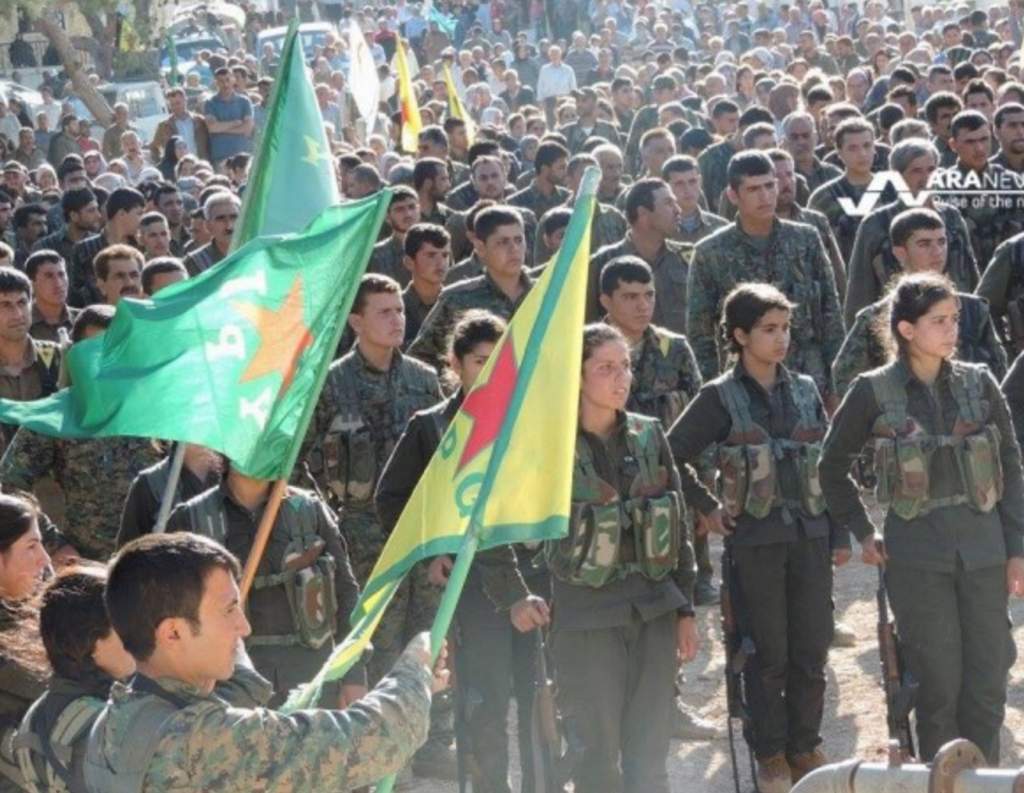 Kurdish fighters from the YPG and YPJ bidding farewell to a comrade killed during clashes with jihadists in Aleppo countryside. Photo: ARA News

HASAKAH – Western analysts say that it is unlikely that the Obama administration will change its policy towards Syrian Kurds, after an internal memo was signed by more than 50 State Department officials criticizing Obama administration’s policy in Syria and towards the Kurdish YPG forces.

The memo said that “Kurdish  YPG fighters cannot – and should not – be expected to project power and hold terrain deep into non-Kurdish areas”. Moreover, the memo says the best way to fight ISIS, is to support the moderate Sunni Arab opposition both against ISIS and the Syrian government.

Although many US diplomats disagree with the policy towards the YPG, it seems unlikely that the strategy of the current administration towards the YPG and the Kurdish-led Syrian Democratic Forces (SDF) is going to change.

“The US strategy is to use the SDF as a vehicle to empower Arab armed groups to take back Arab areas held by ISIS,” Nicholas Heras, a Washington-based Middle East researcher at the Centre for a New American Security, told ARA News about the SDF forces.

“The US strategy isn’t about Arabs vs. Kurds, it is about definitively destroying ISIS, and replacing it with a better, more internationally acceptable, local governing authority,” he added.

“The memo seems to ignore that the US strategy has always been about replacing ISIS on the local level with a successor authority that is reflective of the local demographic realities. It has never been, nor will it be, a strategy of imposing Kurdish armed groups on unwilling Arab populations,” Heras concluded.

Speaking to ARA News, Dov Friedman, an independent analyst and the director of Middle East Petroleum, said that the Obama administration will not change its policy in response to the memo.

“There are ongoing internal administration disagreements as to how much to support the Syrian Kurds and how much to take Turkey’s sensitivities into consideration,” Friedman said.

“But to the point about the memo: I don’t think the administration would necessarily see that recommendation as inconsistent with its own policy. It has said, and the Rojava administration has confirmed, that Kurds do not intend to rule over majority Arab areas,” he added.

“U.S. policy has differentiated between prosecuting the military campaign against ISIS and questions of future political control,” Friedman said.

Kurdish officials disagree with the memo that the YPG is a strictly Kurdish force, and say the YPG is ready to fight in any region occupied by ISIS.

Moreover, many Arabs have joined the YPG and the SDF-forces, and the Kurds have set up multi-ethnic administrations in Arab areas, and have appointed Arabs to leading positions in Hasakah, Tel Abyad and other towns.

“SDF is not a Kurdish force, it contains all the ethnic groups, and it’s not even a problem for the SDF to liberate Aleppo or Idlib,” Dr. Nasir Haji Mansour, a senior SDF official, told ARA News.