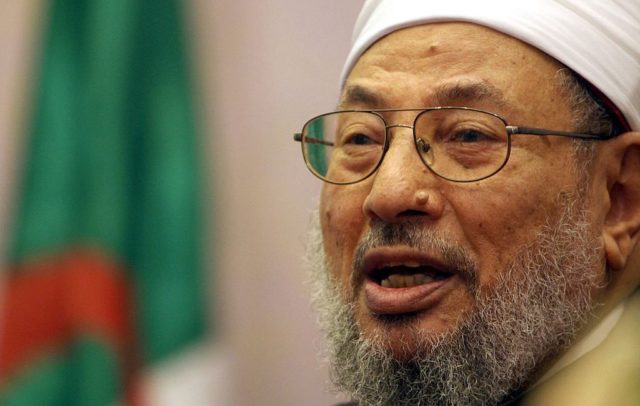 Qaradawi confirmed that the Egyptian people is living under subservience and submission to Saud Family,” while they were in earlier times “the highest peaks in various fields, including religion and politics, spreading Islam and Islamic civilization.”

Al-Azhar should not compromise with spreading the message of Islam. Saudi council of senior scholars as estinssor parrots in Al-Azhar land” are such tyrants unanimously agreed to decide our future”,   Sheikh Qaradawi added.

Qaradawi accused Saudi Arabia of coordinating with the Jews and entrusted the security of the Two Holy Mosques to the Israeli security company “G4S” in the past years. They should ask God forgiveness for killing Muslim pilgrims in Mina last year. The dream of annexing Al-Azhar to the Saudi council of senior scholars is a chimera!, and Al-Azhar will not kneel in front of traitors, and Al-Sheikh shall repent to God before it is too late to save themselves from His torment”, Qaradawi said.

It is noteworthy that Al A-Sheikh in a statement in Turki Ben Abdulllah Mosque in Riyadh demanded councils of scholars in Muslim countries such as Jordan, Algeria, Lebanon and Saudi senior scholars to change the name of Al-Azhar as the Saudi Grand Mufti Wishes.

In the name of of Allah the compassionate , the Merciful Praise be to Allah, we praise Him and seek His help , we glorify Him and ask His forgiveness! we seek refuge in Allah from the evils of ourselves and from our bad deeds. O Muslims! In the current era the Muslim nation lives in a critical juncture between humiliation and helplessness . The Egyptian people, in particular, lives in subservience and submission. Egyptians in the past were at the highest peaks in various fields, including the field of religion and Islamic Da’wah. Al-Azhar was a model of islamic organizations because in earlier times it made  its destiny alone, led separately and independently took its decisions. Al-Azhar enjoyed the power and glory in the Muslim world.

It has been a leading organization in Da’wa ( teaching of Islam) organizations and in the Muslim nation, but now things changed and winds of Complacency embarked upon, and the sun of Al-Azhar began eclipsing and now the weak became strong ( little bird became an eagle) in our land and tyrants unanimously agreed to decide our future. I mean Saudi council of senior scholars (Fatwa authority) whose concern is interfering in Muslim affairs. Now because of weakness and complacency in the leadership of Al-Azhar and the sweetness of Saudi dollars paid for some of the Al-Azhar scholars, they dare with no shame or conscience to conspire against islamic organizations to lead them, dreaming of subordinating Al-Azhar Al-Sharif to the Saudi Council of senior scholars. We tell them boldly and affirm frankly “that is a chimera”! Al-Azhar will remain independent despite what it passed through recently. This is what is happening in Egypt, the mother of the world, because those ruling the country, Selling Egyptian civilization in exchange of Saudi petrodollars. Some of Al-Azhar scholars sell our religion and honor for these dollars as well. We affirm that we will never bow before those who entrust the security of the Two Holy Mosques during pilgrimage to an Israeli security company and cooperate with the Jews. God said in Holy Qur’an Verily, you will find the strongest among men in enmity to the believers the Jews and pagans ”

Today, holding fast , all together, to the rope of God is confined to declaring your dissatisfaction from Saud family  whose hands outstretched tentacles throughout the Muslim world. O Muslims! Hold on to God and be not divided among yourselves. They built their state on the bones of the Arabs and the differences between Muslims in Yemen, Iraq and Syria. They became drinkers from the fountains of the devil. Finally, I advise them to repent to God from killing pilgrims ( Allah’s guests) during pilgrimage and in Mina scandal. Instead of plotting divisions among Muslims and suppressing light of guidance, they should repent to God the door of repentance is open. I recommend the Saudi Grand Mufti Al A-Sheikh to fear God before it is too late, the punishment of God is coming.

And Allah most certainly knows those who believe, and as certainly those who are Hypocrites. And the Unbelievers say to those who believe: “Follow our path, and we will bear (the consequences) of your faults.” Never in the least will they bear their faults: in fact they are liars!