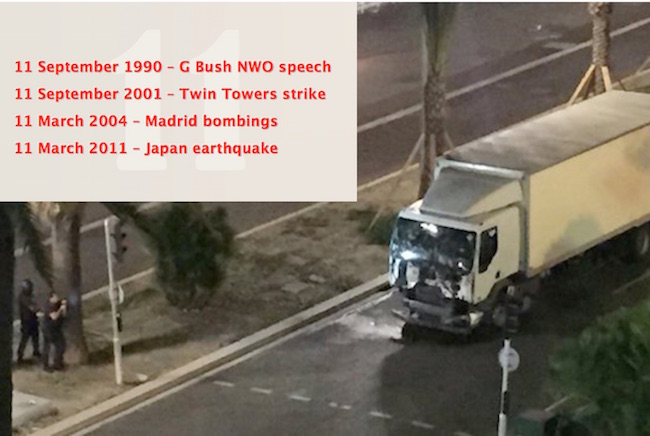 By By Kevin Barrett, VT Editor

I’m watching Fox News in the aftermath of the carnage in Nice. They’re doing the same pre-scripted propaganda show they did on 9/11, only this time it’s even further over the top : “We are at WAR with Islam! Every Muslim who believes in shariah should be deported! Send more troops to the Middle East! Obama is a WIMP!  Appeasement! Neville Chamberlain! This is war! Kill, kill, kill!”

Hannity is bringing on a parade of neocons, each one more rabid than the last. Most have no more actual terrorism expertise than “famous Fox terror expert” con man Wayne Simmons. They’re low-grade propagandists. And they don’t want to end terrorism. They’re part of the terror team themselves! Stop and think for a moment: If the neocon team behind Fox weren’t also behind the attack, they would downplay or ignore it. The “terrorists” want media coverage, OBVIOUSLY. So if you give it to them, ultra-big-time, you’re clearly part of their team. Can anyone really be stupid enough not to see that these “terror attacks” are PR stunts whose purpose is to create the hysterical “reporting” that follows? Does anyone at this point in history really not understand that the whole “war on terror” is a neocon-Zionist propaganda hoax, and that every one of these events is a false flag?

Army Intelligence Officer Capt. Eric May explained to me several years ago that the crime cabal behind the “war on terror” likes to “tag” their events with numbers, the same way gangs tag their turf with graffiti. Initiates look at the news coverage, see the magic numbers, and say to themselves “yep, our guys did that” and get with the program.

So just to refresh everyone’s memory in the wake of this latest atrocity from the Synagogue of Satan, here’s a flashback to my article:

1. The New World Order banksters introduced the Euro on 1/1 of 1999. Note that the digits “999” are not just “666” upside down, they also contain “99” which is a multiple of 11…and not just any multiple!  1/1/1999 does seem to bear an uncanny resemblance to 9/11, which a few years later became the biggest, most emotionally powerful numeric symbol in human history.

3. As mentioned earlier, the Twin Towers were obviously the Twin Pillars of Jachim and Boaz, the primordial symbols of freemasonry…which together formed a gigantic number 11.  This is probably the main source of Illuminati fascination with 11.

4. Since in the decimal system 10 represents transcendence (i.e. God), 11 one-ups transcendence. In other words, it fancies itself better than God. Hence the Satanic fascination with “going to 11.”

5. The 2004 Indian Ocean tsunami – supposedly “the deadliest tsnunami ever” – occurred on 12/26.   1+2+2+6 = 11.  An apparent NWO website offers “11 Facts About the 2004 Indian Ocean Tsunami.” Was this really a natural event? Or can seabed nukes and/or HAARP-style technologies trigger earthquakes and tsunamis?

i killed 350,000, another unnatural-looking tsunami will eventually kill millions. That, of course, would be the “Fukushima tsunami” of 3/11/11. This date not only has two big fat juicy elevens, it also bears an uncanny relationship with 9/11 and the subsequent 3/11 Madrid follow-up.  If you add up all the digits in 3/11/2011 you get “9”, and if you write the date in international style (11/3/2011) you get 11 3squared 11. Recall that in December 2010 the NWO banksters allegedly threatened to use an “earthquake weapon” on Japan if it didn’t hand them its Postal Bank, the biggest savings bank in the world. Was Fukushima the result of an undersea Israeli nuke plus stuxnet-style sabotage?

10. Construction began on the Pentagon on 9/11/1941 – exactly sixty years to the day before the big human sacrifice. Note that “Pentagon” (pentagram) is the #2 satanic/freemasonic symbol after the Twin Towers, I mean the Twin Pillars, of Jachim and Boaz. No freemason beyond the .0001th degree could possibly hear about an attack on the Twin Pillars and the Pentagram without getting the message. Note that a plane/missile describing a slightly curving flight path into a pentagram looks like a 9, just as the Twin Pillars form an 11.

11. Finally, as all VT readers know, Veterans day is 11/11, commemorating the eleventh hour on the eleventh day on the eleventh month of 1918 when the New World Order in general, and the Zionist occupation of the Holy Land in particular, began to arise from the ashes of European civilization.

*Hollande, pressured by the workers’ uprising in France, “had said on Thursday that a state of emergency put in place after the Nov. 13 attacks in and around Paris would end soon.” (NY Times). The Nice attack sent a clear message from the Deep State: DON’T EVEN THINK ABOUT IT! France, once the land of liberté, is now an Orwellian police state under permanent emergency status.

*Keith Rogers notes: “Odd that the ‘terrorists’ didn’t bother to drive 8 miles up the road to Monaco, where they would have found plenty of elites to run down!” For some reason, “ISIS” has no interest in attacking people in power, including the people responsible for the war on Islam that has killed millions of Muslims since 9/11. Nor do they attack Israelis or Zionists. Instead, they slaughter random civilians—almost all of them Muslim—and do everything they can to make Islam, and the concept of an “Islamic state” (a concept supported by a majority of Muslims worldwide) look bad. Over 95% of ISIS’s victims, probably closer to 99%, are Muslim; attacks in places like France are statistically the exception. Yet the media frames it as “Muslims attacking the West.” This does seem “odd,” Keith—until we wake up and realize that “ISIS” stands for Israeli Secret Intelligence Service.

*The trucker, conveniently shot dead, will never be able to reveal who put him up to it. How hard would it have been to disable the truck, say by shooting out the tires, and then try to capture the “terrorist” alive so he could be interrogated and his network taken down? There are ways of rendering people unconscious, or unable to fight, without killing them. For some reason, though, the authorities NEVER want to capture any “terrorists” alive.

*Barbara Honegger, one of the greatest activist-researchers in the 9/11 truth movement, writes: “The Nice truck attack happened the day that France’s state of emergency from the last attack was to have ended.  In response, Hollande extended the state of emergency for another three months. The area where the truck hit the crowd had been blocked off by police barricades, so it either got through or was allowed through.  Police reported finding firearms, explosives and grenades inside the truck, and there was an initial report that there was more than one attacker in the truck … The below are key reports from CNN’s initial coverage of the Nice attacks mentioned in the 12 (as of now — they  keep adding others) sequential video clips that come up, one after the other, at (might not be a live link; if not, copy and paste into a search engine):   http://www.cnn.com/videos/world/2016/07/15/nice-france-truck-gunshots-sot-nr.cnn/video/playlists/truck-hits-crown-in-nice-france/    Brexit is being called ‘Britain’s Independence Day’. The Nice attacks were on France’s Independence Day. Coincidence? ”

*Abu Salem Sofyan, a great source on France and North Africa, writes: “Kevin, 84 deaths now so it is 77 + 7. Remind us the Brexit was on the 23 june 2015, 7 years, 7 months, 7 days after the last shemitah the 29 september 2008  start of the last crisis.”  He says Netanyahu, Sarkozy, Estrosi, and Ciotti are the principle suspects in the Nice attack, and suspects Paris was the originally planned target—but the Israeli-linked rogue network behind all of the recent French attacks doesn’t have total control there, so they hit Nice—in a region they rule—instead: “So we assume they could not strike Paris and went to a city controlled by mossadnik Sarkozy, close to Bibi.” Maybe my article last week saved the Eiffel Tower?

*Note the comment below: “The attacker’s ID was found in the truck..” -RT.  So once again, we have terrorists conveniently supplying ID cards or passports to the authorities.

*Hitting France on Bastille Day, the anniversary of the French Revolution, seems designed to up the ante in the neocon-Zionist-fabricated “clash of civilizations.” The French Revolution, spearheaded by the Illuminati under defrocked Jesuit priest Adam Weishaupt, was designed to overthrow traditional religion-based society and institute a radically secular “New World Order.” Churches were razed and burned, priests were executed, nuns were gang-raped and killed, and a New World Order secularist pseudo-religion, which endures to this day in a less radical form, was founded. The repeated spectacular attacks on France we’ve witnessed during the past 18 months—Charlie Hebdo, Friday the 13th (a.k.a. 11/13/15) and now this—are part of a “strategy of tension” pitting the most radically secularist society on earth, Republican France, heir to the French revolution, against Islam, the most enduring world religion.

*France is also one of the most influential nations moving toward a more pro-Palestinian stance. Netanyahu threatened France throughout the second half of 2014 that if France continued to sympathize with the Palestinians “terror will come to your country.” One month after France officially recognized Palestine, Bibi made good on his threat with the Charlie Hebdo attacks of 1/7/15. The follow-up attacks on France have further stalled the French pro-Palestine movement by whipping up hatred of all things Muslim-related.

*The repeated attacks on France are also designed to terrorize France’s 500,000+ Jews—the biggest Jewish population in Europe—into fleeing to Israel. In the wake of each attack, Bibi has immediately demanded that French Jews pull up stakes and head to Tel Aviv. The real reason, of course, is not to ensure their safety—Jews are far safer in France than in Israel—but to help solve Israel’s demographic crisis.

*SITE Intelligence Group, an Israeli Mossad spin-off that functions as the public relations arm of ISIS, is wildly celebrating the attack: