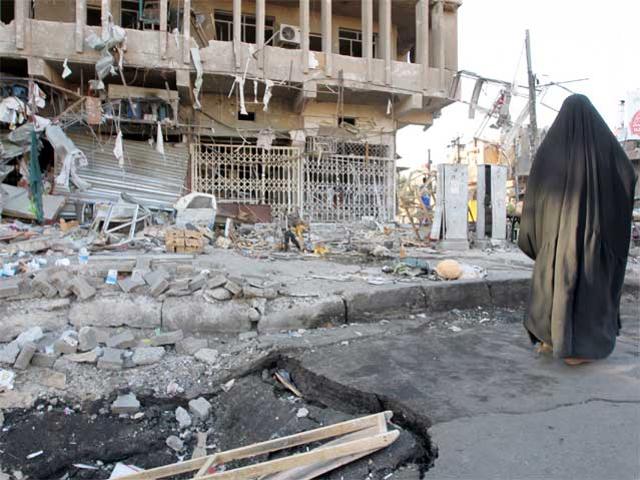 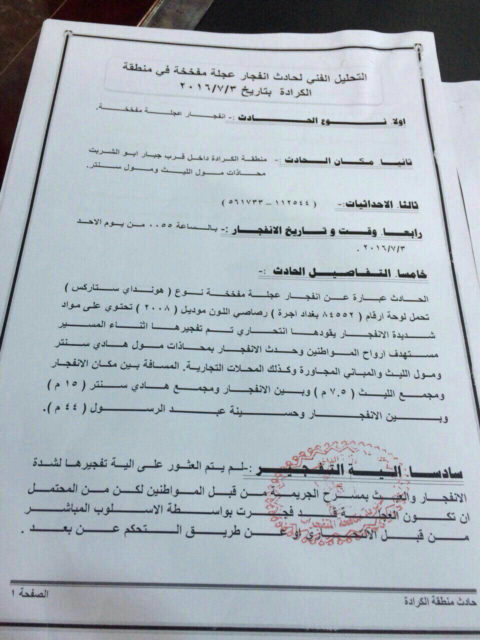 Baghdad / The issue: Numerous assumptions in the way of the bombing and in the hazardous materials that had used as long as it covered a large area of Karrada in the blast zone last Saturday.

Even though the official announcement has reported that the explosion was caused by a car bomb driven by a suicide it was not enough to end the many assumptions about the way of this explosion that caused a large area of destruction.

One of the assumptions that the explosion was caused by a tanker laden with gas arrived at the place by getting some facilities and burn it completely, but because of the intensity of the explosion, there are no traces. The death toll has risen to 250 martyrs in the suicide Karrada bombing in Baghdad which has caused many calls to the security forces to eliminate the sleeper cells of ISIS and remove all ISIS sympathizers of political leaders.

At the same time, many of those who visited the place confirmed the absence of a hole in the scene of the explosion which is a usual thing in the case of an explosion booby. This thing raises questions about other methods were used to cause this explosion.

According to another assumption, the terrorists used vehicle “refrigerator” contains a nitrogen gas and Freon and they are inflammable gases, it is a method used by terrorists in 2007 in Alsadria explosion.

Other assumptions have been published on social networking sites demonstrate the possibility of non-use of material C4 because the fire lasted from 1:00 am until 5:00 am, which is not happening in the case of an explosion this material. Also, the nature of the burns that infect victims does not indicate using it.

According to this assumption, the possibility of using this material “Napalm” is possible because of the nature of the burns that infect victims. Also, the nature of the massive explosions and physical effects and the absence of a hole in the scene of the explosion can support the use of napalm, and even uranium in the explosion.

However, the difficulty of terrorists acquiring such materials can weaken this possibility. But this large explosion creates a lot of ideas and imaginations.

To add to the diversity of possibilities, some say there is no trace of the car bombs in the place

An Iraqi citizen visited the place has said: Where are the Survivors, we did not see them in the media and what is the story of the room on the third floor of the Al-Laith apartment complex which is the only one that didn’t hurt from the fire despite knowing that the complex was burned completely, and what is the secret of the existence of weapons and equipment into it??

Other questions were raised like: Why the cameras records were “empty” even from the moments before the explosion??

The Al-Karrada area which includes a number of mosques were crowded with shoppers before of Eid al-Fitr when the explosion occurs.

Dozens gathered in front of the complex, most of them are from the families of the victims and their friends. A man named Mohammed al-Taihe said that he is sure of the existence of his relative at home because he had telephoned him and told him about his inability to get out of the building because of the flames

At the end of all these stories, it turns out that intelligence elements of a US or Israeli, and Saudi Arabia were involved in this terrorist attack were disguised before the incident.