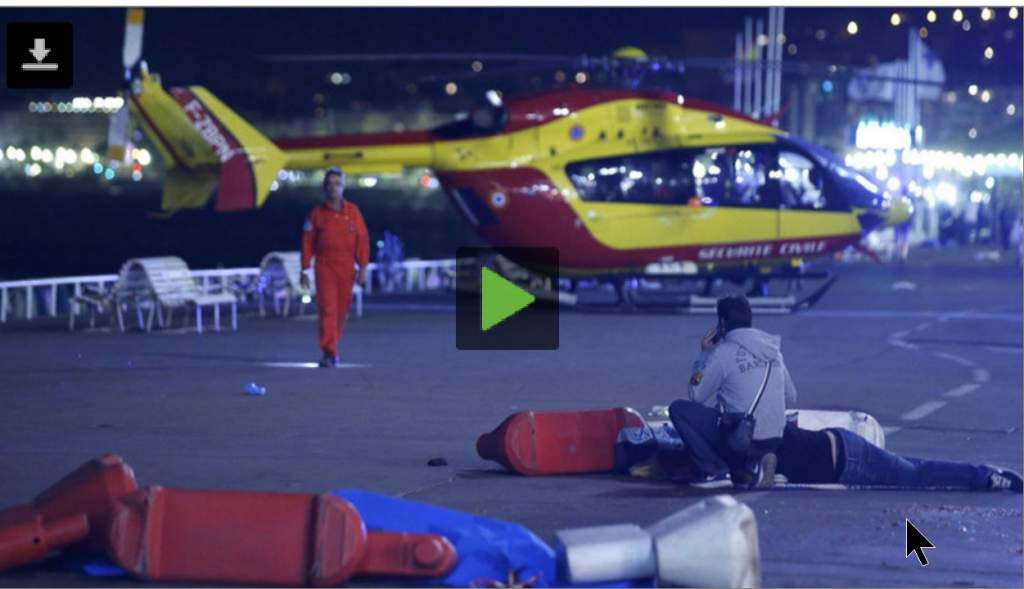 The driver of the truck that killed at least 80 people in Nice on Thursday evening was a 31-year-old resident born in Tunisia, according to French newspaper Nice Matin.

The attack occurred when the driver plowed through a crowd celebrating Bastille Day during a firework display along the city’s waterfront. He drove for more than a mile before being shot dead by police, according to French Interior Ministry spokesperson Pierre-Henry Brandet.

“Investigations are currently under way to establish if the individual acted alone or if he had accomplices who might have fled,” Brandet said.

Heavy weapons and grenades were found inside the truck. French newspaper Le Figaro reports that driver fired at the crowd as he drove.

While the terrorist group Daesh, also known as IS/ISIL, has not officially claimed responsibility for the attack, it is a likely suspect.

In the wake of the attack, Facebook activated its “safety check” feature and social media expressed grievances for the victims. French President Francois Hollande addressed the nation after holding an emergency meeting with his cabinet.

“If you are not able to find an IED or a bullet, then single out the disbelieving American, Frenchman, or any of their allies. Smash his head with a rock, or slaughter him with a knife, or run him over with your car, or throw him down from a high place, or choke him, or poison him,” Daesh spokesman Abu Muhammad al-Adnani said in 2014.

In a 2014 video, an unnamed French-speaking Daesh spokesperson gave an order saying, “There are weapons and cars available and targets ready to be hit. … Kill them and spit in their faces and run over them with your cars.”

Meanwhile, TV channel i-Tele said that the attacker was already known to law enforcement, but only for minor crimes and not in connection with terrorism. Sebastien Humbert, the perfect for the Alpes-Maritime area, detailed the circumstances of the crash, explaining the high number of casualties to BFM.

Scores of people have been killed and dozens more injured after a truck plowed through a crowd during Bastille Day celebrations in Nice, in what has been called “the worst attack” in the city’s history. A truck driver has been killed by police.

A truck rammed into the crowd over a long distance, which explains this extremely heavy toll,” he said.

BMF reported that the truck with the attacker rammed the crowd for 2 kilometers before it was stopped.

Damien Allemand, a Nice-Matin reporter who witnessed the attack, said the assailant was trying to maximize the number of casualties by moving the truck erratically.

“An enormous white truck came along at a crazy speed, turning the wheel to mow down the maximum number of people,” he wrote, adding that the victims` bodies were “flying like bowling pins along its route.”

Nice regional president Eric Ciotti confirmed to BFM that the attacker was killed “apparently after an exchange of gunfire.”

Meanwhile, the death toll has risen to over 70 people, he wrote, confirming the earlier reports.

“This is the worst drama in the history of Nice with more than 70 victims already,” he said on Twitter.

According to an eyewitness report cited by BFM, the driver of the truck shouted, “Allahu Akbar!” before the attack.

Witnesses reported that the truck that drove into the crowd was watching the fireworks celebration of Bastille Day.  Photos emerged on social media showing injured people lying on the ground en masse.

President of the Provence Alpes Cote d’Azur region Christian Estrosi said on Twitter that “dozens” of people were been killed in the incident.

Police have cordoned off Promenade des Anglais completely following the attack. Nobody is able to leave the area at the moment, Alain Marchall, the BFM correspondent at the site, reported.

“The promenade is closed, locked, as I am speaking. It is impossible to [gain] access. The police and private security have cordoned it off. We cannot move forward or go along Promenade des Anglais,” he said.

“I see residents who wonder how they can access their apartments, which is impossible at the moment.”

Prosecution have launched an investigation into cases of “murder and attempted murder in an organized group linked to a terrorist enterprise.” The anti-terrorist unit of the Paris Prosecutor`s Office is being entrusted with the investigation of the attack.

Meanwhile, Francois Hollande has extended the state of emergency, in place since November 2015, for another three months. Following the attack, France will recruit an extra 10,000 extra military police officers, Hollande says.