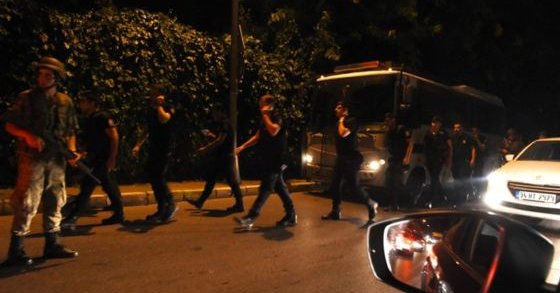 Initial reports are skimpy, but the official silence and the throttling back on social network traffic is and all the Turkish media shows something is a foot tonight. We will be watching.

“Attempt by part of muilitary’

Yildirim says “it would be wrong to call it a coup” but that there has been an attempt by “part of the military”.

He describes it as an “illegal attempt” to seize power.

Turkey would never allow any “initiative that would interrupt democracy”, he said, and promised the perpetrators “will pay the highest price”.

Binali Yildirim has called for calm.

The Bosphorus and Fatih bridges were closed by the gendarmerie – a branch of the Turkish military dedicated to internal security – for traffic travelling from Asia to Europe, NTV television said. Traffic was still moving in the other direction.

Meanwhile, Turkish military aircraft were heard flying low over Ankara, AFP correspondents in the capital also reported. There was no immediate explanation for the cause of the incidents.

Rumours that Turkey has declared martial law on Twitter

All unconfirmed at this stage.