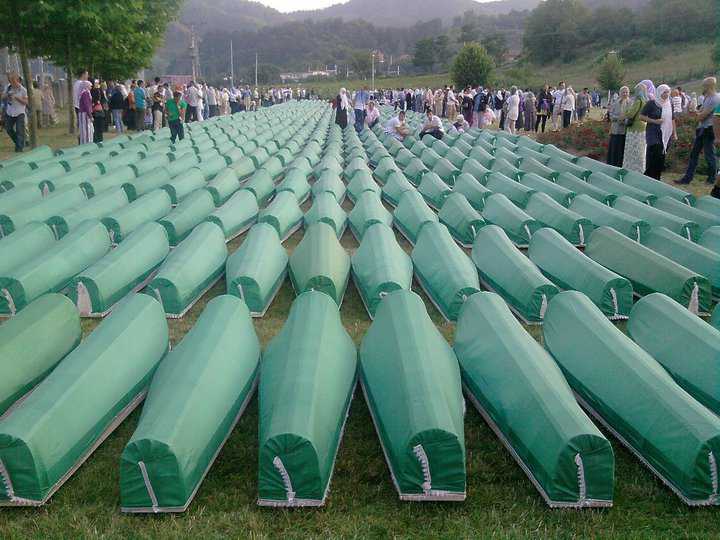 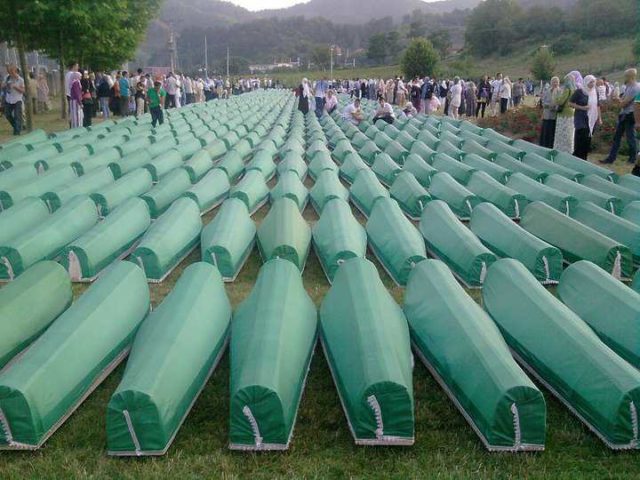 In the capital of Bosnia and Herzegovina “Sarajevo”, on Monday,buried the remains of 127 victims of the massacre “Srebrenica”, about a week after finding them in a mass grave near the town “Visoko” (center).

According to the BBC report, it comes in conjunction with the 21th anniversary solutions for the “Srebrenica” massacre that occurred during the Bosnian war in 1995 and claimed the lives of more than eight thousand Bosnian Muslims.

And one of the remains transfered on Sunday from “Visoko” city to Sarajevo; where he was buried after Dhuhur prayers in the “Potocari” cemetery.

Sarajevo wittinessed and since the early morning hours -according to the Anatolia agency- the influx of hundreds of people from the families of the victims on the cemetery, to participate in the funeral, where they took in praying for them and they shed tears to their memory.

Thousands of people who came from several countries also attended the cemetery since the morning, to share out pain with Bosnian on the anniversary of the massacre.

Among the 127 victims who were buried today, 12 people were aged less than 18 years old when they were killed and the youngest person among the victims was aged 14 years, while the age of the largest was 77 years older.

With those who were buried today the number of victims buried in the Potocari cemetery rise to 6 thousand and 504.

According to the Guardian, after the search and detection of secret documents show that after the United Nations Declaration town of Srebrenica as a safe area. The governments of the United States, Britain and France extradited to Serbia.

Serb forces stormed the town, led by Ratko Mladic in July 11, 1995,and committed mass massacre of more than eight thousand Bosnian, ranged in age from 7 to 70 years, that after handed over the Dutch forces operating there  tens of thousands of Bosnian to Serb forces.

Saudi preacher: Will stand all the Arab countries in the face of Iran!

Wahhabi preacher close associate of al-Saud Aidh Karni because pointe out that there was no evidence of Iran’s stand with opponents for some systems and the governments of the Arab countries, while the Arab countries do not support the Iranian opposition, so its a must to stand against Iran.

The Wahhabi preacher said: I have traveled to 40 countries in the world and they all assured me their suffering for Safawi state interference.For this reason, I call on all Arab countries to stand up to them and not to tolerate them.