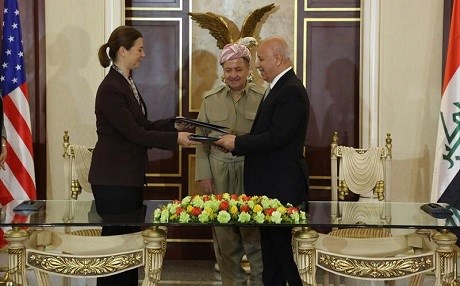 ERBIL, Kurdistan Region–After the United States signed a military memorandum of understanding with the Kurdistan Regional Government (KRG) last week, some Iraqi MPs have considered the move a violation of the sovereignty of Iraq and have asked the Iraqi government to take a stance against the deal.

“We ask the chief of armed forces PM Haider Al-Abadi to publish the protocol details and inform the representatives of the Iraqi people, as this is sensitive, related to the sovereignty of Iraq,” said Haneen Kado Shabak, MP, in a statement on Monday.

He mentioned that according to leaks Washington is planning to establish several military bases in Iraq, reported Summaria News on Monday.

Another MP, who sits on the security and defense committee, said the memorandum was signed without informing the Iraqi government and gaining its approval.

“The agreement between the US and the Kurdistan Region to provide arms, it’s a clear violation of the Iraqi constitution,” Iskander Watut told Almaalomah on July 14.

A member of the foreign relations committee said the protocol cannot be considered an official agreement but is just a memorandum between the two parties. “According to the Iraqi constitution, no agreement can be made with any state unless with the approval of the council of representatives. The military protocol between the US and the KRG is unconstitutional,” Samira Jaffar, an MP from the Shiite State of Law coalition told Sotaliraq on July 14.

Hanan al-Fatlawi, MP and head of the Irada movement, criticized the Iraqi government for being silent on the deal and she asked Abadi to provide clarification on the matter.

“We are waiting for the clarification from the Iraqi government, whether they have agreed to the military protocol or not,” she added.

Whenever the KRG acted independently in its foreign relations in the past, Iraqi officials and MPs in Baghdad were quick to react, especially on economic and military deals made without coordination with the central government.

In recent years, Baghdad has put up obstacles to international military support for Erbil. But in the memorandum with the US, the KRG can bypass Baghdad, claimed a political and military analyst.

“Through this protocol the Peshmerga can get what it needs militarily, and other rights, privileges that it did not receive from the Iraqi government in past years,” Ala’a Nshuuh told Rudaw on July 14.

“The Kurdistan Region is a target for terrorists and regional countries especially Iran, therefore the US government thought of protecting Kurdistan via this agreement” he added.

In the memorandum, the United States committed to provide more military and financial support to the Peshmerga forces on the frontlines and also to provide support for the Peshmerga in the war against the Islamic State, with particular focus on the Mosul operation.

“The memorandum makes references to military and financial support to the Peshmerga forces and also to some of the details of the Mosul operation,” according to a statement from the Kurdistan Region Presidency.

The agreement was signed by the KRG acting Minister of Peshmerga Affairs Karim Sinjari and the US acting Assistant Secretary of Defense Elissa Slotkin.