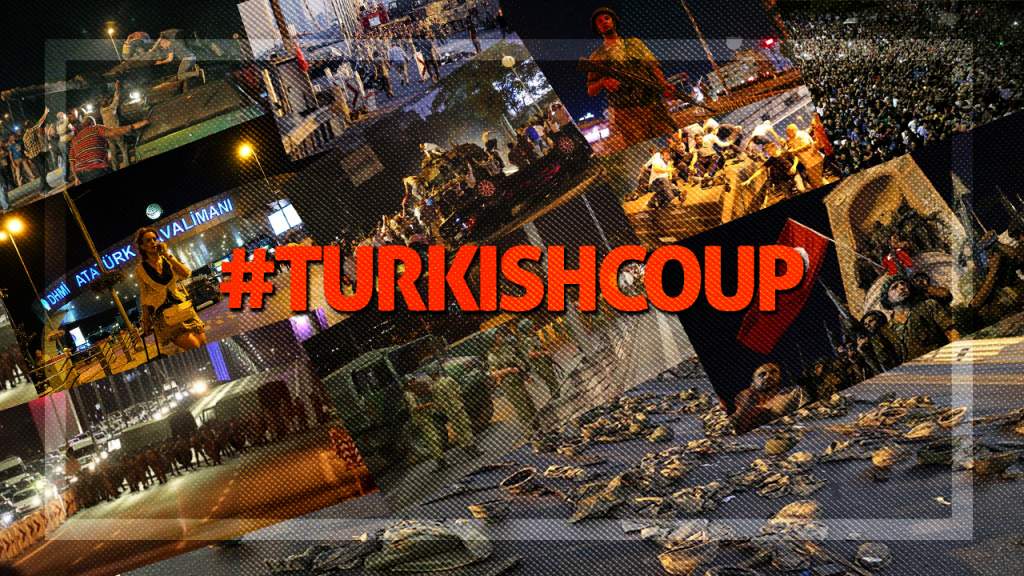 A bloody and destructive military coup attempt swept Turkey from Ankara to Istanbul overnight into last Saturday plunged the Turkish state into the crisis and leaded to limited ground and air combat in the sites seized by the coup supporters. President Recep Erdogan and his supporters were able to repel the attempt. However, the cost of their successful strategy – to use civilians as a human shield against the pro-coup military – was high. Some 290 people were killed, including over 100 putschists, and more than 1,400 injured in a chaotic night of violence. The Turkish authorities detained more than 3000 military personnel for the complicity in the coup attempt. Turkish authorities relieved 2,745 judges of duty and issued arrested 140 Constitutional Court members and 48 members of the Council of State.

Among those arrested was General Bekir Ercan Van, commander of the Incirlik air base. The base stores US tactical nuclear weapons and is being used by the US to launch airstrikes on Syria and Iraq. The former Chief of Staff of the Air Force Akin Ozturk, Colonel Muharrem Kose, 2nd Army commander Gen. Adem Huduti and the 2nd Army executive officer, Malatya Garrison Commander Avni Angun, 3rd Army commander Erdal Ozturk and many others, including a military aide to Mr Erdogan, Ali Yazici, were detained.

The coup attempt in Turkey revealed significant gaps of planning and coordination that prevented it from a success. Overnight into Saturday, the pro-coup military stationed themselves on major bridges in Istanbul and severed roads in Ankara and Izmir. Turkish F-16s were making low flyovers in Ankara. Civilians were told to go home and stay inside. The airports across the country were shut down and flights were paused. They also shut down power to some critical government infrastructure, such as Dolmabahce Palace and took control of some media and communications channels. However, YouTube, other Internet media outlets and many private channels were remaining online. Later, this allowed Erdogan to take upper hand in media while there were almost no reports, depicting the situation, from the opposing side.

Furthermore, the coup supporters were not able to infiltrate isolate and neutralize Erdogan and other representatives of the opposing political and military leadership. They also failed to successfully coordinate own operating cells and manage the remaining pro-Erdogan forces. As result, Erdogan relying on loyal special services and the police and using a human shield of supporters was able to unite the loyal forces and crush the rebellion.

President Erdogan himself laid the blame for the coup attempt on Fetullah Gulen, a US-based opposition leader who allegedly seeks the power in Turkey. In this case, experts link the coup attempt with the reaction of some pro-Western powers on Erdogan’s steps to stabilize relations with Russia and alleged will to find a consensus over Syria. US special services have a wide network of informants in Turkey and it’s hard to believe that Washington had had no information about such preparations.

The failed coup will lead to further purges in the Turkish Armed Forces. This will make it difficult for Ankara to use the military as an instrument of policy and national strategy and combat successfully its own domestic Kurdish militant movement. This will also weaken Ankara’s capabilities to influence the situation in Syria and Iraq through its military power. For example, the Kurdish People’s Protection Units (YPG) in Syria could use Turkish infighting to expand and connect Kurdish-controlled territorial pockets.