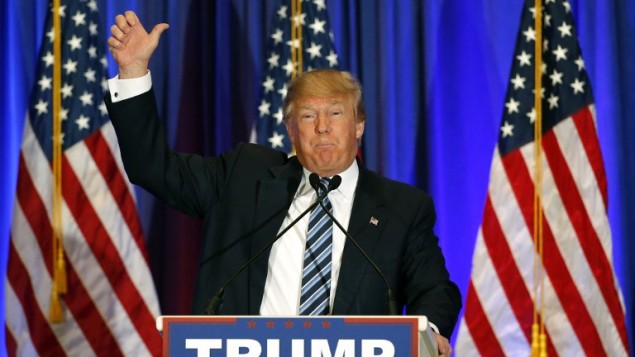 When things get too politically hectic or unpredictable, I usually turn to humor or satire to help lead me to another perspective and in the case of this year’s 2016 Presidential election ~ the Onion brilliantly delivers: Allen L Roland. PhD

With the primaries behind them, the presumptive nominees from both parties must now assess how to approach the general election. Here is how Donald Trump is strategizing his campaign moving forward (Most are the Courtesy of the Onion)

.  Continue to build on campaign of fear, intimidation and Islamophobia

.  Rope in the sheeple with a Nixonian Law and Order campaign.

Of course, I will not be choosing the lesser of two evils and will instead be voting for the good Dr. Jill Stein ~ the Green Party’s presumptive nominee for President and look forward to her presence in the Presidential debates. God help us all in November. See Stein Bio ~

Trump’s ghostwriter on “The Art of the Deal” says he feels “a deep sense of remorse.” (The New Yorker)  See must read Article By Jane Mayer

“The Art of the Deal” made America see Trump as a charmer with an unfailing knack for business. Tony Schwartz helped create that myth ~ and regrets it“: Jane Mayer, New Yorker

Author Details
Allen L Roland, PhD
{p}Allen L Roland, PhD is a Freelance Alternative Press Online columnist. He is also a heart centered spiritual consultant, author and lecturer who also shares a weekly political and social commentary on his web site at AllenRoland.com. He also guest hosts Truthtalk, a national radio show that airs monthly. He is available for comments, interviews, speaking engagements as well as private consultations via email at [email protected].{/p} {p}Roland is a twin who was born in Boston, Massachusetts, survived a dysfunctional family, pursued and lived his dreams, including becoming a Navy supersonic carrier pilot, finding himself by fully opening his heart, writing three books, siring four children ~ and is still living his ultimate dream by making a difference from a place of love, celebration and service. {/p} His Ph.D dissertation THE UNIFIED FIELD was chosen by Common Boundary and Noetic Science Institute, in their 1998 national dissertation contest, as one of the top three finalists for combining spirituality and psychology. His ongoing heart centered work as a consultant with veterans with PTSD, is the most satisfying work of his life. Allen’s online newsletter, columns and radio broadcasts are committed to the truth ~ as he sees it ~ for only the truth is revolutionary.
http://www.allenroland.com
[email protected]
ATTENTION READERS
Due to the nature of independent content, VT cannot guarantee content validity.
We ask you to Read Our Content Policy so a clear comprehension of VT's independent non-censored media is understood and given its proper place in the world of news, opinion and media.