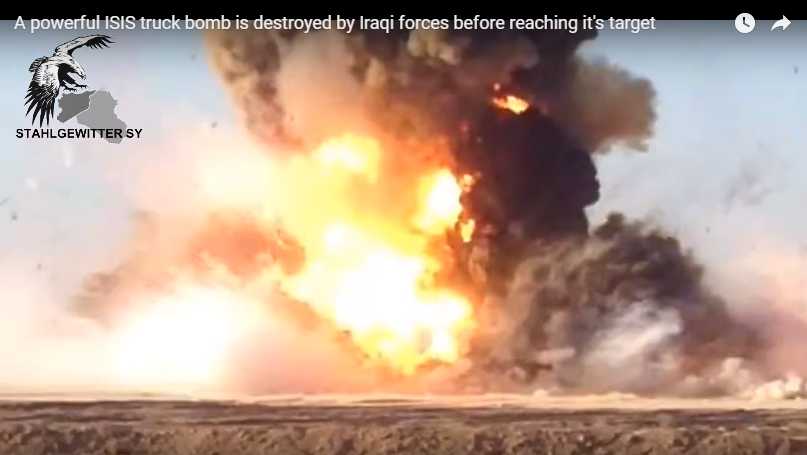 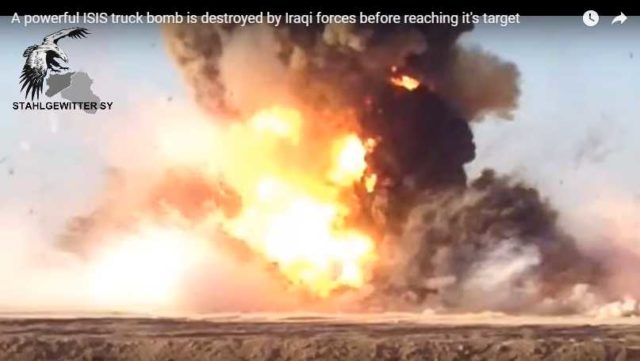 [ Editor’s Note:  This is the big bang for the day, and one hell of a big target. I was surprised to see that none of the Iraq heavy machine guns or 20mm’s were able to knock the truck out, or that they had no TOWS available for such critical defense roles when ISIS has been using truck bombs in standard military attacks for several years, their version of the rolling cruise missile… Jim W. Dean ]

Footage has been posted online of a truck suicide bomb destroyed before it could do any damage by Iraqi fighters with a rocket propelled grenade. The video was shot during the battle for Ramadi in Iraq, which is some 110km west of the capital, Baghdad.

–
A truck belonging to Islamic State (IS, formerly ISIS/ISIL) carrying explosives, was heading towards a government compound, presumably with the driver intending to blow it up to inflict maximum damage.

Iraqi forces had their men positioned to intercept the truck and just as it was getting a bit too close for comfort, a soldier armed with a rocket propelled grenade (RPG) took the vehicle out.

This is the first time that footage has emerged from the Iraqi side of this particular incident and tells the whole truth about what happened. Previously the only videos of the incident had been published by IS and used in propaganda videos claiming the attack had been a success.