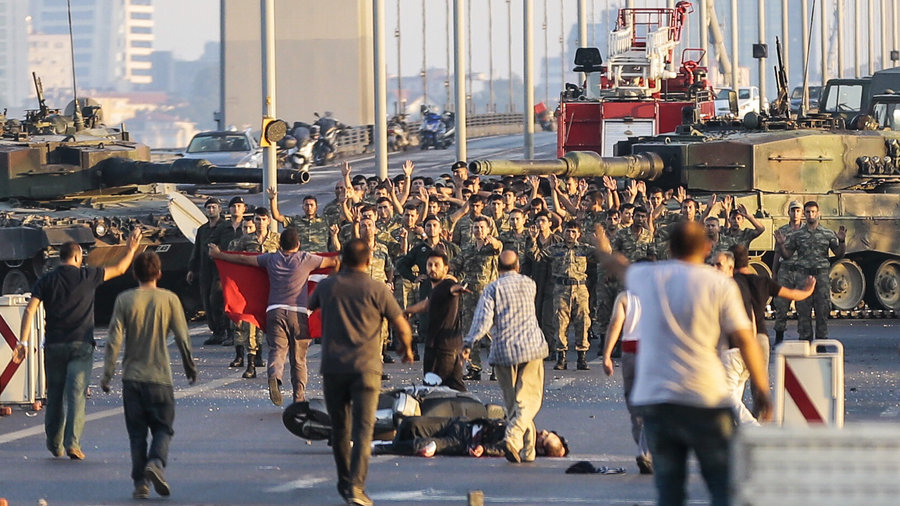 “People never lie so much as after a hunt, during a war or before an election.” ~ Otto von Bismarck

[ Note:  The reports that the Erdogan regime was aware of the coup attempt and due to its weakness allowed it to go through so it could be used as a total elimination of his remaining opposition inside the government may never be validated for sure.

But the swiftness of the purge in the judiciary had the strong smell of a prepared enemies list to it.

That this all took place in the middle of a Turkish foreign policy shift makes it even more bizarre, including claims that the US supported the coupmeisters, something that never would have happened with evidently so little support within the military itself.

A few thousand soldiers are never going to overthrow a half million man army, which does not even include the reserves.

No charismatic leader ever emerged as a rallying figure head, so there was effectively no real leadership in the coup for even a Hail Mary attempt at success. Who would have supported an anonymous group? All the coupmeisters did as to hand their heads and the remaining oppositions heads over to Erdogan on a silver platter. You just can’t make this stuff up… JD ]

The Turkish military coup caught the world by surprise when it was triggered in the middle of some major shifts in Erdogan’s foreign policy. The classic number one question of “why now?”, has yet to be answered. But the number two question of “Who benefits?” already has. Mr. Erdogan does.

Following the ill-prepared and executed keystone cops’ coup attempt that we watched most of Friday night and Saturday morning, we are now seeing Erdogan’s counter coup roll forward with power and precision, almost as if following a prepared plan.

He has openly declared he is going to clean out all supporters of the coup, but we know that really means cleaning out all of his democratic opposition.

The speed and breadth of Erdogan’s counter coup surprised even old Cold War Intel analysts. The number of 2839 soldiers and officers arrested came as no surprise, other than the not insignificant detail that, out of 500,000+ members of the Turkish military, not counting the reserves, they had no chance in hell of being successful, to the point where one would think they are recruited from the military’s insane asylum.

Initially, the numbers included 29 colonels and 5 generals. Rear Admiral Nejat Demirhan and General Memduh Hakbilen, Chief of Staff of the Turkish Aegean command were reported to be among them.

The numbers of those detained by Sunday evening, as I am typing, is up to 6,000, as stated by Turkish Justice Minister Bekir Bozdag in a television interview cited by AP. But for perspective, we have to keep in mind that in the CIA-backed coup of 1980, over half a million Turkish citizens were arrested.

The mind blower came with the release of the mass firings in the judiciary among not only judges but the prosecutors, with a total of 2745 being suspended so far, as announced by the Anadolu News Agency. Such an action could not possibly have been the result of active knowledge of the coup, but from a judicial “enemies list” that Erdogan’s security people had been keeping of those known to be opposition supporters.

But it gets worse. The decision to sack the judges was made at an extraordinary meeting of Turkey’s High Council of Judges and Prosecutors (HSYK), a NTV broadcaster reported. Five members were removed from the HSTK itself, whose head is the Turkish Justice Minister. Additionally, Turkish prosecutors have issued arrest warrants for 140 Constitutional Court members and 48 members of the Council of State. The arrests have already been made.

So while the coup participant numbers in the military are just a bump in the road, we are seeing what appears to be a full purge of the judiciary to give Erdogan and his party full control of the courts, hardly an act of democracy in anyone’s book.

The Turkish government was getting the anticipated foreign government statements of support, but those came only after there was time to measure the scale of the coup to see if most of the military was behind it.

This news came early in the coup, via General Umit Dunbar, Cmdr. of Turkey’s First Army, who reported at 10:27pm Friday night that those behind the coup were a small faction and there was “nothing to worry about.”

Earlier in the evening, around 8pm, he stated that the coup had been rejected by the senior command and that the coup participants came from Air Force troops, and some of the gendarmerie and armored elements.

Iran was quick to show its support against the coup, but I wonder if that would have been the same if Erdogan was effectively running his own coup-rigging elections, purging the judicial system of all opposition supporters, and charging Kurdish MP patriots with supporting terrorism for objecting to the renewed war against the Turkish Kurds. Iran knows what it is like to be charged with no proof, as it was with the two decades of hoax charges of its non-existent nuclear weapons program.

John Kerry was quite expressive of his support for Ankara, but then equally angered on Saturday when Turkish Labor Minister Süleyman Soylu claimed that Washington was behind the attempted coup. Ouch! That is hardly a statement that Soylu would have made without clearing with Erdogan.

The plot to target the US was confirmed by later statements blaming the Gulen organization for being behind the coup, with the US tangentially responsible for having given Gulen “protection”, which is quite a stretch. Turkish demands to have Gulen extradited were quick to follow, but with no confirmation about his involvement.

The EU was focused in their response. EU Council President Donald Tusk, along with the leaders of France and German, advised Turkey to deal with the coup plotters through the appropriate legal mechanisms, as reports of reinstituting the death penalty for the coup participants had surfaced early.

Tusk stated, “The key question will be what kind of Turkey emerges from this crisis…it would be crucial not only of Turkey but the whole region, including EU and Turkey relations…. The tensions in and the challenges for Turkey can’t be solved with guns.”

Germany’s Angela Merkel had similar remarks to France 24 TV, “Those responsible for the tragic events of last night should only be handled according to the rule of law…Democracy which respects everybody’s right and protects minorities, is the best foundation.”

There is of course massive hypocrisy in both their statements and Kerry’s about being anti coup. The US has used coups as a key tool of its foreign policy during the Cold War, and now employs its new and improved “soft power and proxy terrorist version” to replace governments on its do-not-like list.

None of these three leaders have chastised Erdogan for his support of the terrorist coup against Syria, despite the bloodbath and destruction there. And all three of their intelligence networks are fully aware of Erdogan’s support for some of the terrorist factions fighting Assad and the Syrian Army. It is revolting to hear the term “rule of law” come out of their mouths.

Some individual stories are beginning to emerge. One of the top leaders taken hostage early in the coup was Chief of Staff, General Hulusi Akar. Reports claim he was helicoptered to Akincilar air base northwest of Ankara, but was later rescued on Saturday, which must have been a Special Operations quickly organized plan put together on the fly, and will most certainly be an amazing story if we ever get the details.

The flip side to that was the troops who were not even clued in, but told they were doing operational maneuvers, something not unusual after all the terrorist attacks. I knew something was wrong when I saw the two trucks of soldiers with light weapons blocking the Bosporus Bridge coming into Istanbul.

They did not have even one armored car or a heavy machine gun that I could see. They could have been dusted off that bridge by one tank, or an Apache helicopter making one 30mm gun run on them.

They were being used as cannon fodder in the “Hail Mary” pass coup attempt, which will go down as one of the most inept in modern history.

Barely covered in most of the coup news is the financial and economic fallout. Bloomberg is reporting that the coup and its aftermath could have long-term negative financial consequences, as Turkey relies on investment for its balance of payments stability. The Turkish lira has dropped 4.5%, to an eight-year low.

Unnoticed in all the war and terror news with Syria is how Erdogan had been purging his top economic advisers.

The Erdogan regime has an established record of not accepting any responsibility for its mistakes, but choosing among the available scapegoats to pin the blame on, and this most likely will continue. Investors and financiers do not like to deal with leaders who live in fantasy land, as the rent is very expensive and its pleasures fleeting.

We wish God speed to all the innocent Turkish people caught in the middle of this, and the Syrian refugees at the bottom of the barrel there. They have suffered enough. But they also will be held responsible for the leadership they chose, and in the end, can blame no one but themselves.