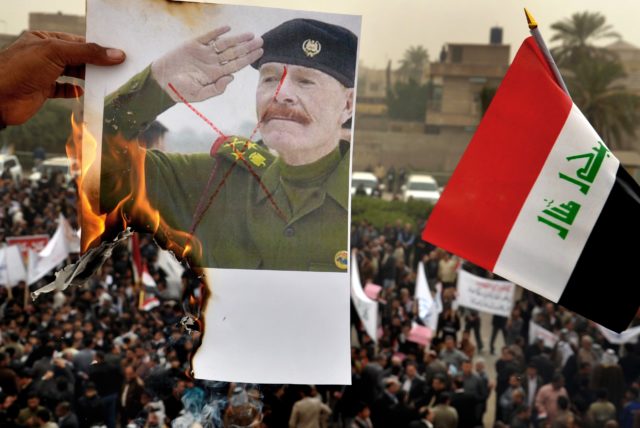 Anfal crimes are those committed by Baathists under direct orders from Saddam Hussein against Iraqi Kurds between 1988 and 1989, where they killed and exterminated more than 180,000 people.

According to official statistics, during the first seven months of operations nearly 4,200 villages were demolished  and nearly 182,000 of armless Kurds residents exterminated in the areas of Kirkuk, Diyala, Nineveh and Salahuddin.

According to UN and many Human Rights Watch reports these crimes were classified as the most horrific crimes that Baathist regime committed against Iraqi Kurds in the region of Kurdistan. It must be mentioned the forced evictions carried out by Baathist forces in the villages of the two cities of Jmajal  and Kalar (Halabja, Al-Tawelah, Khurmal, Sayed Sediq, Penguin, Dezah Castle, Sankser, Jwarna, Kalajulan and Mawhet) where many Kurds have been displaced and fled to neighboring countries.

Here must be mentioned the chemical attack carried out by Baathist forces on the village of Halabja that killed most of those who were in the village at the time.

After the US occupation of Iraq and the arrest of Saddam Hussein and several of his aides who were convicted of crimes against humanity and genocide in Iraq Special Court for Iraqi officials Crimes.

Iran Mojahedin eKhalq Organization  (rather Khalq hypocrites as they should be called) were involved in the aforementioned crimes that has the support and care of many countries advocating Human Rights. What is ironic about this organization that claims religious commitment is its activity in a country like France, the state in which Muslim women nationals are prevented from wearing headscarves or carrying out religious ceremonies in official circles.

Saudi Arabia the state that boasts of supporting and protecting terrorists groups in the region, with no doubt, is  the most important supporter of the terrorist organization whose hands are stained in the blood of more than 17,000 Iranians.

Khalq Hypocrites organization is significantly active in the French capital holding conferences and official meetings, of which the most recent brought together organization’s leaders and  Saudi Prince Turki Al-Faisal.

Here are some questions that pose themselves:

Why Hypocrites Khalq are not prosecuted for their participation in crimes committed against the Kurds in Iraq, the same way Saddam had been?

Are the crimes committed by Hypocrites Khalq Organization against the Kurds and less in atrocity and violence than  the myth of the Holocaust claimed by the Jews?

Unfortunately,  this organization is still active in the sponsoring countries in the silence of  human rights organizations and others. No verdict has been issued against this terrorist organization either.