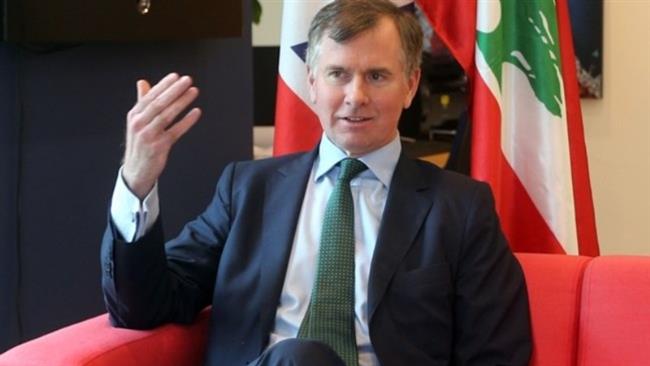 Britain’s ambassador to Lebanon says the Lebanese resistance movement of Hezbollah cannot be blamed for fighting terrorists in neighboring Syria.

“Given the threat posed by Daesh against Lebanon, Hezbollah cannot be reprimanded for being present in Syria,” Hugo Shorter said in remarks translated from Arabic.

“It is natural for one to be concerned about the threat,” he said, adding, “We, however, trust the Lebanese security apparatuses and their performance,” according to Lebanon’s al-Ahed news website.

Lebanon has been sporadically affected by the foreign-backed militancy that has gripped Syria since 2011.

Daesh and al-Nusra Front — which is the Syrian branch of al-Qaeda — have been active on the outskirts of the Lebanese town of Arsal, located on the border with Syria.

The militants briefly overran Arsal in August 2014, taking several Lebanese army and police forces hostage, some of whom were executed. In December last year, most of the captives were released as part of a prisoner swap deal.

Hezbollah says its military role in Syria is aimed at preventing the spillover of the acts of terror in Syria into Lebanon.

On Thursday, Hezbollah fighters targeted Daesh positions on the northern outskirts of the village of al-Qaa on Lebanon’s northeastern border, causing an unspecified number of casualties.

The village was targeted last month by eight suspected Daesh bombers. Following the attack, which killed five villagers, Hezbollah said it had killed the local Daesh leader in charge of operations on al-Qaa’s outskirts.