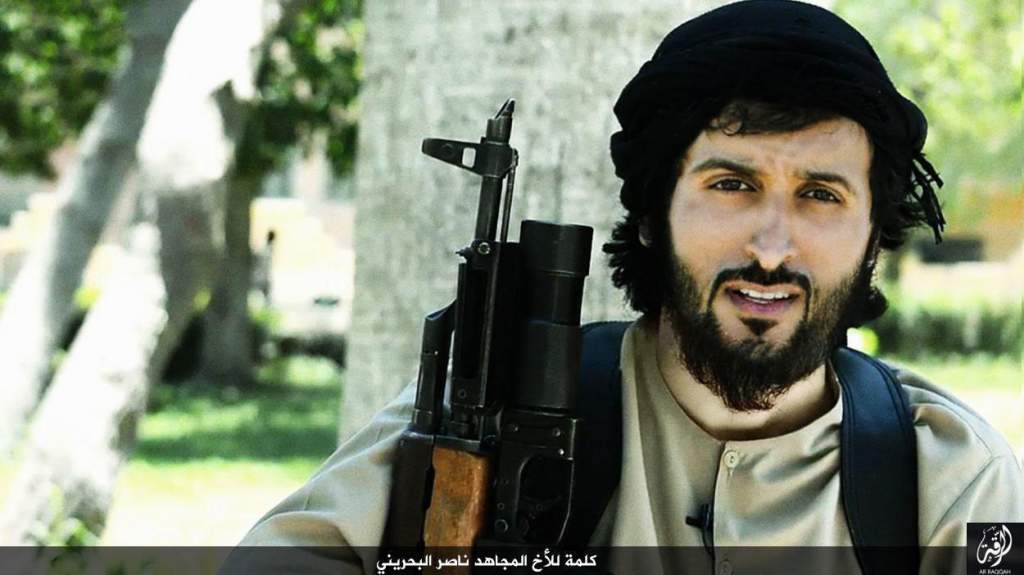 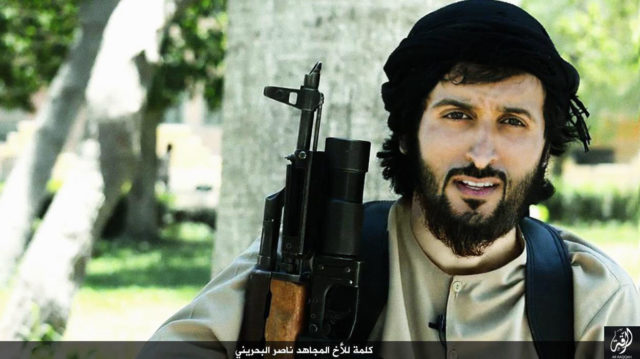 (Dubai, United Arab Emirates) — Prince Nasser bin Hamad al-Khalifa ,the fourth son of the Bahraini King and the charming commander of Bahrain’s Royal Guard has recently defected  and fled to ISIS-held territories  via Turkish border . In a message to his fellow countrymen , he exhorted them to mass exodus and mutiny to join the ranks of self-proclaimed Islamic caliphate which controls large swaths of territory in war-torn  Syria , namely Iraq’s second-largest city and home to a half million people.

“As a scion of a royal family, there was always an army of obsequious servants catered to my every desire while lavishing fulsome and empty praise upon me, though I began to ponder over the invented calamities which are all concocted by western crusaders, particularly American unbelievers,  wreaking havocs in our countries with the aim of plundering our natural resources and annihilating our traditions,” Amaq News Agency of the Islamic State in Iraq and Syria (ISIS) quoted the 29-year-old Bahraini fugitive prince as saying.

I left my beloved children, sumptuous palace and affluent life, added Prince Nasser, to fight with crusaders and Shiite infidels and defend my faith and dignity but much to my chagrin, my father, a puppet dictator, became an American lackey who turned Bahrain to an American Navy base; he must abdicate at once and pledge allegiance to khalīfah Abu Bakr al-Baghdadi [ May Allah Protect Him].

The U.S. Navy’s Fifth Fleet is located in Bahrain, a tiny Persian Gulf Kingdom. But these days Bahrain is completely engulfed by regime’s suppressive policies against its pro-democracy movement as al-Khalifa regime crossed all lines by stripping a highly revered cleric Isa Qassim from his citizenship. Mr. Qassim prefers peaceful ways to face regime’s increasing brutality against the majority of Bahrain’s 1.3 million population. 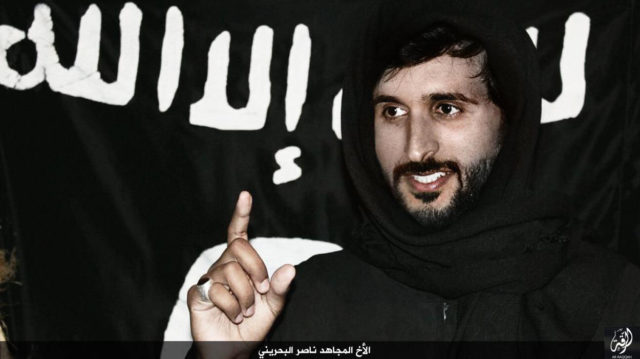 In Mid-February 2011, a democratic and peaceful upraising erupted in Bahrain which is widely believed to be inspired by similar democratic movements in other Arab countries demanding governments to improve their citizen’s universal rights. However, the Bahraini regime used brutal force— by using Pakistani mercenaries— to crackdown on peaceful pro-democracy activists and when the king failed to suppress the nation’s peaceful revolution, the Bahraini regime —which is run by a single family, virtually like Middle Ages–asked for help from the big brother, neighboring Saudi Arabia to quell the popular uprising.

Families of political prisoners reported  horrible tortures and sexual abuses occurred at the interrogation sessions in infamous al-Howdh al-Jaf prison which in certain cases , eye-witnesses corroborated previous claims that animals ,  giant German Shepherd dogs ,have been used personally by Prince Nasser to mock, intimidate and draw forced confessions from the female prisoners. No charges were brought against him in Bahraini courts.

“My father is a timid and pusillanimous so-called king desperately clinging to his American masters in order to save his throne. He practically handed over our country’s independence and sovereignty to American unbelievers. Unfortunately, he is just my biological father but the truth is that my spiritual leader and ultimate mentor is the Esteemed Amir al-Mumineen [Commander of the Faithful] Abu Bakr al-Baghdadi,” added the former  president of the Bahrain Olympic Committee.

Criticizing his father’s relatively gentle handling with revolutionaries, Prince Nasser became the subject of serious allegations of torture of arrested activists by various Human Rights organizations.  According to Amnesty International fifteen unnamed individuals reported to human rights groups in Europe that they had personally been barbarically beaten by Prince Nasser in al-Hawd al-Jaf prison.