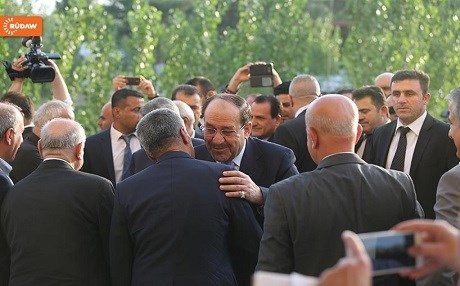 Former Iraqi prime minister Nouri al-Maliki welcomed by PUK leaders in Sulaimani. Photo: Rudaw
ERBIL, Kurdistan Region—Iraq’s former Prime Minister Nouri Maliki has reportedly asked two Kurdish groups to join his State of Law Coalition in the parliament in an effort to secure the number of seats needed for a new term in office after he was removed in 2014 following ISIS takeover of Mosul, sources close to the Patriotic Union of Kurdistan (PUK) told Rudaw on Saturday.

The alleged call for support came during Maliki’s recent trip to Sulaimani in the Kurdistan Region where he had meetings with both the PUK and the Change Movement (Gorran).

“Obviously it is no news for us in the Iraqi parliament, this has been going on for sometime,” says lawmaker Renas Jano from the Kurdistan Democratic Party (KDP) which has been at odds with Maliki’s Daawa Party over power sharing and oil contracts since late 2008.

The ruling KDP and the Kurdistan Regional Government (KRG) have in the past repeatedly accused Maliki, a Shiite, of accelerating sectarian tensions in Iraq by imposing discriminatory policies against the Kurds and the Sunnis in the country.

Tensions between the KRG and the Iraqi government under Maliki peaked in February 2014 as Baghdad froze Kurdish share of national budget, an estimated $1 billion. The KRG has since struggled to finance its staggering public servant expenses and the war against the Islamic militants through international loans, austerity measures and its own oil export.

The KDP has publically criticized PUK and Gorran’s talks with Maliki in Sulaimani last week and calling it as “harmful for Kurdish interests in Iraq.”

But PUK lawmaker Kawa Muhammad told Rudaw his party and Gorran tried to mend their ties with all Iraqi groups including the Dawa Party of Maliki.

“We think the policies of the KDP and the KRG were wrong in addressing the issues with the central government and forced our allies and friends in Baghdad to abandon us,” Muhammd said and added now they wanted to join a coalition if it is in the interest of the Kurds.

The political bargaining takes place amid rising criticism of the current Prime Minister Haidar Abadi for what many have described as his inability to contain corruption in Iraq.