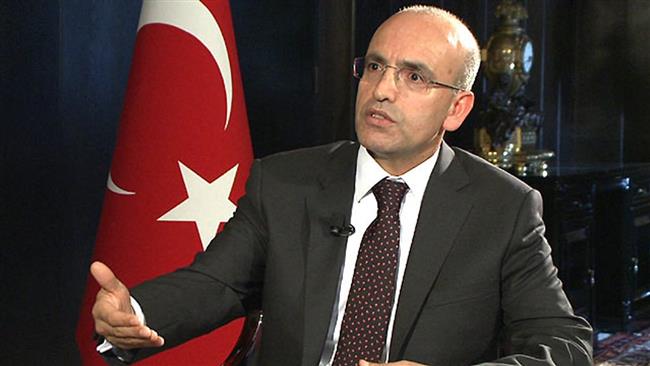 The Turkish deputy prime minister says pilots involved in the downing of a Russian jet last November had a role in the recent failed coup in Turkey.

“I would like to make it clear for the Russian public opinion that the pilots who downed the Russian aircraft were later involved in the military coup attempt. Thus, we have faced a certain secret plan,” Mehmet Simsek said on Saturday.

It insisted at the time that the Turkish military was justified in shooting down the plane because it had “violated” Turkish airspace.

Then-Turkish Prime Minister Ahmet Davutoglu said back then that the military’s downing of the Russian plane was “fully in line with Turkey’s rules of engagement.”

Simsek further said the downing of the Russian aircraft “was not political.”

“We are happy that friendly relations between Russia and Turkey are restoring. Russia is a major neighbor and trade partner. We pay special attention to all-out Russo-Turkish relations, not just trade, mutual investment and tourism,” Simsek said.

A crisis emerged in relations between the Ankara and Moscow after Turkey shot down the Russian bomber on November 24, 2015 as it was conducting an anti-Daesh mission in Syria. Turkey said the jet violated its airspace, a claim that Russia has rejected.

One of the two pilots of the Russian jet — both of whom had parachuted out of the aircraft — was killed by militants on the ground in Syria. The other was rescued.

In June, Russia said it had received a letter from the Turkish government in which the latter apologized for the incident. Ankara denied having offered an apology, saying that it had only “expressed regret” over the incident.

In a separate development, Turkish Prime Minister Binali Yildirim has described the plotters of the July 15 coup attempt in Turkey as “sick terrorists.”

He repeated the Turkish government’s accusation against the US-based opposition cleric Fethullah Gulen that he was responsible for the coup, saying Gulen would see no barrier to misinterpret religious principles to justify the bloody coup attempt.

“These people are terrorists. They are sick terrorists who abuse Islam,” Yildirim said.

Yildirim said Turkey’s National Intelligence Organization (MIT) had warned the country’s army hours before the coup attempt, but military commanders did not take any preventive measures.

“Even the Chief of the General Staff General Hulusi Akar was taken hostage. This is very worrying,” the Turkish prime minister said, arguing that he is still wondering why nobody informed him of the plot.

Turkish President Recep Tayyip Erdogan said on Thursday that the death toll from the failed coup attempt had risen to 246 people, excluding the coup plotters, and that 2,185 people had sustained injuries.

According to the latest judicial figures compiled by the state-run Anadolu news agency, a total of 5,613 people are held in custody over the failed coup.

An unnamed prosecutor in the capital Ankara said early on Saturday that authorities had released 1,200 soldiers, marking the first key measure of its kind after the failed military coup.

Turkish officials have launched a large-scale crackdown following the attempted coup d’état. A three-month state of emergency has been declared in Turkey.

Turkey’s Ministry of National Education announced in a statement last Tuesday that it had dismissed 15,200 of its employees from their jobs over their alleged involvement in the putsch.

The Turkish public broadcaster TRT also reported that the country’s High Education Board had ordered the resignation of 1,577 deans, including 1,176 in public universities and 401 in private institutions.